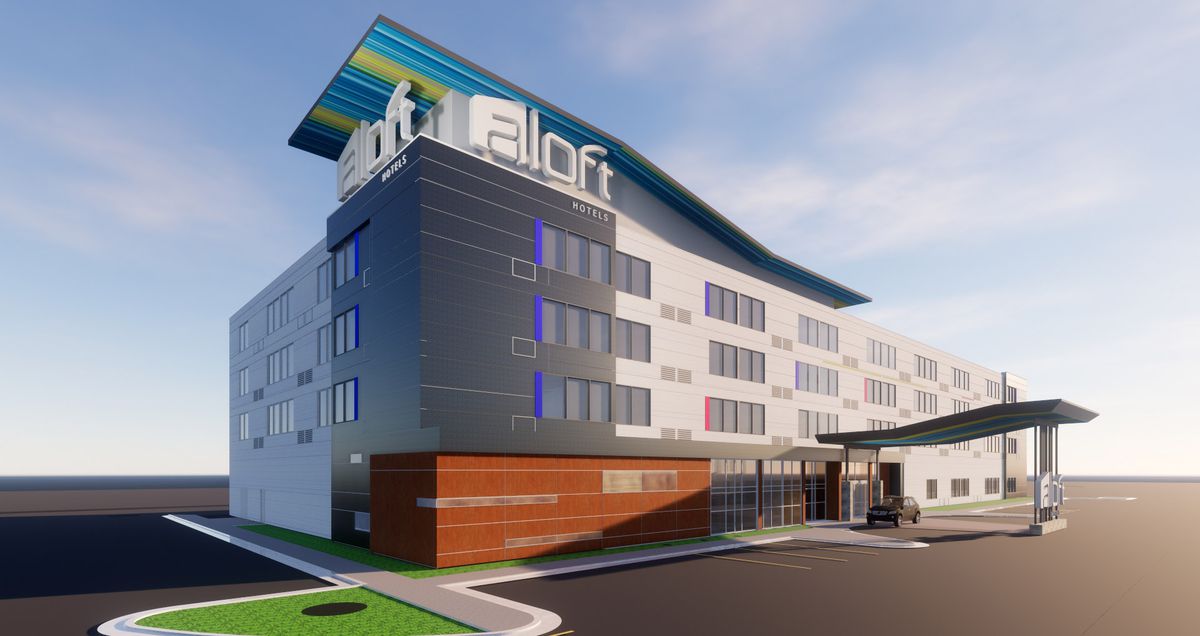 An Aloft Hotel is planned for Midtown Anchorage at 36th and C Street, to open in 2021. (Conceptual drawing provided by JL Properties)

An Aloft Hotel is planned for Midtown Anchorage at 36th and C Street, to open in 2021. (Conceptual drawing provided by JL Properties)

A $16 million, four-story hotel is planned for construction at a busy intersection in Midtown Anchorage.

It will be the first development in Alaska to benefit from a new federal tax incentive program, a project official said.

It will also be the first Aloft Hotel in the state, and its doors are scheduled to open in spring 2021, said Anton Villacorta, project manager for JL Properties. JL is owned by Anchorage developers Jonathan Rubini and Leonard Hyde.

The 85,000-square-foot hotel will replace the aging strip mall that was recently demolished at the southwest corner of C Street and 36th Avenue, he said. The building previously housed Federal Aviation Administration offices and Beacon, a workplace health and safety services company.

The hotel will add 146 rooms to support the growing tourism industry, in a neighborhood where a number of other hotels have been built in recent years.

The Aloft brand caters to a younger crowd, Villacorta said. High-tech rooms will have voice-activated features and door locks controlled by mobile phones. The brand has locations worldwide and is part of the Marriott International chain.

“They’ll feature a live event at least once a month with a local artist,” he said.

The project will be the first in Anchorage to benefit from tax incentives for areas designated as Qualified Opportunity Zones under federal law, Villacorta said. The program was created in the 2017 tax overhaul. It supports development in low-income areas, including in Midtown Anchorage and more than 20 other locations across Alaska.

But the company concluded that building the hotel under the tax program would bring more benefits to the Midtown area and Anchorage, such as jobs and a larger tax base, Villacorta said. The hotel could spark other improvements in the area, he said.

“I think our general hope is for other developers and owners to take advantage of that (tax program),” he said. “It’s intended to spur development for the area, and when you have new development you have economic benefits stemming from it.”

Permitting inspections for the project have been underway in recent days.

“The plans (for the hotel) are very well prepared, so the project is moving along expeditiously,” Bob Doehl, building official for the municipality, said late last week.

Officials with Aloft Hotels could not be reached for comment.

Another project, Hotel Indigo, is also moving through the city’s permitting process. The $60 million, 13-story project, with 178 hotel rooms and 32 apartments, is planned for downtown Anchorage. That project is not in an economic opportunity zone.

[$60 million boutique hotel and apartments to rise in downtown Anchorage]

The city has about 8,500 hotel rooms, but Alaska tourism is growing, said Jack Bonney, community engagement director at Visit Anchorage.

Several medium-size hotels have been built near the Aloft Hotel site in the last five years, adding hundreds of rooms to the area, he said.

But more travelers are arriving on planes and cruise ships and more may be staying longer in Anchorage, Bonney said. Demand for hotel rooms in the city is outpacing national demand.

“It’s been a good business proposition so far,” he said.