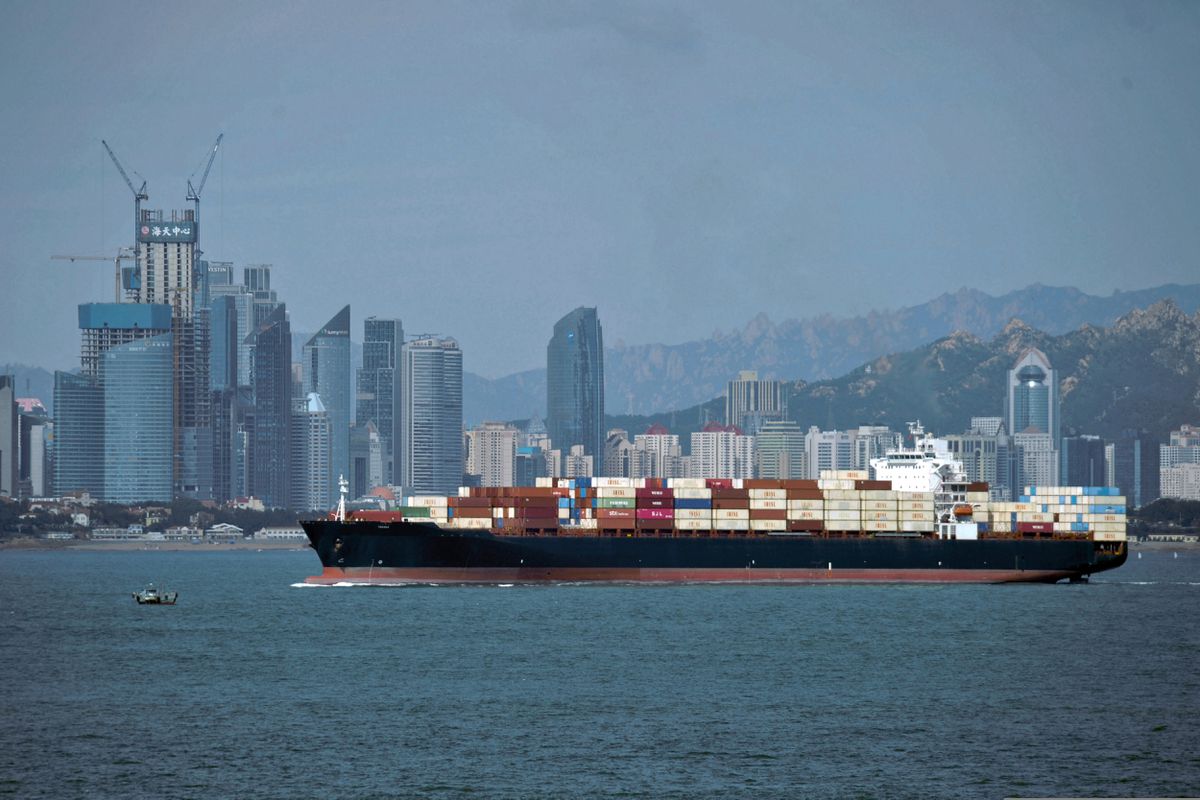 A container ship sails by the business district in Qingdao in east China's Shandong province. (Chinatopix via AP, File)

A container ship sails by the business district in Qingdao in east China's Shandong province. (Chinatopix via AP, File)

Seafood coming from and going to China is piling up in freezer vans and cold storage indefinitely as the coronavirus continues to cause commerce chaos around the world.

About 80% of trade of the world’s goods by volume is carried by sea, and China is home to seven of the world’s 10 busiest container ports, according to the United Nations Conference on Trade and Development.

Virus precautions mean that many ships can't get into Chinese ports, others are stuck at docks waiting for workers to return, and still more are idling in "floating quarantined zones," as countries refuse to allow crews of ships that have docked at Chinese ports to leave the boat until they have been declared virus-free.

China is the number one trade partner for the ports of Seattle and Tacoma where arriving ships are typically stacked with containers full of goods ranging from clothing and toys to electronics. Many would normally return to China laden with Alaska seafood and other U.S. products, but operations have slowed dramatically.

“Factories aren’t open and goods aren’t being made. We don’t know yet what that impact is going to be,” Peter McGraw of Northwest Seaport Alliance told KOMO news. “There have been a lot of blank sailings. That means a lot of canceled ships.”

Alaska seafood exports to China of nearly $1 billion include products for their own markets, but the bulk goes there for reprocessing and shipment back to the U.S. and other countries.

“If you have plants that have product coming in and no workers to fill it, you’re going to get that overflowing cold storage situation. So it’s definitely a problem on the reprocessing side. On the consumption side, if people aren’t going out to eat and going out to the market to buy seafood, that’s going to take consumption down as well. So there’s a couple different ways that it’s working against moving seafood through the supply chain,” said Andy Wink, director of the Bristol Bay Regional Seafood Development Association and an economist who has tracked world salmon markets for over a decade.

The situation also is diverting more seafood from elsewhere into the U.S.

“The big salmon farming companies are looking elsewhere to direct their products and the U.S. is the obvious choice,” he added. “So we've seen salmon prices on average down about 10% since the first of the year at the wholesale level.”

As the crisis builds potentially into the spring, many major fisheries with year-round selling seasons but shorter harvests, such as Alaska salmon, begin engaging in price negotiations and set dock prices, said market expert John Sackton of Seafoodnews.com.

“The price setting at the dock is based on packers’ and distributors’ expectations of price for the entire year, the supply and availability of what is landed, and the costs and business expectations of the harvesters,” Sackton wrote in his Winding Glass blog. “Regardless of what price is paid in May or June, packers are looking at what price they expect to get four, five or six months into the future. In normal years, this is fraught with risk. … This year, the risk is off the charts, because we simply don’t know how severe, economically or socially, the disruption from this disease may get.”

Alaska has worked hard to diversify its seafood markets beyond China since trade tariffs imposed in 2018 by the Trump administration cut into sales with its top customer. But the virus scare is causing disruption throughout new and more established sales regions, said Hannah Lindoff, global marketing director for the Alaska Seafood Marketing Institute.

“We have on the ground representatives conducting marketing activities to help raise the value of Alaska seafood products. However, due to travel bans and health concerns, several chef seminars in China designed to boost knowledge of different Alaska species planned for this month have been canceled. Additionally, events in Singapore and Italy were also canceled. ASMI continues to prioritize the health of our overseas representatives and partners in these regions and hope for positive news,” Lindoff said in an email message.

Air cargo operations have been differently affected, and “the cancellation of flights in and out of China has been so extensive that freight forwarders have had a very hard time finding any space at all on planes for their shipments,” according to the The New York Times.

U.S. shoppers could see items missing from store shelves as early as mid-April, Edward Kelly of Wells Fargo Securities told the Los Angeles Times. Big-box retailers such as Walmart and Target “could be the first to experience out-of-stock issues,” Kelly said. Of note: 80% of the drugs that Americans depend upon come from overseas countries, and China is the largest manufacturer.

Shrimp still tops! Salmon remains as America’s second-favorite seafood, following shrimp. Third among the Top 10 is tuna, according to the list compiled by the National Fisheries Institute based on data in the 2018 Fisheries of the U.S. report.

Push against plastics - The first ever major lawsuit and a proposed new law both aim to hold companies responsible for the endless streams of plastics they continue to produce. A lawsuit was filed Feb. 23 in California State Superior Court against Coca-Cola, Pepsi, Clorox, Procter and Gamble and several other major companies for polluting waterways, coasts and oceans with millions of tons of plastics.

The lawsuit was filed by the Earth Island Institute and Plastic Pollution Coalition. It claims violations of the state Consumers Legal Remedies Act, public nuisance, breach of express warranty, defective product liability, negligence and failure to warn of the harms caused by plastics to humans and animals.

The complaint also claims the average person ingests nearly 5 grams of plastics each week – the equivalent of a credit card. It also says plastics alter the chemical composition of the ocean when it breaks into smaller pieces and releases toxic chemicals into the water.

Meanwhile, on Feb. 11 a group of congressional Democrats from New Mexico, Oregon, California and New Mexico introduced the Break Free from Plastic Pollution Act of 2020.

The law would, among other things, require big corporations to take responsibility for their pollution; incentivize corporations to make reusable products that can be recycled; reduce wasteful packaging; create a nationwide beverage container refund program; reduce and ban certain single-use plastic products that are not recyclable; establish minimum recycled content requirements for beverage containers, packaging and food-service products, while standardizing recycling and composting labeling; and reform the nation’s waste and recycling systems.

The Plastics Industry Association calls the bill “misguided” saying it “is more interested in getting headlines than finding solutions.”

Today, 14 percent of oil and 8 percent of gas is used to make petrochemicals, the feedstock of plastics. The International Energy Agency predicts that within 30 years, 50 percent of the growth in oil demand will be related to petrochemicals. That means we are extracting fossil fuels, not for energy but for things like plastic soda bottles that we use once.