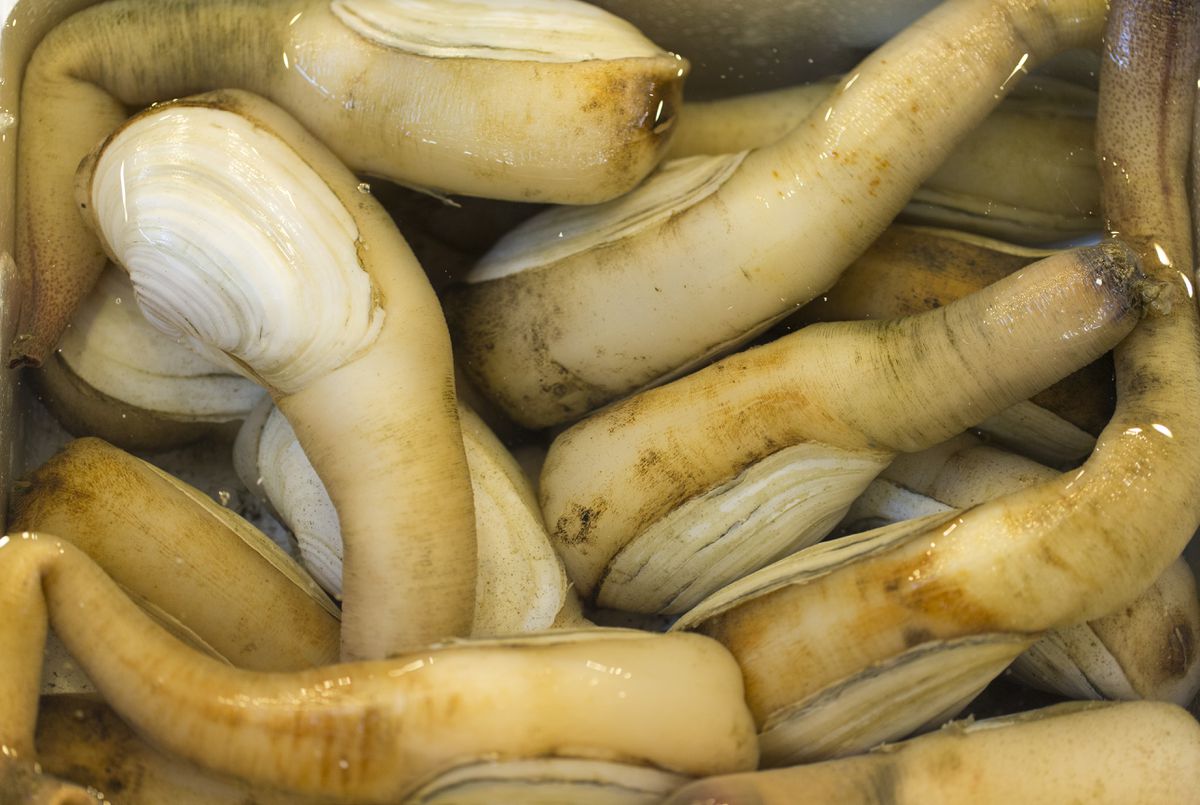 Alaska shellfish farmers and divers fear they won’t be “open for business” much longer if they’re forced to pick up the tab for federally required lab tests as outlined in Gov. Mike Dunleavy’s budget.

The Department of Environmental Conservation has proposed shifting the cost to the harvesters, which last year totaled almost a half million dollars.

Geoduck clam divers in Southeast Alaska, for example, pay about $150,000 each year to collect samples that are sent to the single federally approved laboratory in Anchorage and tested for paralytic shellfish poison and other toxins. Divers also pay $20,000 for water quality samples twice a year, and $8,000 to test for inorganic arsenic.

“And then we pay the Alaska Department of Fish and Game about $25,000 a year for them to do the management and assessment of the geoduck resource,” said Phil Doherty, co-director of the Southeast Alaska Regional Dive Association.

SARDFA is unique in that it is the only commercial fishing group in Alaska that is taxed through legislative action to pay for state oversight of the geoduck fishery, which is centered in the Craig and Ketchikan areas.

“We pay the department to do the work they need to do and we pay for all of the PSP sampling that needs to get done. We just don't pay for the lab costs,” Doherty explained.

The geoduck fishery harvests about 650,000 pounds each year valued at around $4 million to about 60 divers.

“Out of that $4 million, you take the 3% fisheries tax, So that is about $120,000 a year that goes to the state via the fisheries tax that goes into the general fund,” he said.

“We would not have the money to pay for that,” Doherty said. “And therefore, the geoduck fishery would close down. That would mean a loss to the state of $120,000 a year in geoduck fish taxes, $25,000 in ADF&G payments and $20,574 for Department of Environmental Conservation permits.”

Meanwhile, 50 or 60 geoduck dive boats and their crews have been beached for more than a month because their market in China is closed due to the coronavirus.

In a letter to the House Finance Committee and DEC Commissioner Jason Brune, Mesdag said, “Asking a nascent industry that produced $1.6 million in revenue last year to absorb $457,700 in program expenses will decimate shellfish farming in Alaska,” reported the Alaska Landmine.

“The state is fully on board with growing this industry; however, they seem to not understand that in order to do so, we must have the necessary infrastructure in place to comply with federal mandates, and it’s not the farmers responsibility, but a matter of public safety,” Mesdag said.

The Alaska Mariculture Task Force, created in 2016 with a goal of growing a $100 million industry in 20 years, opposes shifting the lab costs.

“This public health service assures that commercially available shellfish is safe for consumption. At the current size of the mariculture industry, the proposed fees are not financially feasible nor realistic. The rate increases will be devastating to the existing industry and will restrict future expansion,” the task force wrote in a letter to the legislative finance committees.

Should it pass, Alaska will be the only state that makes its growers/divers pick up the federal testing tab.

Mesdag also questioned Alaska’s high testing costs for samples from 26 Alaska shellfish oyster growers. She told the Landmine that Bigelow Analytical Services, a private nonprofit in Maine, told her they would do all of Alaska’s tests for $31,000 a year.

“The industry believes that we are actually subsidizing (Alaska’s) environmental health lab at $457,700 a year for a test that should cost $31,000 a year to operate,” Mesdag said.

Alaska legislators in the House rejected the proposal in the operating budget that passed last week, and it is now up to the state Senate – and the governor’s veto pen - to decide.

Warm bottom crashed cod - Warmer temperatures on the ocean bottom were key to causing the cod crash in the Gulf of Alaska. That’s the conclusion of a NOAA Fisheries study that connected low numbers of cod larvae, juveniles and adults to loss of spawning grounds in the 2013–2016 heatwave called “the Blob” – the largest warm water anomaly ever recorded in the North Pacific.

Pacific cod are unique among all cod species because they only spawn once in a season and have eggs that adhere to the ocean floor. Females can actually place their eggs in habitats with temperatures that optimize hatch success.

The Blob caused Gulf of Alaska waters to reach nearly 61 degrees, compared to a norm closer to 50 degrees. Right after, biologists saw no first-year cod.

“A lot can happen in that first year of life that we would like to learn more about how to predict whether or not these year classes coming through are actually going to survive. But there is always variability and uncertainty that we have to be braced for,” Laurel said in a previous interview, adding that data on young Gulf cod go back to 2005.

The research is providing a window into how the fish will fare in a changing climate, he said.

“It’s sort of a dress rehearsal for things to come. And it’s encouraging we had really responsive actions to this really drastic reduction in the population,” Laurel added. “I’m encouraged by that, but also tentatively nervous about what’s in line for the future.”

The report titled “Loss of spawning habitat and prerecruits of Pacific cod during a Gulf of Alaska heatwave” appears in the Canadian Journal of Fisheries and Aquatic Sciences.

Fishy winners - Bullwhip Hot Sauce was the biggest winner in the final round of the Alaska Symphony of Seafood competition in Juneau. The hot sauce, made with bull kelp by Juneau-based Barnacle Seafoods, took home the grand prize in a field of 20 entries, four of which were seaweed products.

The Symphony contest begins in November at Pacific Marine Expo, where all entries are judged by an expert panel and first-place winners are announced. Second and third place and the grand prize winners are kept under wraps until the Juneau event where legislators and others select their favorites in three categories: retail, foodservice and Beyond the Plate, which features items made from seafood byproducts.

For Beyond the Plate, Juneau’s WILD by Nature Alaskan Fish Skin Jewelry came in first, followed by Pescadots dog treats from Drool Central, a Mum and Pup Barkery of Anchorage.

Top winners were set to travel to the big Seafood Expo North America next week in Boston which was postponed due to the coronavirus.

The deadline is April 13; grant recipients will be announced on April 29.