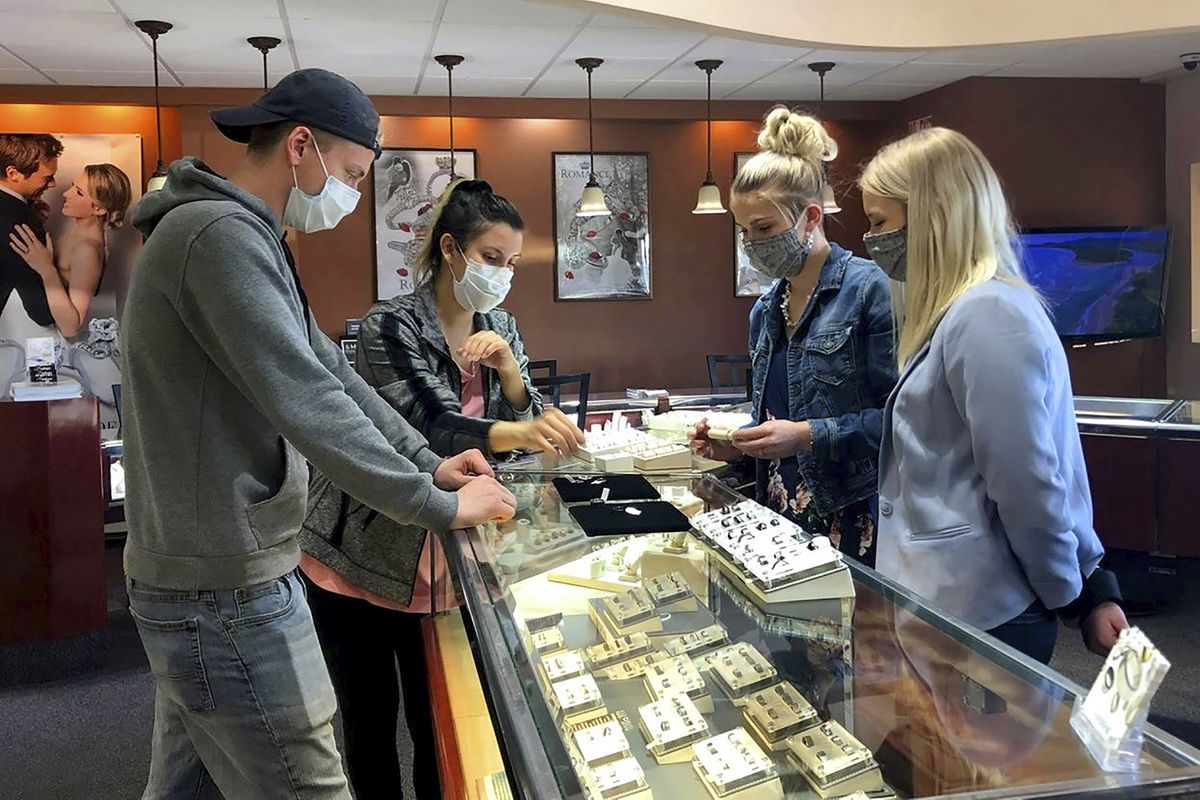 A couple picks out wedding bands at Bishops Jewelry Gallery in Fairbanks on April 22, 2020. (Sara Tewksbury/KTVF-TV via AP)

A couple picks out wedding bands at Bishops Jewelry Gallery in Fairbanks on April 22, 2020. (Sara Tewksbury/KTVF-TV via AP)

There is still nearly $150 billion left in the federal government’s primary program to help small businesses through the worst of the COVID-19 pandemic.

The Small Business Administration handled 4.4 million loan approvals totaling $511 billion nationwide through May 23 from the $660 billion Paycheck Protection Program, according to a summary report provided by the agency.

Intense demand caused the initial $350 billion approved by Congress to jumpstart the program in the CARES Act to be exhausted in mid-April after being available for just two weeks as small businesses across the country applied for the financial relief. Congress subsequently approved another $310 billion in PPP loan funds April 24.

Michael Huston, chief lending officer for Northrim Bank, said the Anchorage-based lender has processed more than 2,400 PPP loan applications and continues to do so, but demand has waned.

“There is money available. Those applications have slowed significantly since the first few weeks of the program but we do stand ready to help businesses that need the assistance,” Huston said in an interview.

Across Alaska, the SBA tallied 10,040 PPP loan approvals totaling just more than $1.2 billion before Memorial Day weekend, according to the report.

The program is meant to provide small employers — primarily those with less than 500 workers, with some exceptions — payroll funding for up to eight weeks following the receipt of the loan.

In multiple interviews and briefings following the passage of the CARES ACT, Sen. Dan Sullivan has stressed the desire in Congress to maintain the employer-employee relationship as much as possible through the worst of the pandemic-induced economic restrictions, and the PPP loans are meant to be a vehicle for that.

Huston said there are very few “fine print” restrictions as to which small businesses — and 501(c)(3) nonprofits and tribal organizations as well — qualify for a loan.

“For the most part it’s one-size-fits-all as long as you are an eligible business,” he said.

Seasonal employers, who make up a major portion of Alaska’s economy, can now choose to use any 12-week period between May 1 and Sept. 15, 2019, to calculate their PPP loan amount instead of the prior limitation of Feb. 15 to June 30, according to updated SBA rules.

The change is especially important for businesses that have peak activity in the summer, such as many tourism businesses in the state, as many do not have a full complement of staff early in the year but will still be hit hard by virus-related travel restrictions and consumer fears throughout the year.

There are a few more hurdles to get the loan forgiven, such as using at least 75% of the money for payroll or other fixed costs, but generally businesses that were eligible for a loan should be eligible to have some portion of it forgiven, as Congress intended, Huston said.

“Whether they’ll be able to get all of the amount forgiven is directly tied to how they used the funds,” he added.

Employers can also have their total of forgiven funds reduced if they have fewer employees on June 30 than during their reference period used to tally the loan amount, but SBA rules indicate exceptions for laid off employees who did not accept rehire and other circumstances.

Huston described the SBA’s 11-page PPP loan forgiveness application as being “a little bit like completing your 1040 tax return. They walk you through it and sure there’s going to be some questions that aren’t answered, but as the SBA and as the financial institutions are running into them on a consistent basis they’ll be able to get some answers to those FAQs that will help everybody else as they continue the process,” he said.

He also noted ongoing discussions in Congress regarding extending the loan forgiveness period beyond eight weeks along with changes to the repayment terms and 75% payroll expense threshold.

Currently, payments on unforgiven PPP loan amounts are deferred for six months and the loans have a maturity of two years with a 1% interest rate, according to the SBA.