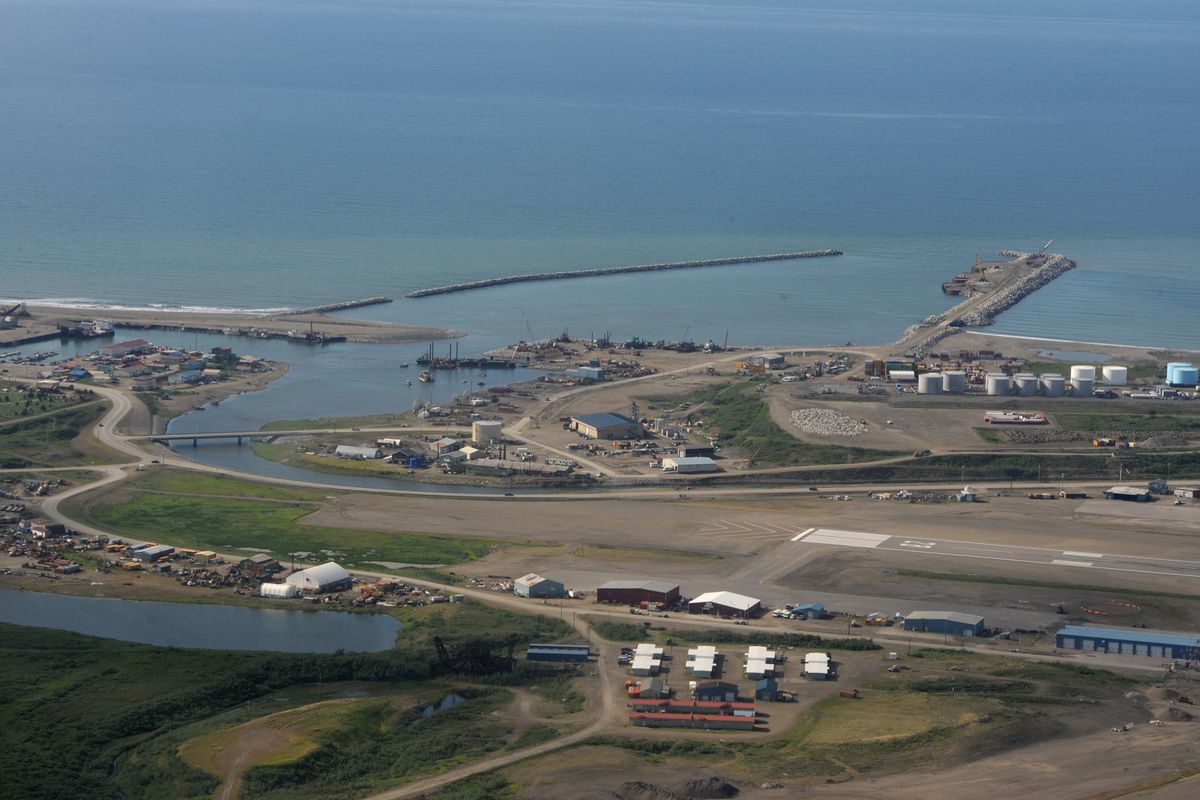 A long-sought plan for a deepwater port in Western Alaska appears to finally be gaining momentum.

U.S. Army Corps of Engineers commander Lt. Gen. Todd T. Semonite approved a $618 million plan June 1 to expand the Port of Nome, leaving approval from Congress as the last major hurdle for a project that many officials hope is just the first in a series of infrastructure developments in the region.

The Port of Nome Modification Feasibility Study is the latest iteration in a series of proposals made over the past decade to upgrade maritime facilities along Alaska’s largely undeveloped western coast.

“We’ve developed a feasible engineering solution that provides safe, reliable and efficient navigation improvement to support a critical region of the state. Delivery of this important infrastructure will help to strengthen commerce and national security in the Arctic,” Hibner said.

Earlier concepts to further develop Nome port or build a wholly new deepwater facility elsewhere on the Seward Peninsula were based on the expectation that the oil and gas industry was poised to start large-scale operations in the Beaufort and Chukchi seas.

In 2015 the Army Corps of Engineers released a $210 million plan to expand the area of protected water in front of Nome and dredge the area for larger vessels. The Corps’ work on that plan started as early as 2011.

However, when Shell announced later that year that its $7 billion Chukchi oil exploration effort had come up empty and it would cancel its offshore Arctic drilling program later, the corresponding plan to renovate Nome’s port to better handle oil and gas industry support vessels was scrapped as well.

Congress then turned around in 2016 and subsequently broadened the scope of potential benefits the Corps is allowed to evaluate when considering marine infrastructure projects in Alaska to include “the viability of regions,” rather than strictly looking at a direct and immediate cost-benefit review for a given project.

The latest plan — released in draft form in January — calls for roughly doubling the length of the port’s existing west causeway to reach approximately 2,100 feet farther into Norton Sound with a nearly 1,400-foot breakwater to protect harbor entrance from incoming waves. The L-shaped barrier would also hold two new 450-foot and one new 600-foot dock to handle the larger vessels that have started calling on Nome, according to Corps officials.

The bigger outer port basin would also be dredged deeper — from 22 feet currently to 28 feet — and the three new docks would be near the end of the longer west causeway-breakwater in an area dredged to at least 40 feet deep.

The 2015 plan called for adding 2,150 feet to the existing west causeway and dredging the harbor entrance channel to a maximum depth of 28 feet.

The primary benefit to residents of Nome and outlying communities would be potentially lower-cost goods brought in by larger vessels and to realize that local officials will likely need to contribute significantly to funding the project.

The $618 million price tag breaks down to $386 million funded by the federal government, largely for the in-water dredging and construction. The City of Nome would have to contribute nearly $123 million for the navigation features and another $128 million for infrastructure deemed “local facilities” such as access roads, docks, utilities and other things, according to Alaska Corps officials.

Nome Port Director Joy Baker wrote via email that local government leaders are working with consultants on a plan to fund the project from several possible sources, but they are not yet ready to disclose the details.

The 2020 American Water Infrastructure Act passed out of the Senate Environment and Public Works Committee May 11 containing language directing Corps leaders to expedite approval of the Nome project.

Sen. Dan Sullivan, who serves on the EPW Committee, said during a May 27 videoconference discussion hosted by Commonwealth North that members of Congress from other states are starting to recognize the need to focus attention on the Arctic as countries like China and Russia grow their icebreaker fleets and continue to grow their presence in the region that is believed to hold vast stores of energy, minerals and other resources.

“There has been an Arctic awakening, there’s no doubt about it. It is across the board; Democrats, Republicans, Senate, House and it’s coming up all the time,” Sullivan said.

Currently, Dutch Harbor is the only deepwater port in Western Alaska capable of being the homeport for large vessels — whether they are for research, spill response, search and rescue or industry.

The Alaska delegation, state lawmakers and Defense and Coast Guard leaders in the state for years have emphasized what they believe is a need for an Arctic deep-draft port in Western Alaska as shipping traffic through the Bering Strait increases as a result of the ever-receding sea ice.

City officials hope the project can relieve congestion at the port and generally make it easier for vessels of all sizes to utilize the facilities, according to Baker.

Baker also expects more activity at the port from fishing fleets as populations of cod, Pollock and other species historically confined by water temperatures to the southern Bering Sea move north with warming water over the long term.

Congress would still need to appropriate funding for the federal portion of the project in a spending bill even if it is ultimately authorized through the traditionally noncontroversial water infrastructure bill, as expected.