Thousands of Alaskans returned to work in May, but jobless claims remained ‘staggering’ 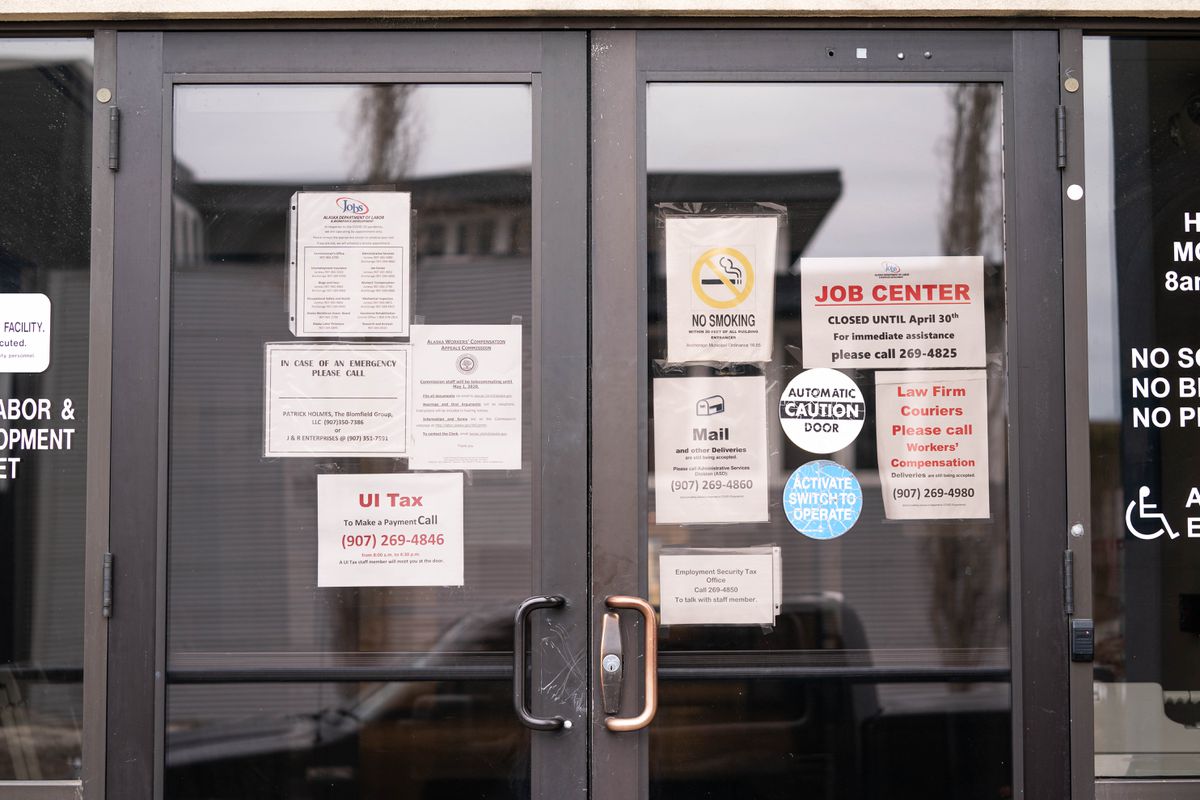 The Alaska Department of Labor and Workforce Development office in Midtown Anchorage on April 15. The building houses the Job Center, which provides services to out-of-work Alaskans. (Loren Holmes / ADN)

The Alaska Department of Labor and Workforce Development office in Midtown Anchorage on April 15. The building houses the Job Center, which provides services to out-of-work Alaskans. (Loren Holmes / ADN)

Data on Alaskans who stopped collecting unemployment checks in May indicate that the valuable oil and gas industry could be in for a longer recovery than other sectors, according to a state report released this week.

Employment in the health care sector, meanwhile, appears to be recovering more quickly than other areas of the economy, according to the July edition of Alaska Economic Trends, released by the Alaska Department of Labor and Workforce Development.

A record of nearly 55,000 individuals received unemployment benefits for at least one week in May under the state’s traditional program, according to Lennon Weller, a state economist with the department.

An estimated 17,000 self-employed individuals also received benefits in May. Those workers are newly eligible after Congress expanded the federal unemployment benefits program in March in response to the pandemic. But data for that program is more limited compared to the state’s traditional program.

Some 8,300 people came off the traditional unemployment rolls in May, after many businesses began reopening under loosened COVID-19-related government restrictions, according to the state report.

A snapshot of those workers suggests that relatively few who left the unemployment rolls were in the oil and gas industry, according to the state.

Overall, about 15% of claimants who weren’t self-employed appeared to have returned to work after they stopped filing for unemployment benefits in May, after receiving at least one check, according to a section of the report written by Dan Robinson, chief of research and analysis at the state Department of Labor.

But only 7% of the claimants in the oil and gas sector appear to have returned to work, based on the number in that industry who left the unemployment rolls in May.

The industry, where high-paying checks help support the broader economy, has been rocked by low oil prices caused in part by low demand as people stayed home during the pandemic.

For example, Oil Search, the company from Papua New Guinea moving to develop the large Pikka field on the North Slope, laid off Alaska workers in March and April, said Amy Burnett, a spokeswoman with the the company.

The company cut the number of employees and contractors by more than 40% in Alaska, to about 150 from 287 early in the year.

“While seasonal contractors associated with our winter drilling and exploration programs represent the majority, we have reduced full-time employees by about 15%,” Burnett said Wednesday.

Another round of layoffs by Oil Search, announced this week, did not affect the Alaska program, Burnett said.

The oil industry is in a unique spot compared to other businesses that were allowed to reopen, Robinson said.

It’s “clear that oil and gas job losses are less likely to be short-term than jobs in businesses that were temporarily forced to close,” Robinson wrote in the report.

“Oil is so different from a barber shop or gym that was ordered closed temporarily,” he said Thursday.

Oil prices that fuel the industry’s revenues remain well below what they were at the start of the year. It’s unclear when the prices will recover more fully to support a turnaround in the industry, he said.

The health care industry represented the largest percentage of claimants leaving unemployment rolls in May, after receiving at least one check that month.

About 25% of those claimants left the rolls, he said.

Elective surgeries that had been canceled were once again allowed, opening the door for some of those workers to return, he said.

About 15% of the claimants in the leisure, hospitality and trade sectors also left the rolls in May, he said. But the leisure and hospitality industry that includes bars and restaurants was the biggest group receiving benefits.

With COVID-19 cases spiking in the state, it’s unclear how long it will take until the economy can fully recover, Weller said.