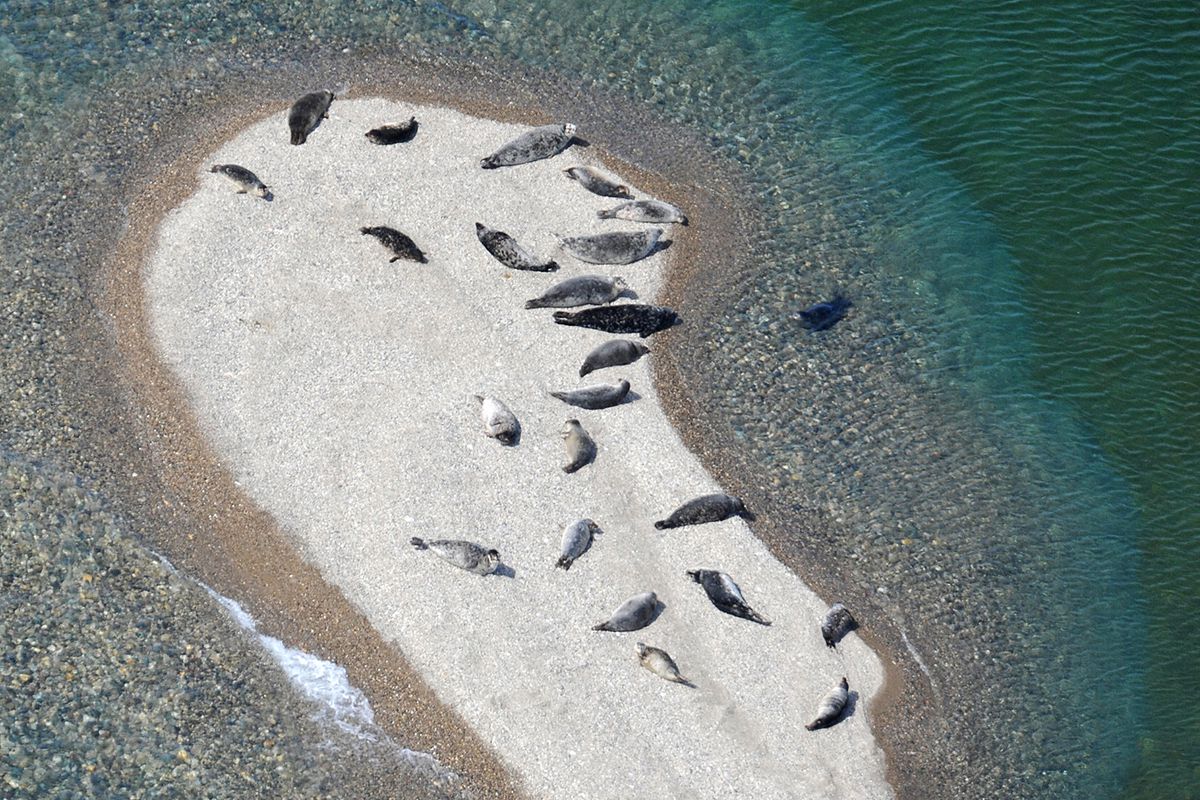 Freshwater seals are seen at Iliamna Lake in 2011. A last-moment change by the Army Corps of Engineers has added a land route to the proposed Pebble mine around Iliamna Lake rather than an all-weather ferry to cross it, drawing opposition from land owners in the area. (Dave Withrow/NOAA Fisheries)

Freshwater seals are seen at Iliamna Lake in 2011. A last-moment change by the Army Corps of Engineers has added a land route to the proposed Pebble mine around Iliamna Lake rather than an all-weather ferry to cross it, drawing opposition from land owners in the area. (Dave Withrow/NOAA Fisheries)

A new front is forming in the ongoing battle over the Pebble mine concerning lands up to 50 miles from the proposed project site.

Many opposed to the world-scale copper and gold mine insist the U.S. Army Corps of Engineers is affording the Pebble Partnership special treatment under the Trump administration, which they claim is now manifesting itself in a new transportation plan that Pebble currently doesn’t have access to develop.

On May 22, Army Corps Alaska District Regulatory Chief David Hobbie announced the agency had identified a road route along the north shore of Iliamna Lake to a port on the west side Cook Inlet as the least environmentally damaging practicable alternative, or LEDPA, for the expansive mining plan in its environmental impact statement review.

Until that point, Pebble had long promoted its plan for a year-round, ice-breaking ferry across the lake to shuttle supplies and metal concentrates to and from the mine site to the north of the lake.

The re-route was made to alleviate some of the concerns of area residents who feared the ferry could impact Iliamna’s unique population of freshwater seals and complicate winter travel across the lake ice among other concerns, Hobbie said at the time.

Pebble amended its plans to align with the Corps’ LEDPA decision and Tom Collier, CEO of the Vancouver-based junior mining firm noted the northern road route for years was the company’s preferred option — when it was officially advancing a much larger, 78-year mining plan — and the company only selected the ferry route because it was thought regulators would prefer the smaller wetlands footprint it offers.

The south ferry route allowed Pebble to utilize lands owned by Alaska Peninsula Corp., which the company has an access agreement with, for the roads and ferry terminals on the north and south sides of the lake to access a port at Amakdedori on Cook Inlet.

Pebble and Alaska Peninsula Corp. announced July 6 they have signed a memorandum of understanding to make APC the lead organizer of a consortium of other area village corporations to provide transportation and logistics support for the project. The companies estimate the MOU could be worth more than $20 million per year to APC during mine operations. APC leaders said the agreement would help provide locals with more opportunities to participate in the project.

However, some of Pebble’s staunchest opponents hold title to the land Pebble would need access to in order to develop the northern road and port corridor.

Alaska Native village corporation Pedro Bay Corp. owns much of the land along Iliamna’s northeastern corner and Iliaska Environmental LLC is a majority owner of a rock quarry at Diamond Point, the new location for the Cook Inlet port.

Iliaska Environmental is owned by the Igiugig Village Council and regional corporation Bristol Bay Native Corp. owns the subsurface rights to those lands. All three have been opposed to the project for years and stress Corps officials are ignoring the fact that Pebble does not have access to the area as well as their own precedent in similar, prior instances.

Pedro Bay Corp. CEO Matt McDaniel could not be reached for comment in time for this story but he wrote to Corps of Engineers Pebble project manager Shane McCoy last July to reiterate that the company “has not, and will not, consent to the Pebble Limited Partnership’s use of its lands for the Pebble project.”

As such, the north route should not be considered practicable in the final EIS, McDaniel wrote.

Eliminating the northern corridor option at this point would be a major problem for Pebble, as the Corps is scheduled to release the final EIS July 24.

McDaniel’s 2019 letter quickly spurred a memo from the Corps to Pebble requesting an analysis of feasible northern corridor options around Pedro Bay Corp. lands, but a consultant to Pebble determined there isn’t one through the mountainous terrain.

In October 2017, Hobbie signed a record of decision for an oil spill response facility proposed near Cordova and being pursued by the Native Village of Eyak that eliminated three alternative development sites because the landowners either would not sell the parcels or otherwise provide access to them for development. As such, the Corps did not consider the alternatives “practicable,” according to the decision document.

As for Pebble, however, the Corps continues to advance the LEDPA despite the objections from the landowners.

Hobbie said during a July 20 media teleconference that Corps officials are relying on Pebble’s assertion that the company can gain access to the northern corridor.

Corps Alaska District spokesman John Budnik additionally wrote via email that the Native Village of Eyak did not contend it could gain access to the lands needed for the alternatives discarded in its project.

Pebble spokesman Mike Heatwole wrote in an email that observers of the situation are likely confusing “preferred” with “practicable,” a legal term.

“Our preferred alternative has always been the ferry route; it remains the ferry route. One of the reasons that is so is that the land owners (Alaska Peninsula Corp.) had already agreed to our access,” Heatwole wrote.

“We continue to believe that the land owners will ultimately agree to the land access needed to construct the (northern) route.”