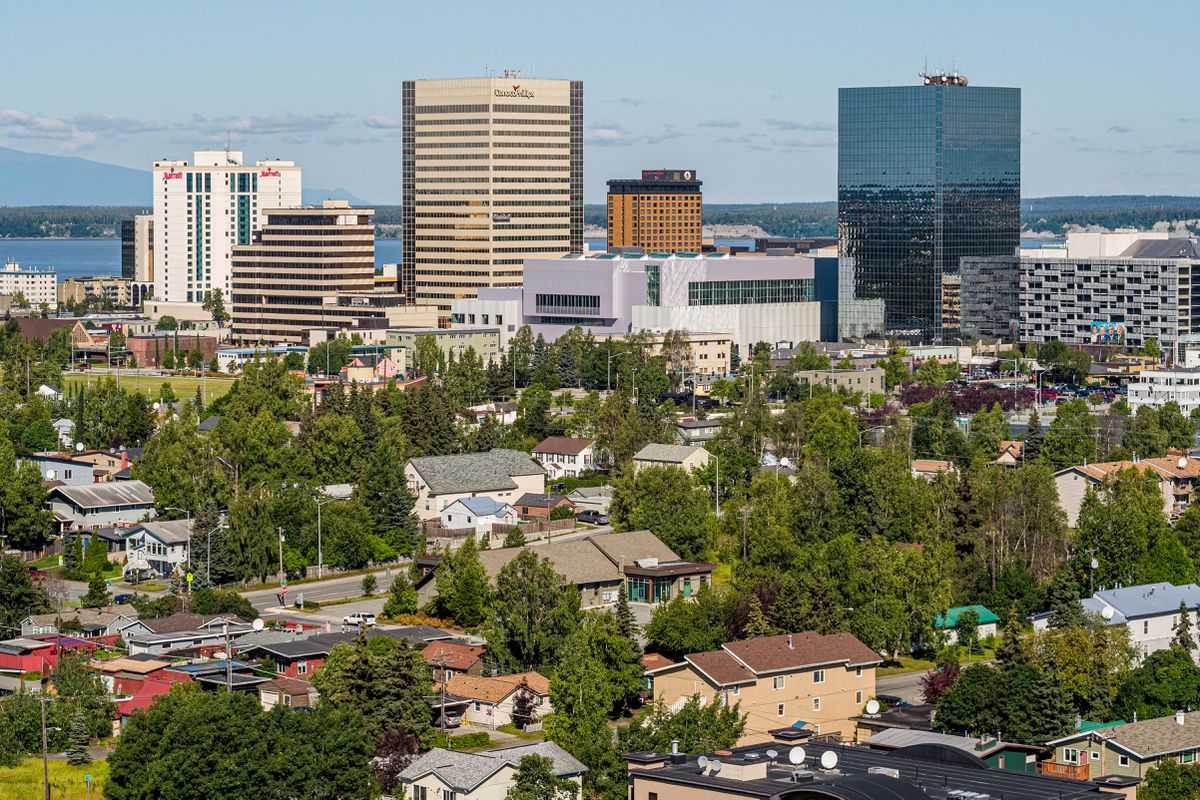 The Anchorage economy won’t regain its pre-pandemic footing even within three years as personal income, consumer spending and unemployment struggle to crawl out of the hole dug by the coronavirus pandemic, a new report projects.

After three straight months of unprecedented unemployment, and coming on top of a multiyear recession, Anchorage job counts will slowly recover starting next year, according to a three-year outlook released on Wednesday by the Anchorage Economic Development Corp.

But even in 2023 they will remain below last year’s employment levels by more than 4,200 jobs, the report projects.

Bill Popp, president of the AEDC, called the details a “sea of bad news.”

The annual forecast, conducted by the McDowell Group for 13 years, lists the timing of a possible COVID-19 vaccine as one of multiple caveats that could affect future numbers, given the unfamiliar path of an economy struck by a pandemic.

Popp said the research group dug deeper into details than in past years, an acknowledgment of the crisis’s severity after oil prices crashed and Alaska unemployment rates shot to record levels above 12%.

For weeks, more than 60,000 Alaskans have collected weekly employment benefits, about 17% of the workforce, according to state figures.

Anchorage is expected to lose more than 11,000 jobs by year’s end, Popp said.

“Historically there is no year on record in the modern history of Anchorage that comes close to the scale of these job losses in a single month or year,” he said.

“This is a staggering number to comprehend. In effect, all the job gains we have seen since 2001 have now been erased,” he said.

Because of the pandemic, total personal income in Anchorage will fall from last year’s high of $20.1 billion to $19 billion this year, he said.

The pace of the city’s recovery will depend in part on aid from Congress, the report said. Lawmakers are currently debating providing additional aid as many federal benefits run out.

With indoor business gatherings in Anchorage currently limited to 15 people, AEDC released the annual report in a virtual meeting on Wednesday. More than 1,200 people signed up for the online presentation, Popp said.

On the plus side, the report found that roughly $500 million in federal relief aid has flowed into Alaska to help buttress business and personal accounts.

There are bright spots, at least this year, Popp said:

• Single-family home values should hit a record $385,000 on average, up $10,000 from last year, amid historically low interest rates and a shortage of houses for sale as relocation plans halt during the uncertainty. Housing values aren’t estimated for future years in the report.

• Air cargo volume at the Ted Stevens Anchorage International Airport jumped a surprise 15% in April, May and June, compared to the same period last year. Many international passenger flights that previously carried some cargo were grounded, spiking cargo traffic for now, the report said.

• The federal employment sector will see a rise this year, with an additional 100 jobs or so thanks to hiring for the 2020 U.S. Census.

But “every other sector has lost jobs (this year),” Popp said.

Changing habits amid the pandemic will have long-term consequences for business activity. The report predicts:

• More people will work from home, limiting demand for commercial and retail space.

• Out-of-state tourists will remain wary of travel, continuing to harm businesses that depend on summer sales.

The report found that consumer spending has dropped 15% since January, compounding woes for an economy struggling from cruise ship cancellations and restrictions at restaurants, bars and other businesses.

The pandemic-driven job losses and a more rapid recovery in the Lower 48 could help reduce Anchorage’s population each year through 2023, continuing a long-term trend that has helped shrink the labor force.

Job losses in health care won’t recover until 2023, and for oil and gas and transportation until 2022, and even then just barely.

The gross value of oil production, critical to state income, will only reach $7.2 billion this year, less than one-third of the value of production a dozen years ago.

[‘I can’t afford to shut the doors again’: Anchorage restaurants and bars face another round of COVID-19 restrictions]

The leisure and hospitality sector, consisting of bars, restaurants and hotels, is the hardest-hit industry, the report says.

Jobs in that sector should end the year down by more than 5,000. That’s one-fourth lower than 2019 job levels.

Even in 2023, the sector will count about 2,500 fewer jobs than pre-pandemic levels, the report said.

Some restaurants are likely to close. Others may not return to full seating capacity without “a fully vaccinated population,” the report warns.

Even in 2023, jobs in retail, construction and government will all remain below 2019 levels, the report found.

Construction spending will see some benefit from government projects, including improvements at schools following damage from the 2018 Anchorage earthquake and federally funded projects to improve infrastructure.

Popp also said new oil discoveries on the North Slope promise hope for the future and new jobs as they are developed.

“We find ourselves in very difficult times, but they are not insurmountable,” he said.

“We can overcome this disaster and get back on the path to economic recovery,” he said. “But it will be a long journey. It has taken us years to get where we are today and it will take us years to get the Anchorage ... economy back to where we started.”