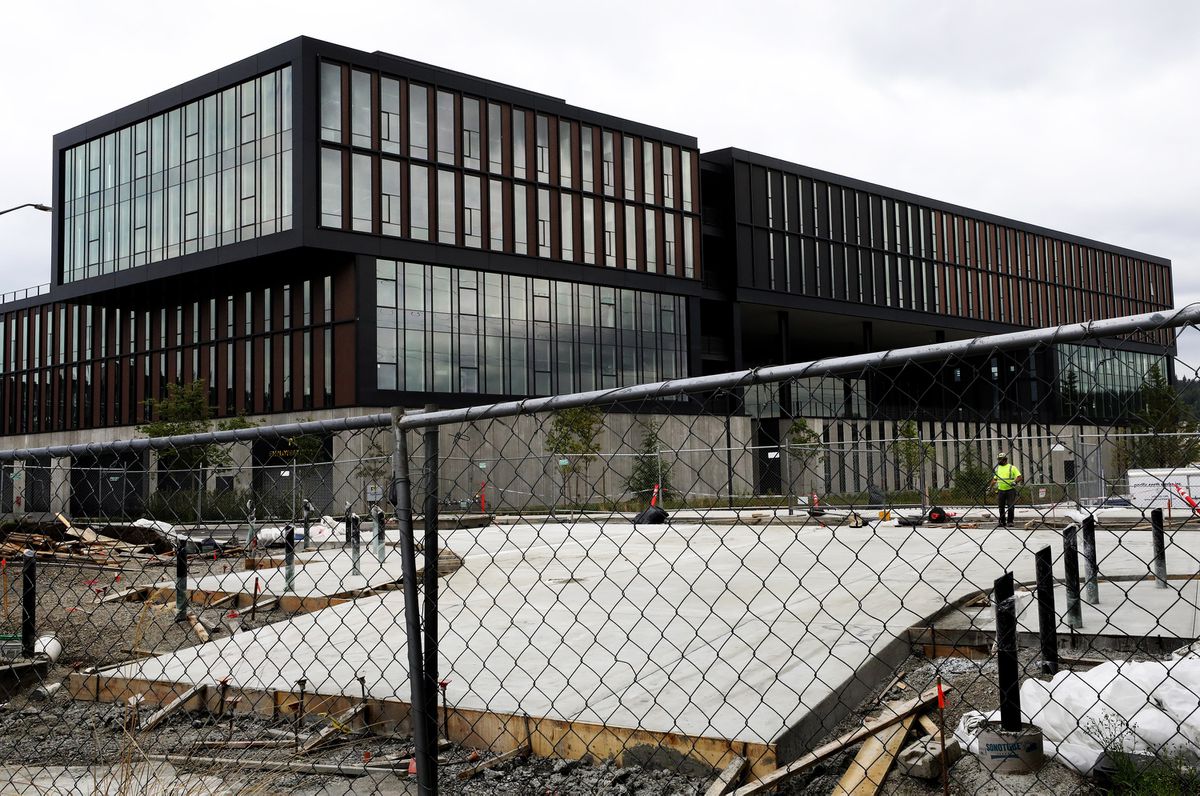 REI is selling its never-used headquarters in the Spring District of Bellevue, Washington. (Alan Berner/Seattle Times/TNS)

REI is selling its never-used headquarters in the Spring District of Bellevue, Washington. (Alan Berner/Seattle Times/TNS)

SEATTLE -- In yet another sign of COVID-19′s disruptive impact on business, REI is abandoning its nearly completed corporate campus in Bellevue and spreading headquarters operations to multiple sites across the Seattle area.

The Kent-based outdoor retailer said it is in talks with “multiple interested parties” to sell the never-used 400,000-square-foot building and 8-acre campus. People familiar with the situation say one of those parties is Facebook, which has facilities in the same upscale multiuse development, known as the Spring District, where the REI headquarters is being built.

REI’s move, announced Wednesday morning, is one more striking example of how the pandemic is forcing companies to reassess where their employees work and how much real estate they need.

“The dramatic events of 2020 have challenged us to reexamine and rethink every aspect of our business and many of the assumptions of the past,” Eric Artz, president and CEO, told employees in a Wednesday morning video call.

REI’s 1,200 headquarters employees have been working remotely since March 2 as the company has navigated the onset of the pandemic, the March 16 closure of its more than 160 retail sites and a dramatic decline in revenue.

When the company returns to offices — the date is unknown — it expects to operate in several sites, including an existing one in Georgetown, as well as new satellite campuses that REI is scouting for on the Eastside and in south Puget Sound.

The company doesn’t know how many employees will continue to work from home versus in company offices. “The goal is to create max flexibility so employees can interact with our physical office space in whatever way works best for them,” spokesperson Halley Knigge said.

REI is looking to sell its custom-made new headquarters and allow employees to work from home or other offices, the latest sign that the pandemic is driving companies to ditch central offices to raise cash https://t.co/fiFTdJOyAo

The decision to walk away from the Spring District campus, which the company had expected to move into this summer, marks a major strategic shift for the outdoor retailer.

When REI announced plans in 2016 for the new headquarters campus, the project was billed as a way to consolidate operations that are spread across four Seattle-area sites.

But the pandemic has pushed REI to rethink both where its employees work and how much capital it can afford to sink into a single asset, said Ben Steele, REI’s chief customer officer, who has led the headquarters design.

Steele said the success of REI’s work-from-home model during the pandemic demonstrated that the company could operate effectively without a central location. “We’ve seen and we’ve heard from our employees that they see a lot of benefits of working remotely,” Steele said.

That, in turn, allowed REI to consider less costly real estate options at a time when it faces continued economic uncertainty. In May, the company projected a 30% decline in revenue for the year due to the pandemic. Although stores began reopening in May and sales have outperformed that forecast, Steele says the company expects “to be down on an annual basis.”

The new headquarters model offers REI both “a way of working that our employees can benefit from and the ability to strategically move [to a] healthy cash position or balance sheet,” Steele said.

Although the company declined to say how much it has invested in the Bellevue project, “we anticipate that the potential sale of our property would bring a positive return on our four-year investment,” Knigge said.

REI also said the new model would help reduce the company’s carbon footprint while making it easier to recruit a more diverse workforce by giving employees more choice in where they live.

Whether REI’s decision is a harbinger of a broader corporate response to COVID-19 remains to be seen.

Many big companies with large office-based workforces, such as Amazon, Microsoft and Google, have extended their work-from-home policies without publicly suggesting permanent reductions to the size of their existing campuses.

To the contrary, as lockdown restrictions lift and workers trickle back to the office, the thinking goes, companies will “realize how much people collaborate and are more innovative when they’re back in the space together,” John Miller, senior managing director for CBRE Seattle, said in a recent interview.

Other Spring District tenants — including Facebook, which occupies close to 1 million square feet in the 36-acre development — have not said they intend to let their leases lapse.

And that other firms are said to be interested in the Spring District location shows that companies remain attracted to the central campus model — especially one like REI’s former future headquarters, with its open design, inviting courtyards and easy access to a new light-rail station slated to open in 2023.

Yet REI’s decision to sell its Bellevue campus shows how fast plans can change during a pandemic.

Even back in 2016, when REI unveiled plans for the Spring District campus, the company acknowledged the need to support “an increasingly mobile workforce” to cope with the region’s rising traffic congestion.

As a result, Steele said Wednesday, REI “started to accelerate our mobile working capabilities over the last couple of years.” Those moves, he said, “positioned us well for this moment.”

Steele said the campus decision says less about the Spring District location than about the company’s current circumstances. “The ability to … replenish that balance sheet and create the opportunity for investment, we think, is more beneficial to help REI move through COVID with strength [and] emerge with strength than [are] the benefits of the campus.”