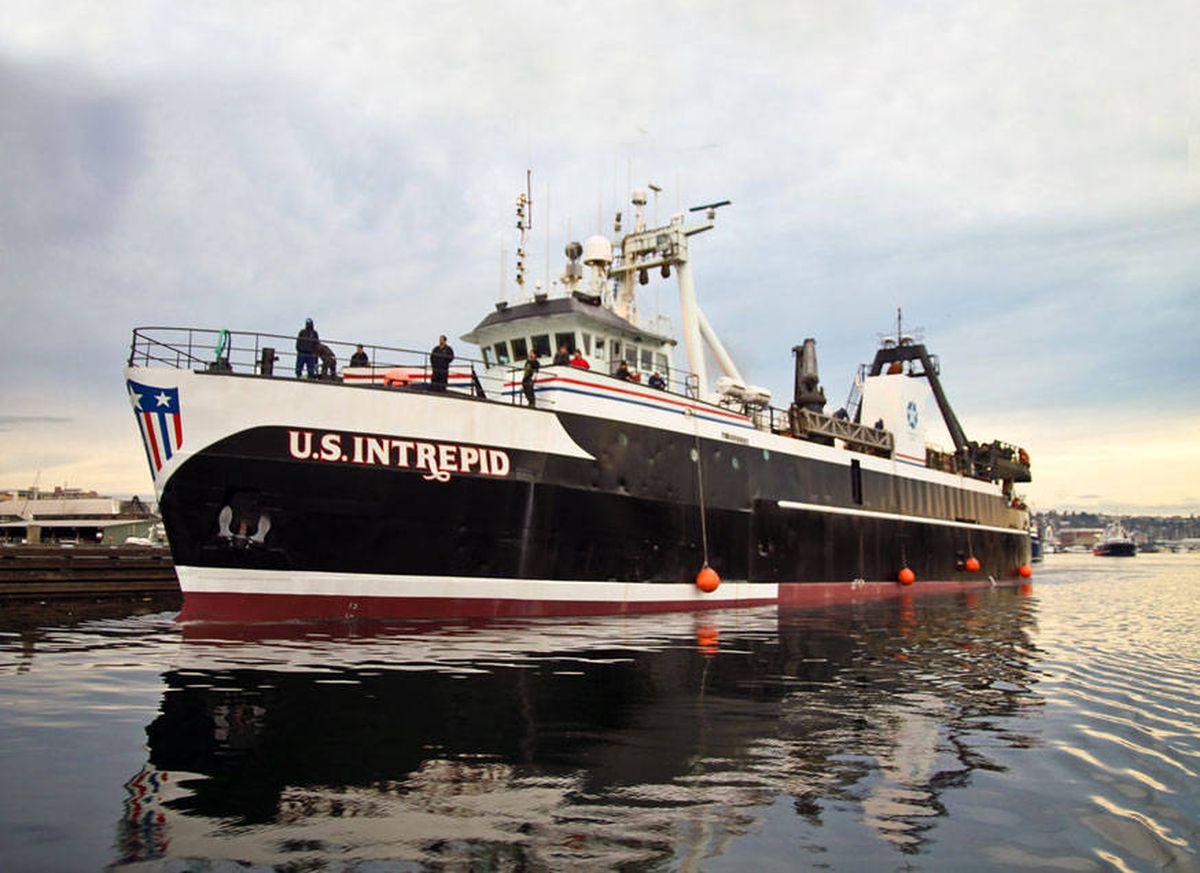 The catcher-processor U.S. Intrepid is one of three ships owned by Fishermen’s Finest Inc. The company is suing the State of Alaska in a dispute over the application of state landings taxes applied to fish caught in federal waters that transit state ports but are sold in foreign markets. (Photo courtesy Fishermen’s Finest)

The catcher-processor U.S. Intrepid is one of three ships owned by Fishermen’s Finest Inc. The company is suing the State of Alaska in a dispute over the application of state landings taxes applied to fish caught in federal waters that transit state ports but are sold in foreign markets. (Photo courtesy Fishermen’s Finest)

Millions of dollars of fish landing taxes are at stake in a lawsuit now being deliberated by the Alaska Supreme Court and the decision could hang on when the court decides processed fish are “in-transit.”

The court heard oral arguments Oct. 21 in a lawsuit brought against the State of Alaska by Seattle-based Fishermen’s Finest Inc. in which the company argues Alaska’s fishery resource landing tax violates a prohibition on taxes or fees levied against goods on the way to export in the U.S. Constitution.

Jim Torgerson, an attorney for Fishermen’s Finest, argued that the fish harvested and processed in federal waters by the company’s catcher-processor vessels have started their journey to foreign markets when it arrives at Alaska ports but before being shipped worldwide.

Torgerson stressed that the fish are caught and preserved in the federal Exclusive Economic Zone, or EEZ, that starts three miles offshore and therefore the fish products are in-transit when they cross the three-mile boundary and enter state waters from the EEZ or, at the latest, when they are transferred elsewhere at the port.

He said in response to questions from the justices about what constitutes a “significant movement” that crossing the three-mile boundary into state waters after all of the work on the actual fish has been completed is a key legal trigger.

“The last thing for (the company) to do was to transfer the fish to the foreign markets and that transport process started when the vessels left the EEZ and spent a day or two traveling to Alaska into the ports, trans-loaded into the foreign vessels or into the refrigerated containers, so it was that actual movement, that actual transportation, that was commencement of that in-transit process,” Torgerson told the court.

Fishermen’s Finest filed the lawsuit — technically an appeal of an administrative ruling in favor of the state — in May 2018.

Superior Court Judge Dani Crosby sided with Fishermen’s Finest in a November 2019 ruling in which she concluded it violates the import-export clause because the fish are “in continuous export transit” when the tax is applied.

The fishery resource landing tax generated nearly $12.5 million for the state and local governments in 2019, according to Tax Division records. It is levied based on 3 percent of the catch’s unprocessed value in established fisheries and 1 percent of the value in developing fisheries, as determined by the Alaska Department of Fish and Game.

Unprocessed fish is not subject to the resource landing tax but could fall under the broader fisheries business tax. Leaders of coastal communities across the state said the fish tax revenues, which the state shares with local governments, are crucial for developing and maintaining the shore-side infrastructure used by the industry in those communities when Gov. Mike Dunleavy in 2019 proposed the state keep the local share of fish tax revenue to help close the state’s longstanding budget deficits.

The Legislature ultimately rejected the governor’s plan for the state to retain all of the fish tax revenue.

While the fish taxes are generally split 50-50 between the state and the local governments in which they are collected, qualifying statutory language can lessen a local government’s share below 50 percent. As a result, the local share of the fishery landing tax has been in the $5 million range shared by between eight and 14 mostly Western Alaska communities in recent years, according to Tax Division records.

Assistant Attorney General Laura Fox countered that the fishery resource landing tax, which targets catcher-processors, is not the kind of levy the constitutional framers envisioned because it doesn’t burden other states or harm any federal interests.

“Catcher-processor operators take advantage of Alaska to further their business and Alaska’s landing tax merely requires them to pay their fair share for doing business in Alaska like other businesses do,” Fox told the justices in her opening remarks.

She said the tax is applied when the processed fish lands at an Alaska dock and could still be sold domestically, while the export process starts when the fish “actually leaves Alaska.”

According to Fox, applying legal tests to parse out exactly when the processed fish is “in-transit” in attempting to determine the constitutionality of the tax would simply lead to fishing companies altering their business models or the state restructuring how it is applied to “get around the technical line-drawing that’s trying to be done.”

Torgerson acknowledged in response to questioning that the tax would not violate the import-export clause if the fish products stayed stateside, but emphasized the products in question in the case were sold in foreign markets.