Does wearing a mask help the economy? An Alaska economist weighs in on incentives to slow virus spread and avoid a lockdown 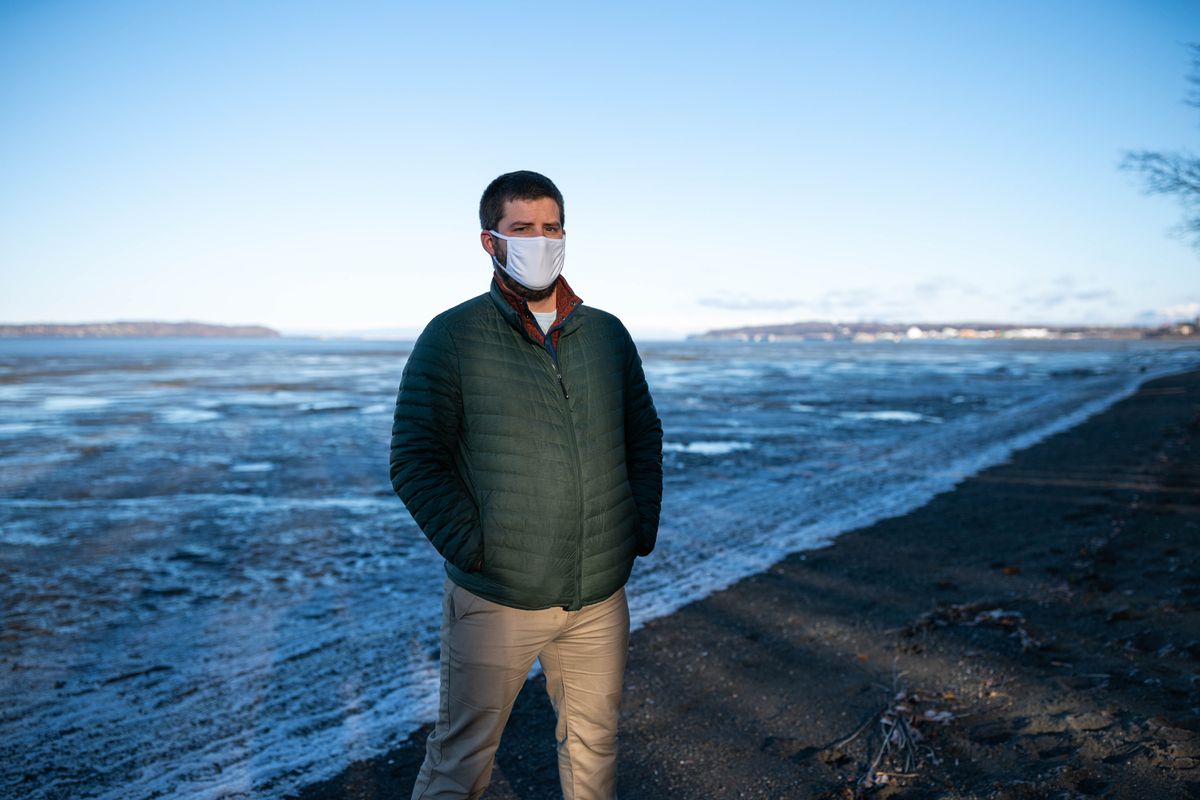 Kevin Berry is an assistant professor at the University of Alaska Anchorage, where he researches how people respond to risks like wildfires, climate change and pandemics — he even wrote his dissertation on pandemic prevention. These days, he also teaches a course on pandemic economics at UAA, and he recently participated in a briefing where Anchorage leaders, hospital officials and business representatives urged the public to dial up efforts to curb the spread of COVID-19 and help keep businesses open.

Berry agreed to speak with the Daily News about the pandemic’s impact on the economy. This interview has been condensed and edited for length and clarity.

ADN: In a recent city briefing, you pointed to evidence showing that voluntary actions and people being afraid to go out safely hurt the economy more than government-mandated shutdowns nationwide. Can you explain that a bit more?

Berry: The two studies that I pointed to are both in the National Bureau of Economic Research working paper series. ... The authors basically go through and track how much time people are spending away from their homes at different business locations (using cellphone tracking data). ... They found that, in both studies, the amount of time that people were spending at home actually predated shelter-in-place or hunker-down orders. ...

They can see things like, a community that didn’t have a shelter-in-place order might have seen a reduction in mobility at the same time as another community that did. And so this is where we can get the evidence for statements like, people are sheltering in place because they’re concerned about case counts, because they simultaneously looked at — in addition to the shelter-in-place orders — the impact of case counts in a location as well. ...

People know that it’s risky to go outside right now, to go to restaurants or bars or get your hair cut or go to the grocery store. And so they’re going to do things to protect themselves. Because people don’t like being sick. I mean, they don’t want to get potentially seriously ill and face long-term consequences or die, but they also don’t want to get sick at all. And so everybody is taking more precautions, and one of those is not going out to businesses.

ADN: Can you draw a line between those studies and, if there’s evidence, whether that same phenomenon took place here in Anchorage or statewide?

Berry: Even within Alaska, not every community has a mandate. Not every community has a mask mandate or a shelter-in-place order in place, but people are still cautious. So if we look at just the foot traffic data for Anchorage, for instance, consumer spending is down. Foot traffic to various businesses has been down, but it didn’t immediately recover after the mandates were lifted.

If you look at consumer spending in Anchorage, there’s a steep drop right at the beginning of the pandemic, and you can argue that maybe a lot of things are happening simultaneously: the shelter-in-place orders, as well as the increase in case counts. Because in Alaska, they happened at very similar times here. The first cases ever to show up, we basically immediately shut down. Schools closed, and then businesses were shut down too.

What seems to be happening: It’s just that it’s continually depressed, and the only constant factor is that COVID-19 is still here, and people are still trying to protect themselves. ... It shows up in the Alaska data pretty clearly that there’s been this consistent depression in consumer spending because of this risk, and it also shows up by sector where the biggest impacts are in entertainment, restaurants and hotels, the sort of stuff that we all know as high-risk activities.

ADN: You said that “the data points to this not being a story of government causing our recession, but instead, this is driven by the pandemic itself.” How do we fix it? And are we powerless in that regard?

Berry: It’s brutally simple. The economy can’t return completely to normal as long as the pandemic is still going on. So until we have a vaccine and a bunch of effective treatments that makes it basically riskless or very low risk — until we reach herd immunity, which comes with a body count, comes with a lot more people dying, or until we eradicate the disease through sort of brutal shutdowns and lockdown and rules, the economy is going to be slower. It’s sort of an unavoidable fact. It’s frustrating. Nobody likes it. Nobody’s happy. ... It’s the disease driving all this.

We can have support payments, we can have bailouts, we can have the CARES Act that can keep people in their homes, paying their mortgage, paying their rent, able to buy food that keeps the businesses in business, because they’re otherwise completely viable and profitable businesses. ... But we can’t return things to normal because even if you opened everything up, people would not return to their normal behavior.

ADN: Are there economic incentives for something like a statewide mask mandate?

So, anything that slows the spread of COVID is good for the economy. The governor is correct, that it’s sort of unavoidable that there’s going to be more cases. It is just the nature of a very infectious disease, that it’s going to infect a lot of people. But there are ways — again, the governor is correct — for Alaskans to slow the spread of the disease. And that involves wearing masks and washing hands.

I think it’s more complicated than maybe both sides are pointing out. If I’m being super optimistic, the issue with the mandate is people have to follow it. ... I think up to this point, we’ve been trying to convince people in parts of the state that are not wearing masks to do things because it’s the right thing. And it’s not clear that there’s been enough mask wearing and caution as a result of those nudges. So a mask mandate could improve cooperation. ...

It makes economic sense to have a mask mandate if it encourages people to wear them. A mask mandate that people don’t follow isn’t necessarily helpful. What we need right now is something that convinces the people who refuse to wear a mask to do it, whether it’s (legally required), or if it’s an ad campaign.

ADN: Could you talk about the negative consequences of a lockdown and how you think a lockdown or shutdown — you refer to it as a “blunt instrument” — could be avoided right now in Anchorage or in Alaska? What it would take to avoid that?

Berry: I think one of the difficult things to wrap one’s mind around is that there’s multiple options for what’s going on today. The most straightforward is to do nothing, to have no restrictions on the economy, and then leave people to sort of avoid getting sick on their own. So — uncoordinated action where everybody tries to do their best for themselves. And that’s going to lead to the most fatalities and a lot of economic harm along the way. ...

There’s this lockdown alternative, where we shut down the economy for two to four weeks, drive down the prevalence of the disease and then lift the lockdown and let things go back to the status quo for a little bit. And then eventually have to lock down a second time and a third time. And so that’s the blunt instrument, because it basically closes everything down. That’s the most harmful good policy. It’s not the one you want to choose, because it’s ... overly restrictive.

The best policy is the masking, hand washing, restrictions on risky activities, like restaurants and bars. It’s the difference between a scalpel and a chain saw. And in that case, you can allow more economic activity — overall, fewer restrictions on people’s movement — but you still get most of the disease reduction. ...

We know lockdowns are damaging. They reduce vocational attainment if you close schools. You potentially keep people at home that you need to be at work because they have to watch their children and take care of them. ... We know that there’s issues with mental health, that people are tired of being locked in their homes, or stuck at home, because there’s nowhere to go. We know that domestic violence has increased as a result of lockdowns and shutdowns. And so if we use the blunt instrument, there are all these additional costs that we face. ...

If we can do a mask mandate, then we don’t need a limitation on those activities. It’s trying to avoid those additional costs from the shock of a shutdown.

ADN: What else do you think is important?

Berry: We need another CARES Act. The stuff that I basically just asked for requires a lot of sacrifices. And those sacrifices are not equally distributed across society. COVID unequally impacts vulnerable at-risk populations and unequally impacts people who are typically lower income and more vulnerable, at least the economic side of these mandates. You shut down a restaurant, you’re costing servers their income. ... We are asking a lot from those people to take a hit to protect the rest of us. And they need support.

ADN: What do you wish people understood about the pandemic economy?

Berry: The thing that scares me is that the underlying things that cause COVID to emerge — to jump from animals to people and infect some people and spread throughout China and then spread over across the planet — none of that’s changed. The odds of another pandemic emerging are exactly the same today as they were the day that COVID happened. This is not the last pandemic.

There’s more of these coming. And our ability to work as a society, as a country, is going to determine basically how rough the next 20, 50, 100 years are going to be. If we can solve the underlying drivers — which is stuff like the wildlife trade, environmental degradation, rapid urbanization and unsustainable economic growth — we can help prevent a lot of these outbreaks. If we can do things like invest in prevention, invest in science, we can make the world a better place.