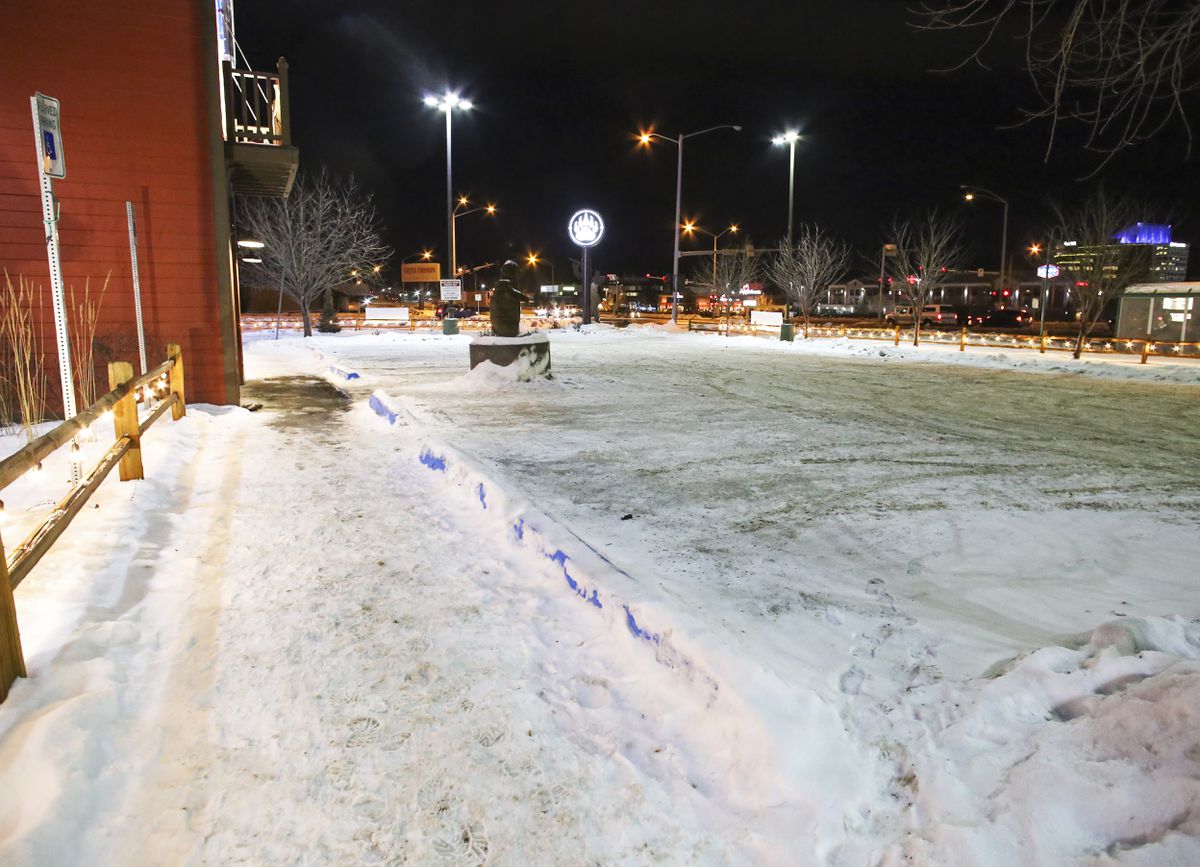 An empty parking lot at The Bear Paw Bar and Grill in Anchorage. Anchorage in December returned to a modified 'hunker down,' which, among other things, halted indoor service at bars and restaurants. (Emily Mesner / ADN)

An empty parking lot at The Bear Paw Bar and Grill in Anchorage. Anchorage in December returned to a modified 'hunker down,' which, among other things, halted indoor service at bars and restaurants. (Emily Mesner / ADN)

The new $900 billion COVID-19 stimulus bill will provide some of its most critical help in Alaska to the growing number of people who have collected unemployment checks for months, many of whom are behind on rent, credit card payments and other bills.

The bill’s $600 stimulus check is less than the $2,000 checks that President Donald Trump and some other leaders in Washington are seeking, though local economists say even that amount of money, in addition to an extra $300 weekly boost to unemployment checks, will help.

Pandemic relief aid will be a “lifeline” for many Alaska households, said Mouhcine Guettabi, an economist with the Institute of Social and Economic Research at the University of Alaska Anchorage.

“It will make a world of good for people,” said Guettabi. “There’s no doubt we were on the verge of reaching a potential cliff of very significant benefits expiring.”

The bill was signed by the president on Sunday after five days of delay, following his objection that the stimulus checks were too small, among other criticisms. It extends COVID-19 relief programs approved in the $2 trillion CARES Act in March.

Some 40,000 Alaskans have collected unemployment benefits in recent months after the economy crashed in March. With federal support dwindling this fall, they’ve seen their unemployment checks drop to an average of about $250 weekly — not enough to cover typical rents in most of the state. The extra $300 will be added to the $250 average, providing a sizable jump in income.

The stimulus checks should arrive in days to begin helping those Alaskans and others, Guettabi said. They are expected to hit accounts and mailboxes similar to how the first round of checks arrived in spring.

Trump’s delay in the bill’s signing could lead to at least a few days’ lapse in the issuing of the extra unemployment aid, Guettabi said.

“We anticipate receiving the guidance documents from (the Labor Department) by the end of the week and will have a better idea then” of implementation dates, she said in an email on Monday.

The benefits the new bill extends to struggling Alaska individuals and families include:

• An extension of two federal jobless aid programs, including the Pandemic Unemployment Assistance program. That program has provided checks to self-employed Alaskans who are out of work, such as Uber drivers or private contractors. More than 11,000 people received the PUA benefit in mid-December. The extension will carry the PUA payments into March.

• Alaska will receive a chunk of the $25 billion set aside for rental assistance, helping people avoid evictions. The bill also extends a moratorium on evictions through Jan. 31.

• Monthly food stamp benefits under the Supplemental Nutrition Assistance Program, or SNAP, will rise by 15% for six months through June.

Alaska Republican Sen. Lisa Murkowski in an interview last week said it’s important to recognize that the overall array of aid — including rental assistance, help with loans and unemployment assistance — will support people in many ways.

It’s “really, really quite significant,” she said of the entire aid package, which also includes the renewal of the Paycheck Protection Program that buoyed many Alaska businesses.

Alaska Republican Sen. Dan Sullivan said in a statement that the package “is not a perfect bill.”

But, he added, “it does the job of extending immediate help to Alaskans struggling to make ends meet, until our economy is recovered and the pandemic is behind us.”

Rep. Don Young, R-Alaska, said last week that he hopes the aid bill takes Alaskans “into a new year full of opportunity, growth, and the end of this pandemic.”

On Monday, Young did not vote on a measure that passed the Democratic-controlled House to increase the stimulus payment to $2,000, a bid expected to face an uncertain future in the Republican-led Senate.

Young’s office said in a statement Monday that he appreciates Trump’s desire to increase aid, but could not support “political theater” by the Democratic leadership to boost the payment, without committee input.

“The House operates at its best under regular order; if Speaker (Nancy Pelosi) wanted true, collaborative policymaking to result in more help for Americans who have lost income from the Covid-19 pandemic, she wouldn’t have held the vote without the customary debate afforded to most pieces of legislation,” the statement said.

Alan Budahl, executive director of Lutheran Social Services of Alaska, said the additional rental assistance in the stimulus that passed will help many people.

“We have gotten hundreds of phone calls today (for rental assistance),” he said Monday afternoon. “The need is great.”

It’s uncertain how much the new bill will help the state’s economy, Guettabi said.

So many people need to cover backed-up rents, mortgages, credit card payments and other bills that they may not have much left over for shopping and dining, he said.

“I don’t think we should expect it to provide a significant boost at the aggregate level,” Guettabi said. “But at the individual household level, it’s much-needed.”

The aid should reach people more quickly than the rollout associated with the CARES Act, which required the creation of new programs, said Jon Bittner with the Alaska Small Business Development Center.

The money will help Alaskans bridge what could have been the worst economic period of the pandemic, he said.

“It’s a compromise bill, so no one got exactly what they wanted,” he said. “But it’s enough to last a few months.”

It will hopefully help Alaska reach the “light at the end of the tunnel” created by newly released vaccines, which could end the pandemic and support economic recovery, he said.