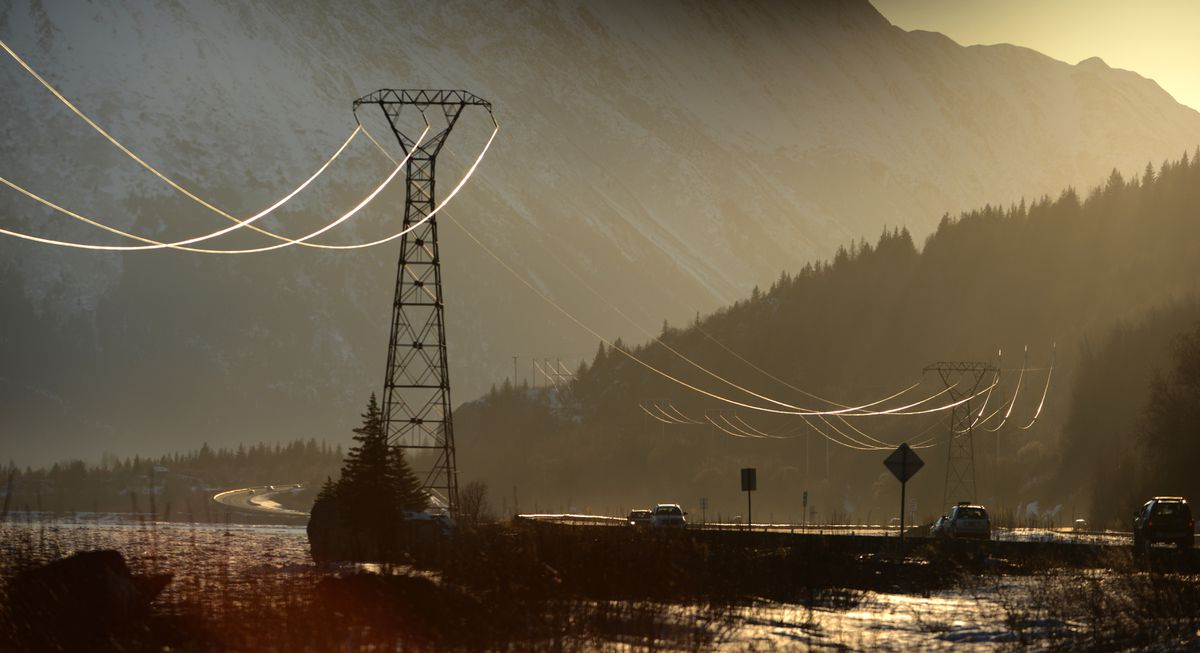 Power lines are highlighted by the setting sun along Turnagain Arm and the Seward Highway south of Anchorage, Alaska on Sunday, March 26, 2017. (Bob Hallinen photo)

Power lines are highlighted by the setting sun along Turnagain Arm and the Seward Highway south of Anchorage, Alaska on Sunday, March 26, 2017. (Bob Hallinen photo)

A request by Alaska Railbelt electric utility leaders to double the time to implement major grid reform legislation has been met with disdain from some key regulators and stakeholders.

The general managers and CEOs of the Chugach, Golden Valley, Homer and Matanuska electric associations along with Seward’s utility director wrote to the Regulatory Commission of Alaska in a March 29 letter to ask lawmakers for another year to hash out the regulations needed to stand up a new grid planning organization they’ve dubbed the Railbelt Reliability Council, or RRC.

The establishment of such an organization to improve electric generation and transmission coordination amongst the state’s largest power utilities is at the heart of Senate Bill 123 passed last year, which mandated the utilities to work with the RCA on the decades-old issue.

Utility leaders noted in a series of subsequent public RCA hearings that most similar legislation comes with a two-year window to complete the accompanying regulations, while lawmakers specifically put a one-year timeline for the complex and often highly technical regulations underpinning SB 123.

An audibly frustrated RCA Chairman Bob Pickett responded to the utility’s concerns during an April 7 teleconference that the July 1 deadline for the final RRC regulations has been known since the start of the process. Pickett further said asking the Legislature for such an obscure statutory change at this point in the session is a long shot at best.

He also questioned whether the RCA, a sub-agency of the Commerce Department, can make an official request to lawmakers independent of the governor’s office.

“At the tail end (of the legislative session) the only way something like this would happen is some kind of lobbyist-driven amendment by the utilities,” Pickett said.

Chugach CEO Lee Thibert said the utilities are not trying to stop the process and all backed SB 123 but the regulatory development has taken much longer than expected.

“We can’t let this get rushed through and have problems for the next umpteen years. We need to take the time and get it right the first time,” Thibert said.”

Matanuska Electric CEO Tony Izzo later told Pickett the utilities would not seek the extension without the commission’s backing, though RCA member Dan Sullivan said he thought the request could be fulfilled if enough weight was behind it.

The utilities also contend that early drafts of the regulations maintain too much control over the RRC with the commission and are not in line with the more collaborative intent of SB 123.

Rose testified that he and other nonutility committee members have donated countless hours of their time over the past nine months to ultimately improve the region’s electric infrastructure and save ratepayers money.

“It was, and still is, stunning to me that the same utilities who like to say that they are working collaboratively with the others on the RRC would submit a letter to you asking to prolong an already too long process for another year without discussing the letter or its implications with the other RRC members,” Rose said.

Other RRC committee members said they also believe the utilities want to retain control of the grid and are searching for an opportunity to do so.

“Everyone wants to get this right but when you’re trying to do things that are complicated and transformational you’re not going to be perfect, so you just have to do your best and keep improving along the way,” Settle said in an interview.

CIRI owns the Fire Island wind project and had plans to expand the project scuttled in 2017 when agreements for tariff rates to transmit the company’s power to Fairbanks couldn’t be reached.

It’s those kind of stable-cost deals for renewable power that the RRC should help facilitate, she said.

“Regional planning in the long run will reduce electric costs for the bulk of Alaskans, Settle said. “I think it’s 20 years overdue.”