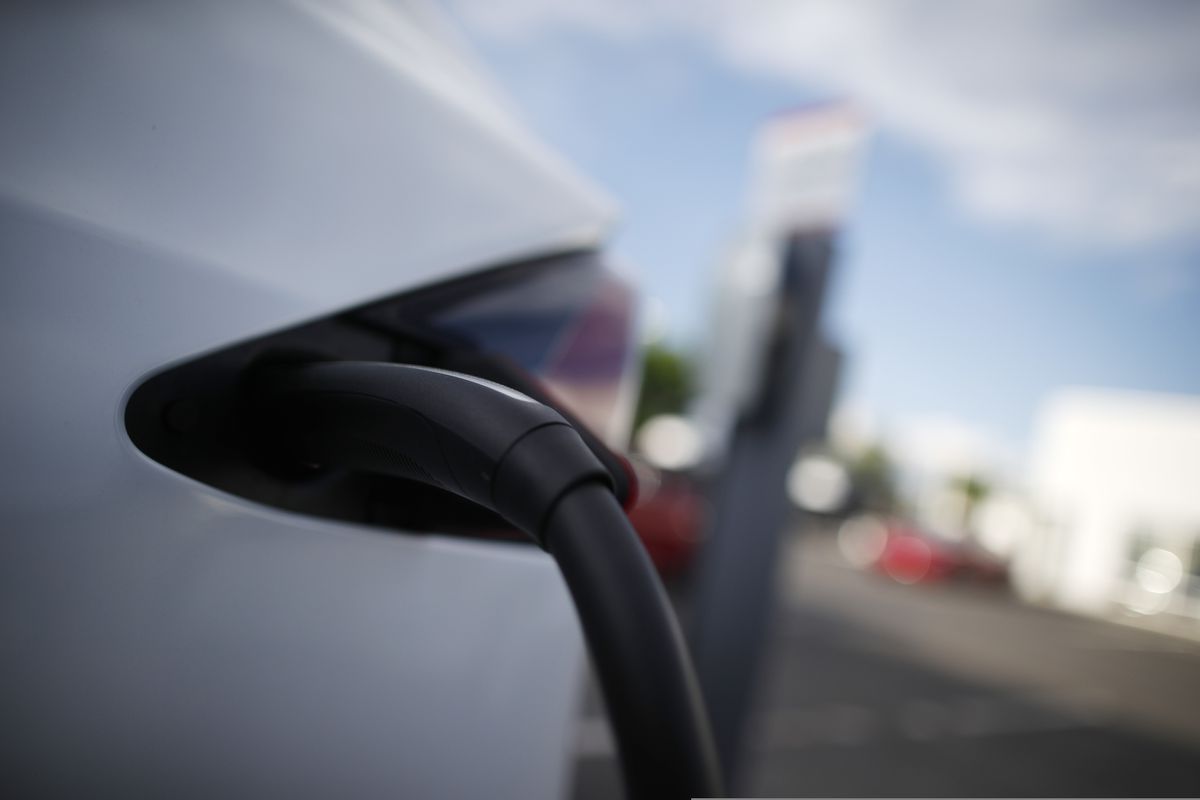 A Tesla car is plugged into a charging station at a dealership in Littleton, Colo. (AP Photo/David Zalubowski, File)

A Tesla car is plugged into a charging station at a dealership in Littleton, Colo. (AP Photo/David Zalubowski, File)

This article originally appeared at KDLL and Alaska Public Media and is republished here with permission.

KENAI — There could be a chain of electric vehicle chargers along Alaska Railbelt highways by 2022.

The Alaska Energy Authority is building out its plan to make 600 miles of highway from Homer and Seward to Fairbanks friendlier to electric vehicles.

But advocates say the state needs to change regulations before that plan is feasible. Earlier this month, a coalition of Railbelt utilities proposed some of those changes to the Regulatory Commission of Alaska, the body that manages public utilities in the state.

The Alaska Energy Authority wants to line the Railbelt with fast chargers — which can charge some cars in less than an hour.

The problem is, those faster chargers consume large amounts of electricity for short, intermittent bursts of time. That means a business hosting a charging station may have to pay a high-demand charge.

And the businesses might not bring in many sales to balance those costs, at least in the beginning. Michelle Wilber with the Alaska Center for Energy and Power is part of the Alaska Electric Vehicle Working Group.

“Any public charging station isn’t going to be used very often right now, and it’s sort of a chicken or the egg problem,” she said. “Without the publicly available charging, then less people buy vehicles because they’re worried about running out of range to do a long drive or get to work or do a road trip.”

That’s going to be expensive for the businesses operating those stations. The Alaska Energy Authority is paying some station installation and maintenance costs with money from a 2017 Volkswagen settlement. But businesses have to pay for their own electricity.

“That’s not really tenable as far as someone owning the station and paying for those electricity costs,” Wilber said.

The Alaska Energy Authority has already received a lot of interest from potential site hosts along the Railbelt. Wilber thinks that’s because they anticipate these regulations will change.

The utilities proposed a new rate design that would remove that high-demand charge, at least for the first few years of operation. Each utility will have a little bit of wiggle room to determine its own rate and will approve that rate with the regulatory commission separately.

Wilber said she doesn’t think utility members will see much change in their rates. She said the idea is that ratepayers would eventually pay less as utilities sell more electricity to charger site hosts.

The other change the utilities are proposing is to explicitly allow site hosts to charge drivers for electricity.

Currently, public utilities are the only entities allowed to sell electricity to several customers. The workaround from charging site hosts has been to charge by the amount of time.

“For instance, there’s a level two charging station here at the Rustic Goat in Anchorage, and I believe they charge $1.75 and hour, or any portion of an hour,” Wilber said.

But, she said, different vehicles charge at different rates. And charging is slower as the vehicle gets charged up.

The utilities want to clarify that charging site hosts don’t have to be public utilities themselves to sell electricity. That way, they can charge electric vehicle drivers for the electricity directly.

The Regulatory Commission of Alaska has received the docket of proposed changes and is now accepting public comment.