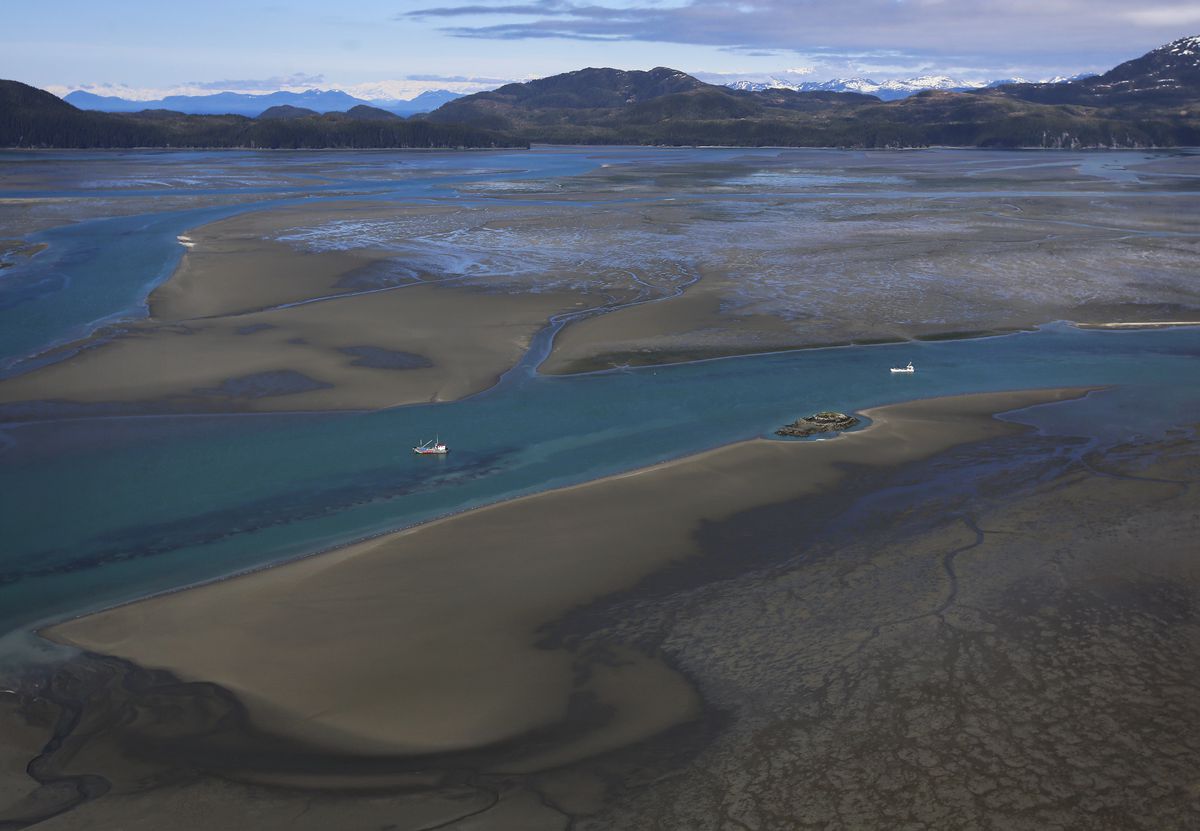 Fishing tenders anchor along the Copper River flats during the first commercial salmon opener in Cordova on Monday, May 17, 2021. (Emily Mesner / ADN)

Fishing tenders anchor along the Copper River flats during the first commercial salmon opener in Cordova on Monday, May 17, 2021. (Emily Mesner / ADN)

Copper River salmon fishermen got their nets back in the water for the first time in weeks on June 9, aiming for some of the sockeye headed upriver.

The sockeye had been sparse at the Alaska Department of Fish and Game’s sonar at Miles Lake, but the count increased enough through June 8 to allow a 12-hour commercial drift gillnet opener. As of June 8, 187,268 sockeye had passed the sonar, on track to meet the in-river run goal, according to ADFG’s announcement.

That figure continued to swing upward over the weekend; by Saturday, 289,784 sockeye had been counted, significantly ahead of last year’s count and on track to reach the in-river escapement goal. The Chitina personal-use dipnet fishery also opened June 10 for a 96-hour period.

A June 12 release from ADFG announced a 12-hour opener for June 14, not including the expanded chinook salmon inside closure area.

“Increasing daily passage at the Miles Lake sonar station indicates that the inriver goal is likely to be met and supports opening the Copper River District commercial fishery,” ADFG noted in its June 12 announcement.

The ADFG sonar went into the lake on the south shore of Miles Lake, which based on historical counts means half the sockeye passing through have been counted. The flows in the Copper have been extremely low and cold so far, in line with the late and cold spring, which may be affecting the fish moving upstream as well.

Downriver, the Prince William Sound Science Center runs a sonar site near Clear Martin River confluence with the Copper. The fishery depends on the counts of sockeye entering the river, but because of hydrology of the system, ADFG’s sonar is at the outlet of Miles Lake — nearly two miles upriver from the mouth. To help ADFG gather management data for the commercial fishery, the Copper River/Prince William Sound Marketing Association fund the PWSSC’s sonar.

However, this year, their sonar didn’t gather much useful data. Rob Campbell, who manages the project for the PWSSC, said the flow of the river has changed to more of the water flowing down the western side. The sonar site is on the eastern.

“We’re not seeing very many fish,” he said. “I don’t think that’s the fish’s fault. It is just really, really changeable down there.”

It’s not entirely clear whether it’s just siting or whether sockeye behavior is a little different this year, particularly with cold water. In 2019, the soaring temperatures in the Sound placed heat stress on salmon, causing die-offs, but the Copper River was deep and cold enough that it wasn’t as affected as the shallower clear-water streams elsewhere in the area.

The project may have to relocate in the future to provide more useful data, he said, but that’s something the PWSSC and the funding group will have to talk about. Early in the season, which is when the lower-river data is the most useful, Copper River sockeye salmon command high prices. That’s when an opening — or closing — means the most to the fishermen economically.

“If that stimulated one extra opener, that could be like a million bucks into the fishery,” Campbell said. “Up until last year we lined up fairly well with the state sonar.”

Copper River sockeye prices have been reportedly sky-high this season. Copper River Seafoods has two-pound packages of king salmon for about $144 and five-pound packages of sockeye for sale for about $250; Peter Pan Seafoods announced following the second drift gillnet opener of the year that the company would be paying $19.60 per pound for kings and $12.60 per pound for sockeye; those prices that are several fold greater than historical averages.

Dan Lesh, a seafood industry analyst with McKinley Research — formerly the McDowell Group — said demand is expected to be strong and inventories are low, so prices are expected to be higher this season, despite the dearth in actual fish on the docks so far.

“The general story is that most participants in the salmon industry are feeling optimistic about this year,” he said. “The harvest volumes in general are below long-term averages, but they’re still expecting prices to be strong.”

[Photos: Opening weekend on the Russian and Kenai rivers for early run sockeye]

Despite the economic damage from the pandemic in many parts of the U.S. economy, demand for frozen seafood in grocery stores and other retail locations reportedly increased. Copper River salmon, and Alaska wild salmon in general, is typically considered a premium product and thus commands a premium price, available to those with more income.

People were not spending as much on travel or food service, and there was plenty of income still accumulating, Lesh said.

“One of the things we need to understand with the pandemic is that we actually had unprecedented high personal incomes last year,” Lesh said. “People are making money and they’re not spending it as much.”

However, Copper River prices don’t always translate elsewhere in the Alaska salmon market. Lesh said it can’t be assumed that the price will stay similarly higher than usual in other fisheries as more wild sockeye hits the market.

Harvest numbers in Copper River are overall still low; as of June 12, 90,580 sockeye had been harvested. Bristol Bay will come online in the next few weeks, with forecasted harvest of about 37 million sockeye, which is about 13 percent greater than the average harvest in the last decade. Upper Cook Inlet is gearing up to begin its sockeye harvest as well, though sonar counts do not begin on the Kasilof River until June 15.