Curious Alaska: Why don’t we have a Trader Joe’s (or Ikea, or Whole Foods)? 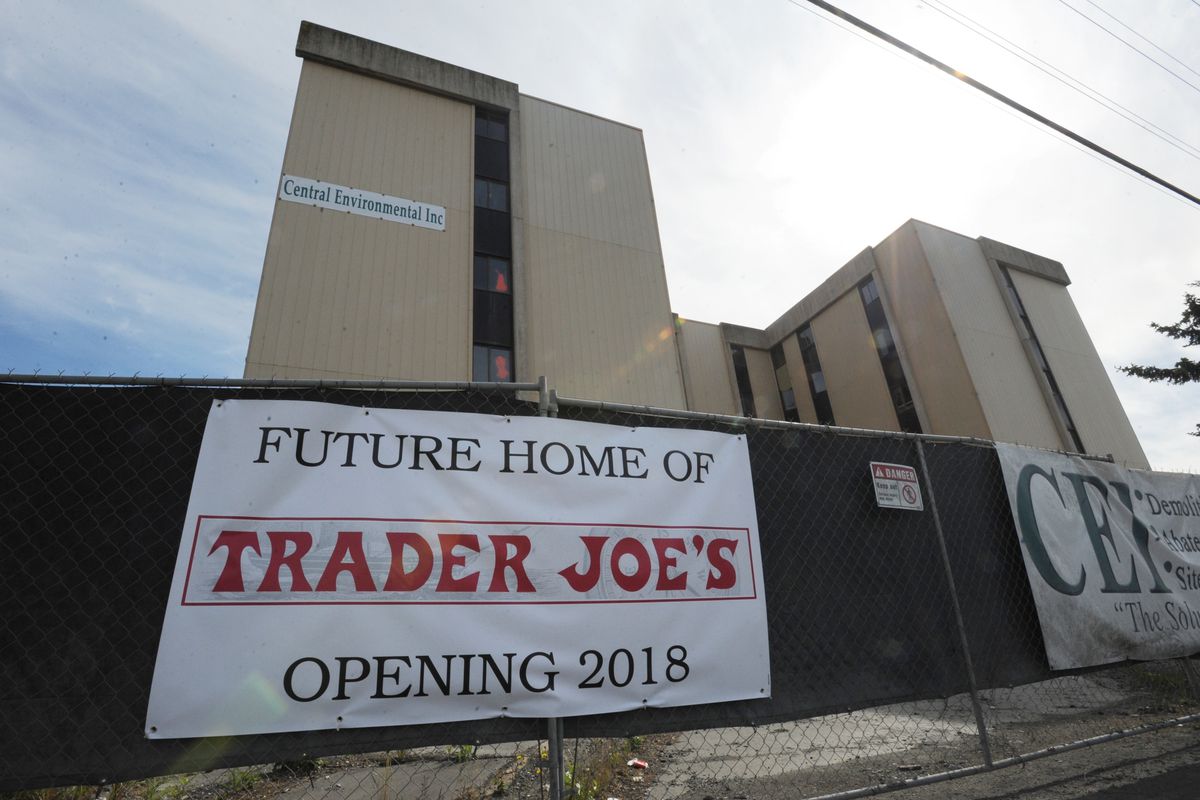 A fake sign proclaiming the opening of a future Trader Joe's location was visible to motorists traveling on Northern Lights Boulevard past the demolition site of the Northern Lights Inn on June 25, 2017. (Bill Roth / ADN archive)

A fake sign proclaiming the opening of a future Trader Joe's location was visible to motorists traveling on Northern Lights Boulevard past the demolition site of the Northern Lights Inn on June 25, 2017. (Bill Roth / ADN archive)

Question: What would it take to get a Trader Joe’s in Anchorage? Is there a reason Anchorage’s demographics don’t fit its business model? Seems like that store would be pretty popular here.

Trader Joe’s is one of several popular retail and grocery chains that haven’t made it to the 49th state; others we are asked about occasionally include Ikea and Whole Foods.

When contacted directly, the companies didn’t offer much about why they don’t have a presence in Alaska. But some clues are out there.

It’s not uncommon for an incoming visitor from the Lower 48 to squirrel away in their luggage a few packaged goods for Alaskans who are jonesing for, say, a jar of Cookie Butter or a shaker of Everything But the Bagel seasoning. Trader Joe’s has built its identity and a loyal following around its low price points, niche flavor offerings and laid-back vibe.

One person who always brings an extra bag full of coveted Trader Joe’s items on trips home to Alaska is Kirk DesErmia, who started a Bring Trader Joe’s to Alaska page on Facebook that’s liked by nearly 2,300 people.

The 49-year-old father of two lives in Seward but grew up around Trader Joe’s stores in Southern California.

He thinks Anchorage is an ideal location for the chain. He suspects it’d be so popular, a store here would almost have to be “Costco-sized,” or there would need to be several locations in Anchorage.

“If it landed here, I mean, they better make it twice as big as their normal model because it would be jam-packed full and impossible to get into with long lines,” he said.

[Curious Alaska: Are there snakes in Alaska?]

A few years after he started the Facebook page in 2012, DesErmia was interviewed on an episode of the podcast Freakonomics.

That was around the time he finally heard back from the folks at Trader Joe’s. They emailed about the possibility of a store in Anchorage, DesErmia said. The company comes up with a yearly plan for expansion, and with so many opportunities in the Lower 48, the added logistical challenges of bringing goods to Alaska meant Anchorage wouldn’t make it on the list, according to DesErmia.

“It didn’t leave me very optimistic,” he said.

His Facebook page lobbying for a Trader Joe’s in Alaska remains active, and he often post photos of his Trader Joe’s hauls from recent trips Outside.

New #traderjoes store in Marina Del Rey. Seems like it wouldn't be that hard to put a new store in Anchorage, Alaska....hint hint...

Posted by Bring Trader Joe's to Alaska on Thursday, June 3, 2021

Trader Joe’s, which is based in California and owned by a German family that also has a connection to Aldi bargain grocery stores, didn’t have officials available for comment to Curious Alaska. However, a representative noted in an email that the grocery chain’s podcast — Inside Trader Joe’s — briefly touched on the subject in 2018.

“Opening stores outside the 48 states requires us to solve unique logistical and operational problems and we would only open stores where we are able to bring real value to our customers,” Trader Joe’s CEO Dan Bane said in the podcast episode.

When it comes to Whole Foods, some locals may still be a bit sensitive from a debacle in 2017, when a sign hanging from a fence on a Third Avenue property proclaimed that the health food giant would be opening a location at that site. It was a hoax. A similar sign claiming that Trader Joe’s would open a location at the now-demolished Northern Lights Inn in Midtown also popped up in 2017.

Representatives from Whole Foods, which is owned by Amazon, didn’t respond to requests for comment on this story. Back in 2017, in response to the fake sign, a company representative said that they had no imminent plans for an Anchorage location.

But Dave Bronson, Anchorage’s new mayor, did tell the Daily News during his mayoral campaign this spring that he envisioned perhaps a Whole Foods within walking distance of a high-rise apartment building downtown.

On its website, Whole Foods lists factors it considers before opening a new location, such as whether there are at least 200,000 people within a 20-minute drive and whether there’s a high number of college-educated residents.

Less information is available about Ikea, whose relatively affordable Swedish furniture designs (and meatballs) have attracted their own fan base across the country. A representative from the furniture store’s United States branch wrote in an email that while Ikea is trying to expand its brand in the U.S., it has no plans for an Alaska store, saying that “there is an extensive process to see whether a market can support an IKEA store, and where a market stands with respect to other metropolitan areas.”

Companies planning new locations have formulas that generally include a certain amount of square footage, proximity to population, space for parking, the location’s income strata and an ability for their products to arrive in a timely way, said Mark Begich. Currently the president of the business consulting firm Northern Compass Group, he is also a former U.S. senator for Alaska and former Anchorage mayor.

“Sometimes, Alaska doesn’t always fit into the formula,” Begich said. And that’s unfortunate for some Alaskans, who have a history of getting seriously excited when national chains arrive.

Still, Begich is big on pitching Alaska and Anchorage to companies: While the city may not fit a traditional formula, it can still meet or exceed certain criteria, he said. Begich noted that while the city’s population may number only around 300,000, shoppers also come in from the Mat-Su and other parts of the state. Plus, there are the throngs of tourists who arrive in the summer.

Instead of asking why certain businesses aren’t here, Begich instead suggested it’s better to ask: “Why aren’t they here yet?”

Despite the lack of brick-and-mortar locations in Alaska for these companies, and others with a devoted following nationwide, options for similar goods and services abound locally. There’s Natural Pantry and Blue Market AK for folks seeking out organic and natural products, and specialty markets like New Sagaya, Mexico Lindo, New Central Market or Anchorage Halal Market for those wanting something specific. Ikea items can be ordered through the Anchorage company Shop + Deliver, but there are plenty of furniture options at local stores that would also love your business.