Holes have been found in protective liners beneath Valdez oil tanks. Is that a problem? 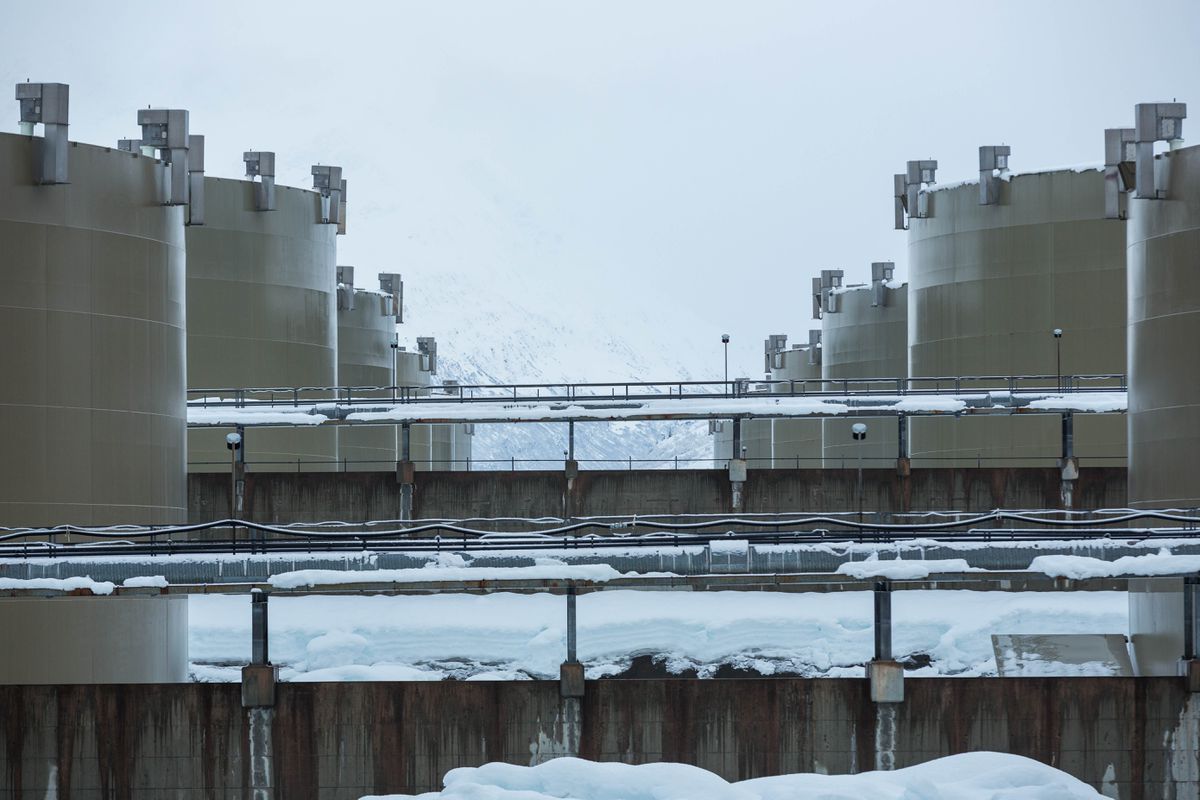 An oil-spill watchdog group wants a broad inspection of the aging spill-prevention liners beneath the giant crude oil tanks in Valdez near Prince William Sound following the discovery of large holes and cracks in the material.

The Prince William Sound Regional Citizens' Advisory Council says the time-worn liners may not be able to do their job — backing up the steel tanks should one leak. That could lead to spilled crude reaching groundwater.

Alyeska Pipeline Service Co., manager of the 14 operational tanks and the Valdez Marine Terminal where North Slope oil is loaded onto oceangoing tankers, said it has met regulatory requirements and repaired the damage when discovered.

State regulators also say the liners, described as up to 1 inch thick and similar in appearance to roofing tar, are "sufficiently impermeable." That meets the requirement that they can delay a spill long enough to allow spill responders to remove oil before it reaches groundwater.

But officials with the Citizens' Advisory Council argue that the damage has been discovered often and regularly enough — during excavations for unrelated projects — to suggest that other holes and cracks exist in portions of liners that have not been unearthed.

"It seems questionable, based on these holes they are finding, that the rest of the liner is in better shape," said Austin Love, who oversees terminal operations for the council, a group created by Congress after the 1989 Exxon Valdez oil spill.

Since Love joined the council in 2014, the largest hole discovered was 5 feet by 2 feet. Others have been 1 foot across or bigger, while some were smaller, Love said. A network of cracks was revealed last summer, spread across about 5,000 square feet. The cracking wasn't continuous but some cracks penetrated the liner, he said.

The problems came to light as Alyeska replaced damaged underground pipes that drain rainwater. The liner damage was "pre-existing," not caused by the excavations, he said.

The council's concerns date back 14 years, the result of discoveries of liner damage before 2014, Love said.

The liner was installed in 1977, along with the regularly inspected storage tanks, he said. The liner is part of a secondary containment system, with the tanks the first layer of protection. The 250 foot-diameter storage tanks are 60 feet tall, he said. Each can hold about 500,000 barrels, roughly double the amount of crude oil spilled into Prince William Sound from the Exxon Valdez in 1989.

By state regulation, Alyeska receives a "prevention credit" for the secondary containment system that sharply reduces the volume of a potential spill from the tanks that it must plan for, Love said.

With the damage to the liner discovered so far, the council wonders "how that prevention credit is still applicable," Love said.

Alyeska does not believe the liner is compromised, said Michelle Egan, Alyeska's director of corporate communications.

The liner is covered by 3 to 5 feet of compacted gravel and soil. When exposed, it's inspected and repaired if needed, she said. Labs have tested samples for "permeability and durability," and the liner has met requirements.

"To date, we have not had to take additional action following lab results," she said.

Egan said a tank bottom has never leaked, though tank bottoms were found to be corroded around 1990, leading to increased efforts to stop corrosion. Each tank also has its own protective membrane beneath it, made from a different material than the liner.

Egan said some excavations have not led to discoveries of damage. But those situations aren't always documented, while the holes and cracks are.

Love, who received most of his information about the liners from Alyeska and state and federal regulators, said Alyeska should share those results too.

Graham Wood, head of the Department of Environmental Conservation's prevention, preparedness and response program, said on Thursday that "a number of anomalies" have been found in the liner.

They're "concerning," he said, but each has been repaired upon discovery.

Suggesting that other holes may exist but have not been found is "speculation," he said.

The intent of the secondary containment system is protecting groundwater. That would happen in the unlikely event of a spill from a tank, which would prompt an immediate cleanup, he said.

Council officials, not so certain, want to see thorough sampling of the liners. They are looking for options that would not require excavations that could cause accidental damage.

A preliminary idea includes electrical leak location testing, with devices installed above and below the liner to detect any breaches.

A consultant for Alyeska has reported that the electrical testing is "not likely" to be successful. Love asserts that the consultant also suggested it's an idea worth further exploration.

Egan said she disagrees. One challenge is that the testing can't be done during "a wet or freezing time period." With water in the area and around the tank cells, "getting the area dry enough is virtually impossible," she said.

Alyeska believes its method of inspecting, testing and repairing liners as needed is the "most effective" approach because further exposure can hurt them.

Egan said testing is underway to determine the root cause of the cracking. She said that information might help inform the next steps.