Drilling for oil in Arctic National Wildlife Refuge is in the GOP tax plan. Sen. Maria Cantwell is trying to block it. 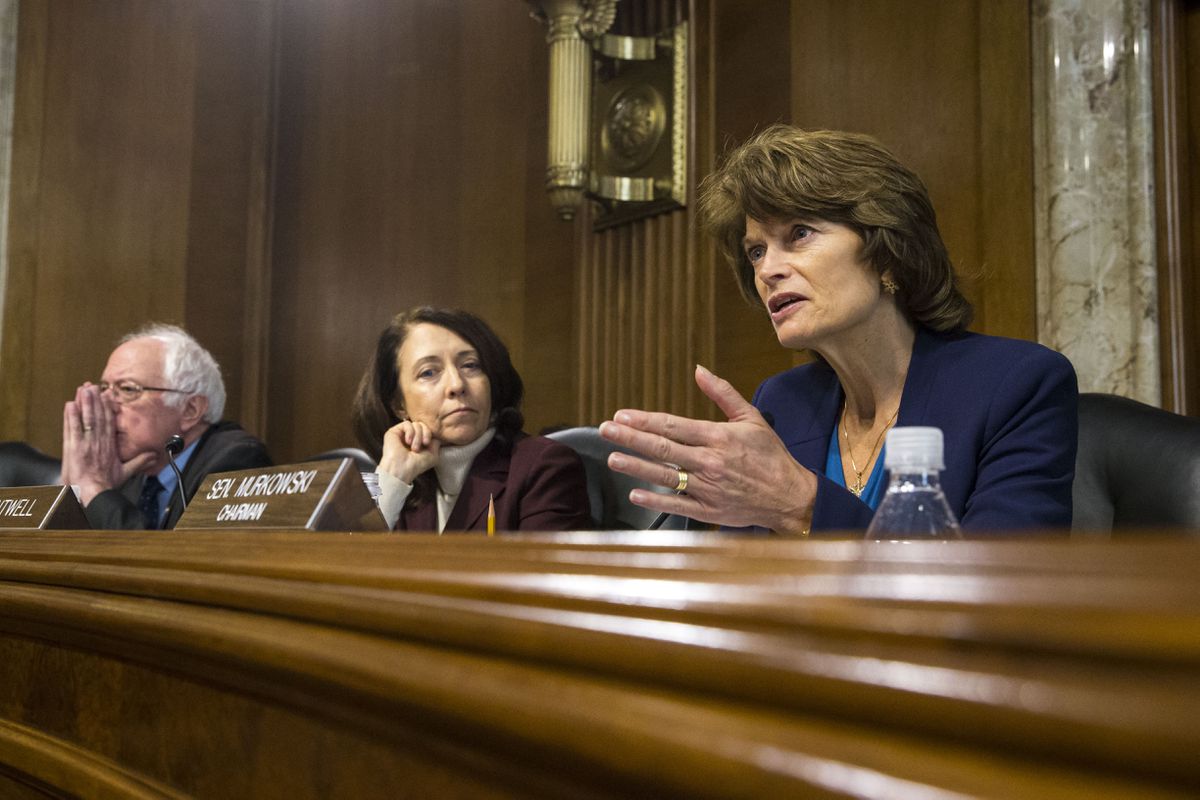 SEATTLE — In 2005, a first-term Democratic senator from Washington came out on top in a bristling confrontation with Alaska's senior Republican senator, then at the peak of his power and determined to fulfill his quest to open up the Arctic National Wildlife Refuge to oil development.

It was a signature victory for Sen. Maria Cantwell, burnishing her green credentials, as she corralled enough votes to defeat efforts by the late Ted Stevens to attach a refuge oil development measure to a military spending measure.

Twelve years later, Cantwell, now in her third term, faces a more difficult fight to block new legislation that would make petroleum production a purpose of the 1.5 million-acre coastal plain.

This area, part of the broader 19.6 million-acre refuge, is prized by Alaska's oil industry as prime for a major discovery. It also is championed by conservationists as the biological heart of the refuge, a crown jewel of America's wild lands where the Porcupine caribou herd calves, polar bears den and millions of migratory birds gather.

"This is one of the most intact ecosystems we have on the planet; why would we want to have oil and gas drilling in the middle of it?" said Cantwell, now the senior Democrat on the Senate Energy and Natural Resources Committee.

The Republican chair of the committee, Alaska's Lisa Murkowski, has crafted a measure that would authorize 800,000 acres of the coastal plain for exploration lease sales over the next decade.

The measure is attached to a bill to overhaul the nation's tax code that could be voted on as early as this week in the Senate.

By attaching the provision to drill to the tax legislation _–which is tied to the budget process — backers don't have to muster the 60 votes that would be needed to pass and overcome a filibuster that would be expected to meet a stand-alone bill.

It's a roll of the dice on a tax proposal that includes controversial cuts and reform measures.

Cantwell said in an interview she will do everything she can to block drilling in the refuge, including trying to strip out the authorizing language.

"We are going to have to fight on the floor to try to stop this," Cantwell said. "It's a backdoor process that only needs 51 votes. They would never get it in the normal process."

The coastal plain's fate has long been a topic of fierce debate, with the 1980 act that gave the refuge its name also setting aside a decision on oil leasing for a future Congress, according to a Congressional Research Service report.
During an earlier debate over the refuge in 2003, an Interior secretary under President George W. Bush dismissed the land as "flat white nothingness."

Subhankar Banerjee, a former Bellevue resident, showed otherwise as he launched his career as a photographer in the refuge. His book "Seasons of Life and Land" documented four seasons of abundant life in the refuge.

An American dipper, feeding in a pool of open water created by a warm-water spring, despite temperatures of minus-50 degrees. Musk ox stoically traveling with newborn calves in the middle of a blizzard on the open tundra. The most dense concentration of polar-bear dens anywhere in the U.S. arctic. Caribou by the hundreds of thousands, all around his tent.

"And of course millions and millions of birds from six continents, there are multiple connections and migrations, from all over the world," Banerjee said in an interview.

With President Donald Trump in the White House and Republicans in control of Congress, Murkowski wants a decision on a move that would offer a boost to a state struggling with declining oil production and prices. In an edgy committee session Nov. 15, Murkowski fended off repeated efforts by Cantwell and other Democrats to increase environmental and wildlife protections in the bill.

"If we are allowed to go ahead with development, we will do it right and we will take care of our lands, our wildlife and our people," Murkowski said in an opening statement. She asserted that more compact and less-intrusive technology that has evolved since earlier Alaska oil discoveries would enable exploration and production to go forward without jeopardizing wildlife. "I would not support development unless I was convinced we could do it safely."

That oil, she noted, could provide a continued source of domestic crude for Washington and California refineries.

Cantwell has worked with Murkowski to forge legislation in what has been seen as a rare example of congressional bipartisanship. None of that was on display at this session. Cantwell lashed out at Murkowski for "sleight-of-hand legislation" that had bypassed full Senate hearings that would subject its provisions to more scrutiny.

"The notion that oil prices have fallen and the state has been overly reliant on oil does not mean we should destroy a wildlife refuge," Cantwell said. "The legislation before the committee would require that the refuge's coastal plain be placed in oil and gas development. It really does turn regular order on is head."
The bill declares there shall be oil and gas development in the refuge, and that the lease must include the lands of highest oil and gas potential. Though Murkowski says there will be full environmental consultation, Cantwell says the mandate to drill effectively does away with meaningful reviews under the National Environmental Policy Act.

Murkowski's bill would limit the oil field development to 2,000 surface acres. Cantwell maintains that is a meaningless number with exclusions that include gravel mines and roads that might be built.

If Congress authorizes oil and gas leasing in the refuge, exploration and possible development also could unfold on some 100,000 acres of Native inholdings within the coastal plain.

The bid to open the refuge comes as climate change driven by the combustion of fossil fuels is of increasing global concern, and some scientists warn that major Arctic fossil fuel reserves should be left in the ground.

"I think our children and our grandchildren are going to be looking back on meetings and markups like this and they are really going to be shaking their heads and asking what world was the United States Senate living in," said Sen. Bernie Sanders, the Vermont independent, during the Nov. 15 committee session. "At a time of devastating damage done by climate change, responsible people were talking about more exploration for fossil fuels and not addressing the planetary crisis of climate change."

Climate change is having some of its most serious impacts in higher-latitude climates, including Alaska where some Native villages are at risk of being destroyed by sea level rise and wildlife such as polar bears are literally losing ground as sea ice melts out from beneath them.

Yet since the discovery of oil in Prudhoe Bay in 1968, Alaska's economy — more than any other state in the union — has been tied to fossil fuel production.
Prudhoe Bay lies on state land, and petroleum revenues from crude flowing through the trans-Alaska pipeline provide most of Alaska's fiscal budget. Oil revenues also have built up the Permanent Fund, a state oil-wealth savings account that as of Sept. 30 was valued at more than $61 billion and this year is paying out $1,100 dividend checks to Alaskans.

In recent years, declining Prudhoe oil production coupled with lower prices have created a fiscal crisis with multibillion-dollar budget deficits, sending shock waves through the Alaska economy and political establishment. All of this has increased the political urgency in Alaska for finding more oil. There have been some promising discoveries, and many Alaskans are eager for more.

"The truth is that the need to keep feeding the 40-year-old pipeline with oil is a key factor behind the current drive to open ANWR to fossil fuel drilling," wrote Philip Wight, in Yale Environment 360. "The volume of oil flowing through the Alaska Pipeline has fallen sharply in recent decades, from a peak of two million barrels of North Slope oil a day in 1988 to 500,000 barrels a day last year."

Though leasing for exploration may happen during the next decade, any production on the coastal plain would take many more years.

Currently, other federal lands in Alaska are open to leasing, and the Trump administration, through executive action, is pushing to open substantial new areas outside of the wildlife refuge.

Kara Moriarty, president of the Alaska Oil and Gas Association, says the industry needs lots of places, including the coastal plain, to explore to find the fields that will be profitable to develop.

"It goes without saying that the industry has long supported having access," Moriarty said.

A 1998 report found the most likely scenario would be the discovery of 7.7 billion barrels of recoverable oil within the plain. The report noted a 5 percent possibility of as much as 11.8 billion barrels, an amount that if pumped over time would rival the total output of Prudhoe Bay during the field's first 38 years of production.

Cantwell says the U.S. already has plenty of oil reserves, and should not turn to the wildlife refuge for crude production

"How could it possibly, possibly coexist with the purpose of the refuge?" Cantwell said in the hearing. "You are taking a wildlife refuge and turning it on its ear."