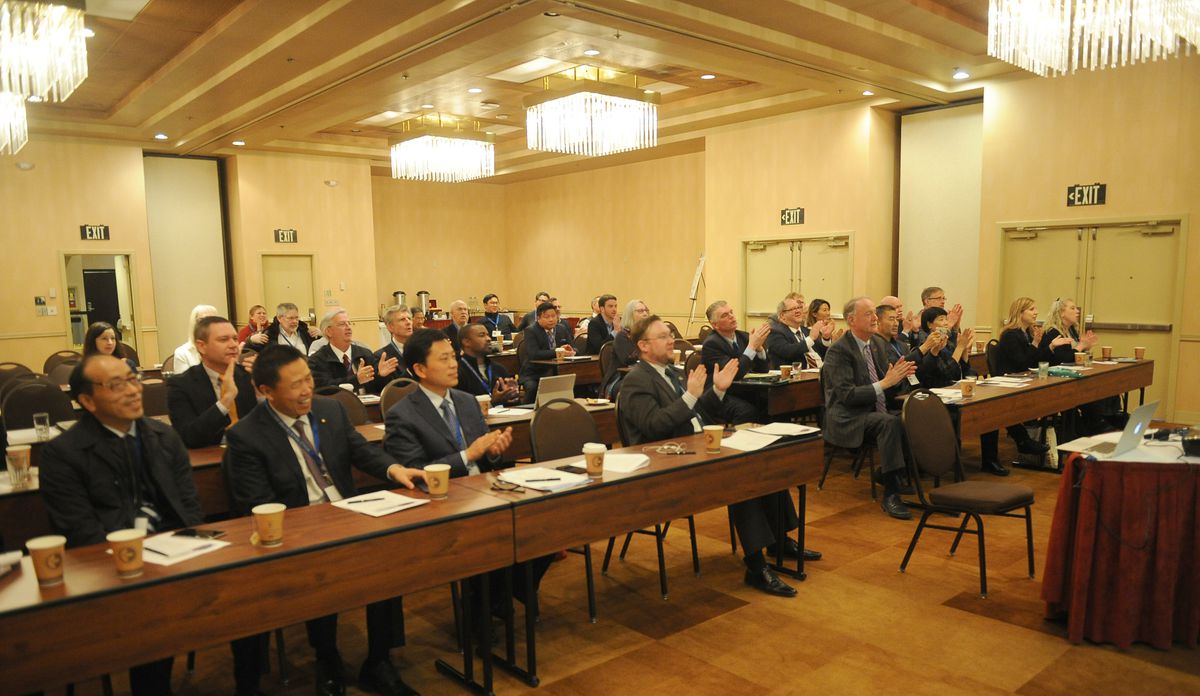 Attendees listen to a presentation during the Alaska-China Business Conference at the Lakefront Anchorage Millennium Hotel in Anchorage on Tuesday. (Bob Hallinen / ADN)

Attendees listen to a presentation during the Alaska-China Business Conference at the Lakefront Anchorage Millennium Hotel in Anchorage on Tuesday. (Bob Hallinen / ADN)

A Chinese bank official involved in talks with Alaska over the $43 billion natural gas line project said on Tuesday the Bank of China is taking steps toward arranging a group of lenders to cover the project's huge financing costs.

But Raymond Qiao, managing director of the Bank of China's New York branch, cautioned that there is still a long way to go before Chinese entities such as his decide to invest in the project.

He said the project will probably be built, citing "advantages" that include Alaska's proximity and giant gas resources and growing demand in China for the resource.

Qiao said China is very interested in the project that would deliver North Slope natural gas to Asian markets. The gas would be shipped down an 800-mile pipeline and super-chilled into a liquid for ocean-going export out of Nikiski.

With its giant up-front costs, some observers have expressed skepticism that the nonbinding agreement signed in November between Alaska officials and Chinese entities will lead to a hard deal.

The signing, viewed in Beijing by President Donald Trump and Chinese President Xi Jinping, was one of multiple business deals made as part of Trump's trade mission to China.

The Chinese-owned companies agreeing to talks with Alaska were the Bank of China, oil giant Sinopec and the $800 billion sovereign wealth fund China Investment Corp.

[Here are 5 big questions about Alaska LNG's deal with China]

Hugo Brennan, an analyst at Verisk Maplecroft, called the deal a political opportunity that companies could back away from later.

China's interest is "serious" and not about politics, said Qiao.

Qiao was in Anchorage for a short trip at the invitation of the World Trade Center Anchorage. He spoke at the group's annual conference promoting trade ties between Alaska and China, the state's largest trading partner.

To be clear, there are many obstacles that must be overcome before the Chinese entities can invest, Qiao said after his presentation.

He said many people are working on those, including Alaska Gasline Development Corp. officials headed to China this week for ongoing discussions with the companies.

"This is still preliminary, subject to business terms, negotiations, legal terms and government approvals from both sides," he said.

Lieza Wilcox, a vice president at the Alaska gas line agency, said the parties are working toward reaching a firm commitment by the end of 2018, as laid out in the agreement.

Qiao, who traveled to Alaska last summer and visited potential gas line work sites including Prudhoe Bay, said the Bank of China is working to bring together a team of banks to finance $32 billion of the project.

"So we are arranging for that," he said.

The remaining $11 billion would be equity from Sinopec, China Investment Corp., the state of Alaska and potentially other investors, he said.

The project is "promising," he said. "If all the parties can try their best to control costs, get all the environmental issues cleared, obtain all the government approvals."

Faqiang Ren, China's deputy consul general in San Francisco, told a reporter Tuesday the signing in November was only "the first step in a long march."

He said the project is a "win-win" for both sides. He hopes governments, conservation groups, media and others support it.

"Forty-three billion dollars is not small money," he said.

"We hope from many rounds of talks they can reach a mutually beneficial deal for Alaska and China markets," he said of the negotiators.