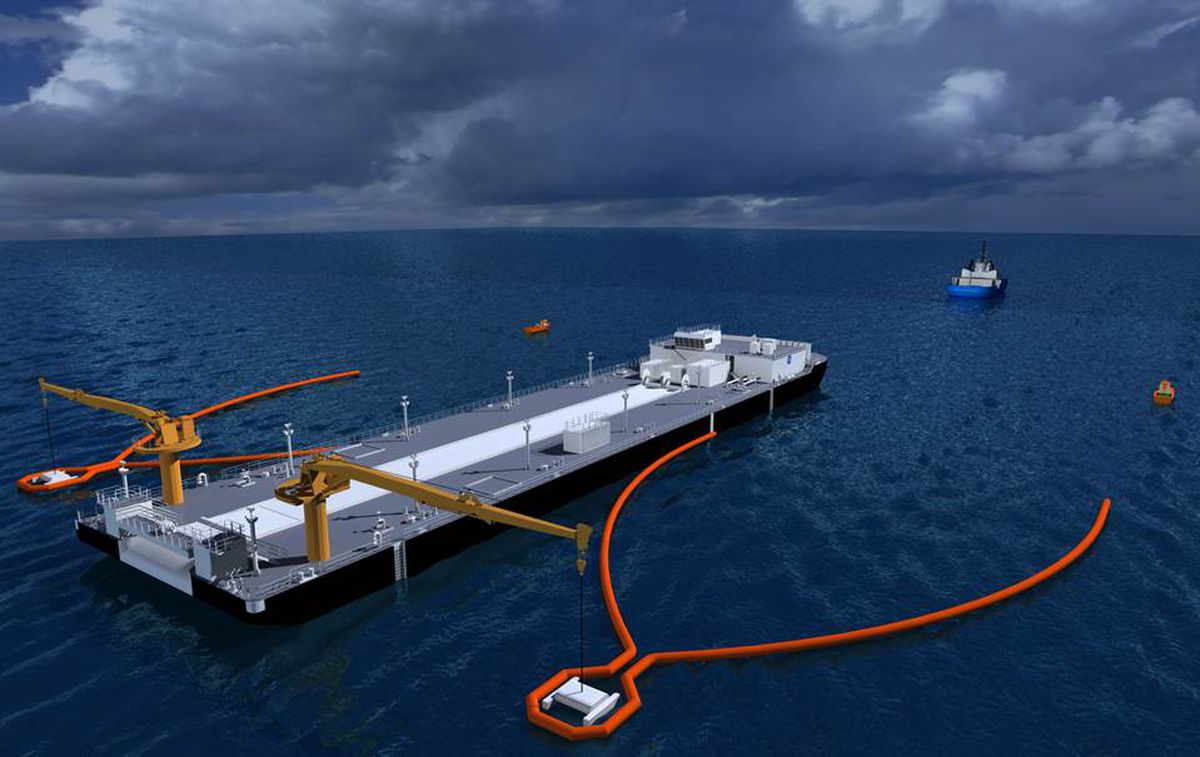 A diagram for an Edison Chouest spill response barge shows an orange boom to corral oil and skimmers suspended off either side to suck up oil. (Photo provided by Alyeska Pipeline)

A diagram for an Edison Chouest spill response barge shows an orange boom to corral oil and skimmers suspended off either side to suck up oil. (Photo provided by Alyeska Pipeline)

Edison won't take over until July, when a 10-year contract begins and after state and federal regulators have signed off on the new ships following sea tests in the Gulf of Mexico and Alaska. The first of the ships is set to arrive in March.

Critics have argued that Edison Chouest, which was partly responsible for the 2012 wreck of the Kulluk during Shell's Arctic drilling campaign, isn't ready for the Sound's rough conditions.

Design flaws in Edison's tug, the Aiviq, contributed to the Kulluk grounding off Alaska's coast, the Coast Guard concluded in 2014. Edison Chouest has maintained it was not at fault.

A watchdog group Congress created after the 1989 Exxon Valdez oil spill in the Sound has offered preliminary praise for the new designs, after seeing the first ships being built last year at Edison shipyards in Louisiana and Mississippi.

But officials from that group, the Prince William Sound Regional Citizens' Advisory Council, say they are withholding final judgment until boats and new crews have been properly tested in Alaska.

Though the state agency is pleased with the improvements so far, each new vessel and all crews must meet the standards, said Geoff Merrell, the agency's central region manager.

"When there are transitions like this, you introduce a certain amount of risk with new people operating new equipment in a new area," he said.

Donna Schantz, the council's executive director, visited Edison shipyards in November and said the new tugs and gear are "impressive." But they need to be tested.

The upgrades are "huge," said Kate Dugan, an Alyeska spokeswoman.

There are currently 10 tugs and four barges, and those numbers won't change, she said. But the new tugs will replace tugs roughly 20 to 40 years old.

At least 20 percent of the 200-person workforce is expected to be Alaska Natives, who will likely live in Alaska, said Dugan.

Most of the workers are expected to come from Outside, at least in the beginning.

Eight oil-sucking skimmers — two would be suspended off each barge in the event of a spill — will be the largest of their kind, said Dugan. Each has 100 spinning metal discs covered with an oil-soaking, fur-like material. Squeegees will wring oil from the discs into tanks.

The new skimmers will double the amount of oil collected compared to the current skimmers, she said.

The new escort tugs will have 20 percent more horsepower, with heated decks, handrails and windows for crew safety.

They'll have infrared cameras and radar for oil detection and targeting the densest patches. Four of the existing tugs have that capability, she said.

Old tug winches will be replaced with new ones that employ motors to keep constant tension on tow chains and ropes. The feature reduces the risk that lines will snap as tankers heave.

"We pushed for that a long time," said Schantz, with the council.

Crowley has provided docking services since 1977 for tankers in Valdez, where oil from the trans-Alaska pipeline is loaded onto the ships. Crowley has been "amazing" and is allowing Edison pilots to go on ride-alongs, according to Dugan.

"Crowley has been very gracious about letting (Edison Chouest) folks on board and showing them the ropes," said Dugan.

Jim Herbert, chair of the council's committee for oil spill prevention and response, said he visited Edison shipyards in May.

The company took all questions and allowed visitors to go where they pleased, he said.

"I left with a great deal of confidence," Herbert said. "Everyone would agree that company builds quality boats. But we want to see those boats demonstrated in the Sound."

Uncertainties remain. One is how well a large extension to the new tugs' underside, called a skeg and designed to stop tankers by creating extra drag, will affect maneuverability.

"You want to understand the limitation of equipment and crew in a test, not an emergency," said Schantz.