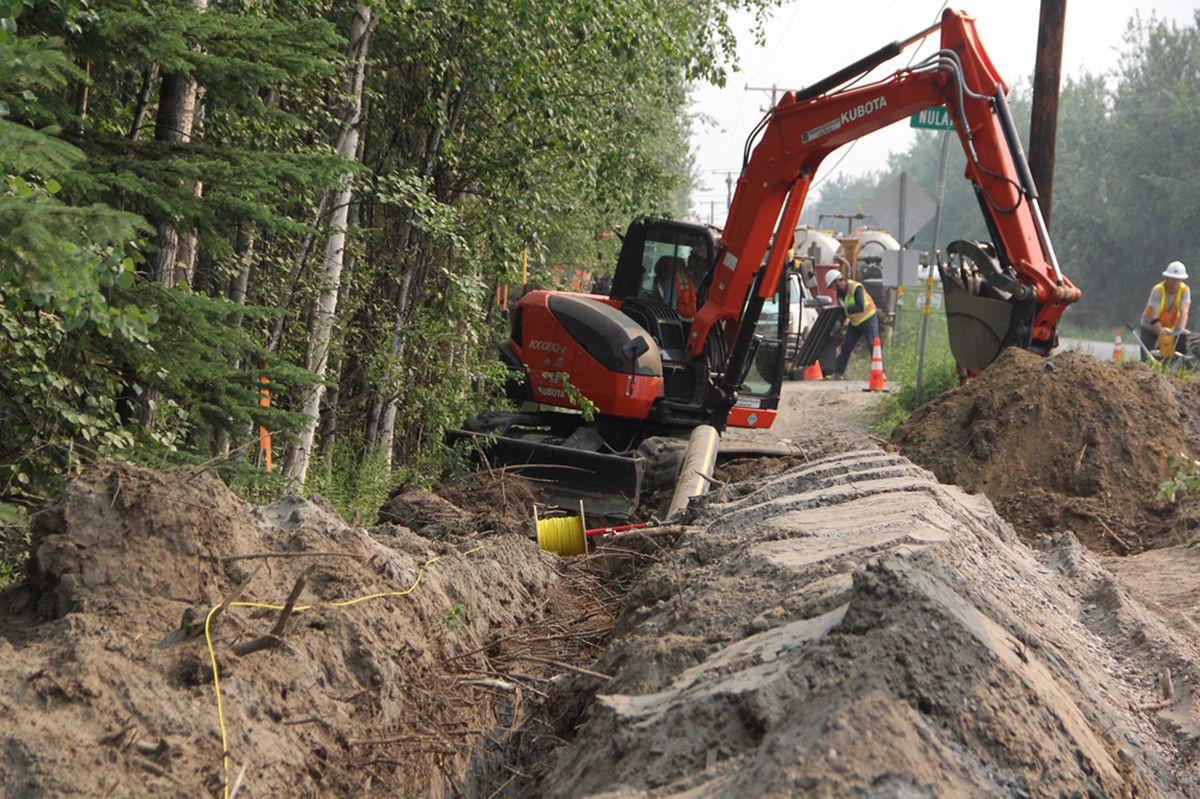 Workers are seen laying natural gas supply lines in North Pole in summer 2015 as part of the Interior Energy Project first authorized by the Legislature in 2013. More than five years later, utility officials in charge of the project will explore a new plan from Siemens that proposes to deliver LNG via rail from a plant near Houston. (Elwood Brehmer/AJOC)

Workers are seen laying natural gas supply lines in North Pole in summer 2015 as part of the Interior Energy Project first authorized by the Legislature in 2013. More than five years later, utility officials in charge of the project will explore a new plan from Siemens that proposes to deliver LNG via rail from a plant near Houston. (Elwood Brehmer/AJOC)

Utility officials have signed a one-year agreement with Siemens Government Technologies to further investigate the company's plan to get more and cheaper natural gas to Interior Alaska.

The Interior Gas Utility board of directors voted 4-2 on Oct. 23 to enter into a memorandum of understanding with Siemens. Company representatives have said for more than a year that they, leading a consortium, can put together an LNG supply chain that is competitive with the Interior Energy Project plan IGU and the Alaska Industrial Development and Export Authority have already agreed to.

The Siemens team also contends its "turnkey" project would relieve IGU from much of the work it would have to do for the Interior Energy Project; all the utility leaders would have to do is sign a liquefaction services agreement, or LSA, and wait for the Alaska Railroad to deliver LNG to the utility's storage tank in south Fairbanks.

However, either party can terminate the MOU with 30 days' notice.

It also calls for Siemens and IGU to finalize an LNG supply contract term sheet by the end of the year and for Siemens to make a fixed-price LNG supply offer to the utility within five months of the term sheet being completed, which would be May on the current schedule.

"It's really just an agreement to collaborate; that was the way that I thought about it," IGU attorney Robin Brena said before the vote.

Siemens is working with the Knik Tribe and Knikatnu Inc. to put together its 20-year LNG supply chain from Southcentral.

At the heart of the plan is a pair of Siemens' modular "LNGo" gas liquefaction units that can produce up to 30,000 gallons of LNG per day. The plan is to initially install two LNGo units at a proposed industrial park on Knikatnu land near Alaska Railroad Corp. tracks in Houston.

The fuel would travel by rail to IGU's 5.25 million-gallon LNG storage tank currently under construction in south Fairbanks for regasification and distribution to residents and businesses.

Once gas demand grew to where more than four of the LNGo units were needed, the company would look at installing a single, larger LNG facility, according to Siemens officials.

Siemens Energy and Infrastructure Director Kelly Laurel and other Siemens officials have acknowledged that the company hopes to parlay work with IGU into more gas supply projects in the state, notably at Interior military bases.

A crucial element of any Interior LNG plan, Laurel said Oct. 23 that Siemens has agreed upon terms with a Cook Inlet producer for feedstock natural gas. She would not name the producer, but said the company and potential gas contract terms could be disclosed to those doing due diligence to validate the LSA, but that would be done under confidentiality as well.

Siemens has consistently stated a belief it can get feedstock gas for $5 per thousand cubic feet, or mcf, or less, which would be significantly cheaper than pricing much larger Southcentral utilities have been able to secure in recent years on much higher volume supply contracts.

IGU currently has a short, three-year gas supply contract with Hilcorp Energy for $7.72 per mcf. AIDEA officials participated in negotiating that contract and generally consider it a win given it is for a small base load of roughly 1 billion cubic feet, or bcf, per year with expected, but unsure, demand growth once liquefaction capacity is added in some form.

The Siemens-led group is also investigating the prospect of developing potential gas reserves in the Houston area, which would bring the feedstock price down to $4 per mcf, according to the company's project documents.

Gary Wilken, a former AIDEA director who was recently appointed to the IGU board, voted against signing the MOU on a belief it will unnecessarily drag out the Interior Energy Project that AIDEA and the Fairbanks utilities have been working on since 2013.

"From the beginning this project has been dancing on the head of a pin," Wilken commented during the meeting.

"I'm very concerned that we are doing nothing but extending this project and creating continued uncertainty that will hurt us financially and it'll hurt us with the very customers that we are trying to elicit support (from)."

AIDEA and IGU have estimated their plan, with its state financing support, would result in an initial $17.30 per mcf burner tip price to consumers in 2020. That price could drop to the $15 per mcf IEP goal by 2022 more customers are brought online.

Using IGU's contract price, Siemens would get LNG to the Fairbanks storage tank for $17.98 per mcf, according to the company — plus $5 to get it all the way to customers.

Wilken has long said he is open to alternatives — several of which AIDEA has evaluated — to the current plan of adding LNG capacity to the small Titan LNG plant that is now IGU's, but he's skeptical of the Siemens plan largely because of the company's unwillingness or inability to provide firm pricing on key elements of the project.

IGU vice chair Jack Wilbur joined Wilken in voting "no," saying he doesn't have any confidence Siemens will have a firm offer for the utility to consider by next May.

Board chair Pamela Throop said the MOU is needed to finalize the details of the plan and without it the alternative plan would die now.

"I'm happy to give them the time to do what they need to do to put together a proposal. I think we owe that to this community," Throop said.

IGU director Steve Haagenson said he was in favor of the MOU because IGU has ostensibly been bound to AIDEA's LNG development plan for years and needs to be able to evolve with new information.

As for the current plan, IGU General Manager Dan Britton said he expects the utility to have completed engineering and design on the Titan expansion plan by mid-May as well.

The utility should have prices on project components at that point, according to Britton, but a final construction price will still need to be penciled out. Expanding the Titan plant to meet expected natural gas demand growth in the Fairbanks area is currently estimated to cost $46 million.

Additionally, the AIDEA board of directors would have to approve of IGU formally contracting with Siemens or any other LNG provider because the Titan expansion plans were part of the $331 million package in which AIDEA sold Fairbanks Natural Gas to IGU and agreed to finance gas supply and distribution infrastructure build out with Interior Energy Project grants, loans and bonds the Legislature approved in 2013.