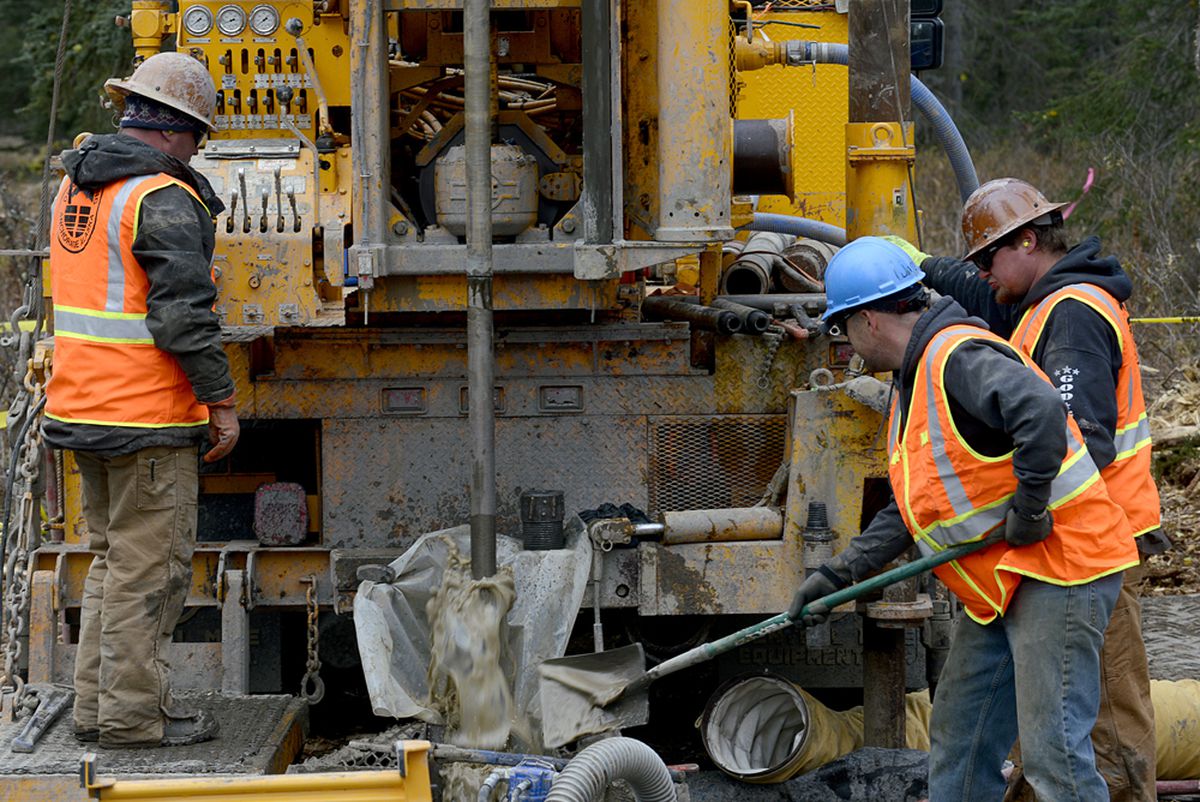 Workers obtain a soil sample near Autumn Road on Oct. 9, 2014, in Nikiski, where the Alaska LNG Project would locate a facility to cool natural gas into a liquid form for export. Alaska Gasline Development Corp. staff told federal regulators it plans to begin work to relocate a stretch of highway near the proposed site next year, although it still lacks funds for land acquisition or construction. (Rashah McChesney / AJOC file)

Workers obtain a soil sample near Autumn Road on Oct. 9, 2014, in Nikiski, where the Alaska LNG Project would locate a facility to cool natural gas into a liquid form for export. Alaska Gasline Development Corp. staff told federal regulators it plans to begin work to relocate a stretch of highway near the proposed site next year, although it still lacks funds for land acquisition or construction. (Rashah McChesney / AJOC file)

The Alaska Gasline Development Corp. has told federal regulators that it plans to start building construction camps and access roads at the natural gas liquefaction plant site in Nikiski in the first quarter of 2020 and along the 807-mile pipeline route by the second quarter.

Sticking to that schedule assumes the state corporation can sign LNG customers to binding long-term contracts, complete the deals to buy gas from North Slope producers, find investors and financing for the estimated $43 billion project, acquire the rights to about 900 acres of land in Nikiski, secure any state legislative approvals that may be needed, work through all the required federal and state regulatory authorizations, and reach terms with contractors and suppliers for one of the most expensive energy projects in U.S. history.

LNG developments proposed along the U.S. Gulf Coast, in Canada and elsewhere in the world face many of the same issues.

AGDC has been talking for the past year with Chinese interests about taking 75 percent of the Alaska project’s LNG capacity while financing 75 percent of development costs. No firm deals have been announced.

The project’s latest schedule presented to the Federal Energy Regulatory Commission on Nov. 6 also says work would start in early 2019 on relocation of a few miles of state highway in Nikiski to make way for the gas liquefaction plant and marine terminal.

However, the state corporation leading the North Slope natural gas project lacks funding to buy land for the highway relocation or to contract for its construction.

AGDC’s work schedule presented to FERC is not binding; it’s the corporation’s best estimate of what it wants to accomplish. Federal regulators on Oct. 2 asked for an updated project timeline to include in the draft environmental impact statement, or EIS, which is due for release in February 2019.

But unless the Legislature appropriates additional state money or the corporation raises funds from other sources, the project could run out of funding by the end of calendar year 2019, about the same time FERC is scheduled to release its final EIS in November 2019, according to a spending plan prepared for the AGDC board’s Nov. 8 meeting.

As such, the corporation is planning to approach potential investors in late 2018 or early 2019, according to a report at the board’s Oct. 11 meeting.

The presentation for investors “will outline equity offer terms, methods of investment and commercial structuring,” according to the information given to the board.

The corporation plans to spend between $3 million and $4 million per month in the current fiscal year that ends June 30, 2019.

The project schedule submitted to FERC on Nov. 6 assumes the commission issues its authorization for construction by February 2020 — within the 90-day deadline after the final EIS.

“The forecasted schedule for both the draft and final EIS is based on AGDC providing complete and timely responses to this and any future data requests,” FERC reminded the project team Oct. 2 when regulators presented the state with 63 pages of information requests. The potential for any new information requests will depend, commission staff told AGDC representatives at an Oct. 18 meeting, on whether the corporation’s information is complete or prompts follow-up questions.

If AGDC and its partners move quickly to a final investment decision after receiving FERC authorization, the project schedule calls for site preparation to begin in early 2020 at the LNG terminal and later that year along the pipeline route. Sealifts of large production modules aboard barges to the North Slope would start in 2023.

The state project team on Nov. 6 provided FERC with some of the additional information requested last month, as AGDC nears the end of submitting data needed for the draft EIS. The latest information included:

• A list of 34 potential sites where four rock crushers would be set up and moved as needed to provide material during pipeline construction, operating 24 hours a day between eight and 49 days at each site.

• The location, acreage, number of crew beds and duration of use for the 29 pioneer work camps that would be set up for initial site prep and access road construction along the pipeline route. Each camp would cover about four acres, with accommodations for 120 workers, with the first camps going in by the second quarter of 2020.

AGDC plans to submit by Nov. 19 the final batch of information requested last month by FERC, including:

• Additional details on construction plans to lay concrete-coated pipe across 29 miles of the seafloor from the west side of Cook Inlet to Nikiski.

• Further information on potential impacts on permafrost during and after construction.

• Additional geotechnical and geophysical studies of the feasibility of trenchless pipeline crossings at specific waterways.