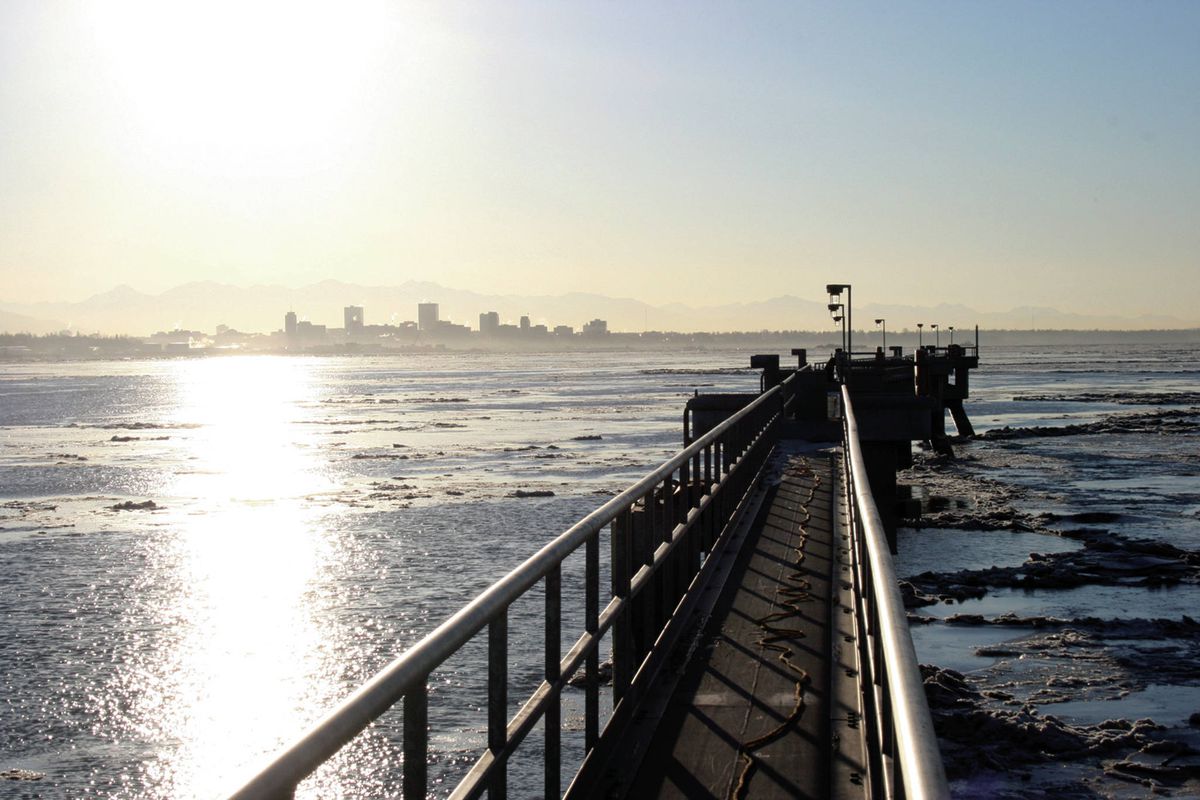 Downtown Anchorage is seen across Knik Arm from the Port MacKenzie dock in the Matanuska-Susitna Borough. (Alaska Journal of Commerce archive)

Downtown Anchorage is seen across Knik Arm from the Port MacKenzie dock in the Matanuska-Susitna Borough. (Alaska Journal of Commerce archive)

The state’s gas pipeline development corporation and the Matanuska-Susitna Borough continue debating the worthiness of the borough’s Port MacKenzie property for the proposed Alaska LNG Project, as the state’s latest filing with federal regulators accuses the borough of “factual and legal errors.”

The borough’s most recent comments to the Federal Energy Regulatory Commission “simply nit-pick (erroneously, in many instances) around the edges,” the Alaska Gasline Development Corp. told federal regulators Feb. 13.

The corporation has not strayed from its choice of Nikiski on Cook Inlet as the best site for the gas liquefaction plant and export terminal. The borough, however, is contesting the state-led project’s evaluation of Port MacKenzie at the entrance to Knik Arm, across from Anchorage, about 65 air miles northeast of Nikiski.

Both AGDC and the borough are adding to the file at FERC, which is preparing the project’s environmental impact statement, or EIS. FERC is scheduled to release the draft EIS by the end of February, followed by public hearings and comments, along with comments from federal and state and municipal agencies, and then, if the environmental review stays on schedule, a final EIS in November.

AGDC denies the borough’s assertion that its analysis is flawed. But even if the review of Port MacKenzie were inadequate, AGDC said in its Feb. 13 filing with FERC, “(the) Matanuska-Susitna Borough’s comments do not change the unavoidable conclusion that the significant environmental impacts and safety concerns associated with siting the Alaska LNG liquefaction facilities at Port MacKenzie render it an inferior alternative to AGDC’s proposed site at Nikiski.”

Because of the considerable environmental issues of building at Port MacKenzie, AGDC told FERC, the regulators do not need to address every issue raised by the borough “to fulfill its obligations under the National Environmental Policy Act to examine alternatives.”

The state corporation and the Mat-Su Borough, along with the Kenai Peninsula Borough in its defense of Nikiski, have all contracted with Washington, D.C., law firms that specialize in work at FERC.

Neither AGDC, the Mat-Su Borough nor FERC have raised any questions or added anything to the docket regarding the 7.0 earthquake that shook the Anchorage area on Nov. 30 and was centered about 5 miles north of Port MacKenzie.

Separate from the debate over the borough property, AGDC still owes a substantial amount of data to FERC, along with answers to more than 100 detailed questions about engineering and safety systems for the LNG plant, the gas treatment plant at Prudhoe Bay and the 807-mile pipeline from the North Slope to Nikiski. The corporation has said it will be September before it provides all the answers. Federal regulators have not said if that timeline for the missing data will affect the EIS schedule.

In its Feb. 13 filing, AGDC responded to the borough’s 145-page, Jan. 25 filing that listed why the municipal government believes the state project team shortchanged Port MacKenzie in its site consideration. The borough contends the state development team did not accurately map out and consider the “optimum site” proposed by the borough. “As a result,” the borough said, AGDC’s efforts “misidentify and overlook key features of Port MacKenzie.”

The borough further contends, “Rather than assessing Port MacKenzie as a unique site, AGDC begins from the assumption that the same facilities specifically designed for Nikiski will be built at Port MacKenzie. This assumption is irrational and leads AGDC to overestimate the amount of construction necessary to site a liquefaction facility at Port MacKenzie.”

Not true, AGDC told FERC on Feb. 13. Regardless of which exact site is mapped out at Port MacKenzie, there are multiple problems with building the LNG plant and marine terminal at the property.

The state corporation restated its concerns over conflicts with more frequent vessel traffic in the navigation channel to Port MacKenzie (across from the Port of Alaska) than in Nikiski; more significant ice conditions than at Nikiski; restrictions on when construction delivery ships and LNG carriers could cross the Knik Arm Shoal; and the impacts and restrictions of building in the critical habitat area for endangered beluga whales.

AGDC also took issue Feb. 13 with the borough’s analysis of berthing facilities, water depth, dredging and other issues at Port MacKenzie. And the state team told FERC that the existing haul road from the dock to the property is too steep to transport large modules to the upland construction site, regardless what the borough contends.

“In short, the Matanuska-Susitna Borough’s attempt to substitute its erroneous analysis for AGDC’s rigorous analysis and conclusions as to berthing and other design elements needed to construct and operate the project facilities reliably and safely should be rejected,” the corporation’s lawyer wrote to FERC.

The borough a year ago stepped up its complaints to federal regulators over AGDC’s analysis of Port MacKenzie as a potential site for the development. The borough charged that AGDC may have violated the National Environmental Policy Act and federal Clean Water Act by “improperly and intentionally excluding” Port MacKenzie as a “reasonable alternative” for the proposed LNG plant.

The borough has long promoted its money-losing port for the LNG project and other industrial developments, with little success.

Nikiski was selected as the preferred alternative from more than two dozen options in October 2013, when North Slope oil and gas producers ExxonMobil, BP and ConocoPhillips were leading the project. The state took over the venture in late 2016 after the companies declined to proceed with spending significant sums of money on additional engineering, design and permit applications. The state applied to FERC in April 2017.

“FERC has sufficient information to fulfill its responsibilities … to analyze Port MacKenzie,” the state corporation said Feb. 13. The borough’s suggestion that AGDC “should develop a site-specific design for Port MacKenzie … is unreasonable and not required for the commission to comply” with federal law, the corporation said.