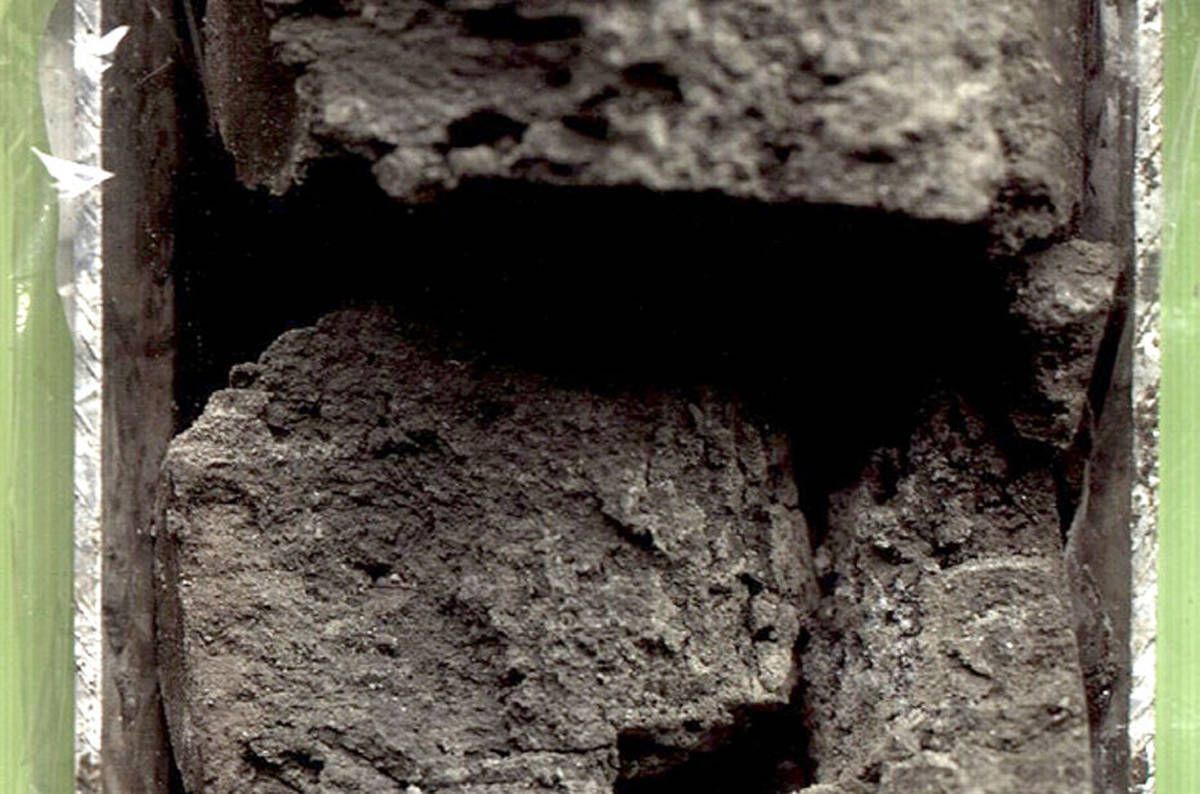 A close up of a hydrate core sample. (Courtesy Geological Survey of Canada)

A close up of a hydrate core sample. (Courtesy Geological Survey of Canada)

A research well drilled last winter into the Prudhoe Bay oil field could be a key to unlocking vast stores of yet untapped energy.

Last December, a consortium of scientists from the U.S. Geological Survey, Department of Energy and Japan Oil, Gas and Metals National Corp. partnered with BP to drill a shallow test well from an unused pad in the western portion of the large Prudhoe field into the rock layers above the oil and gas pools .

The well successfully targeted two formations of natural gas hydrate, the USGS said. It was also the start of a multi-year research endeavor with the ultimate goal of better understanding the viability of commercial gas hydrate production.

USGS senior scientist and University of Alaska Fairbanks graduate Tim Collett said the Prudhoe well represents what is likely the first gas hydrate research that goes beyond the realm of experimentation and into an actual production test.

“The (research) world pretty much knows this project well and points to it as a real pivotal event in gas hydrate, as you can imagine,” Collett said in an interview.

While an emerging and understudied potential energy source, the fundamental elements of gas hydrate are simple and well understood.

Gas hydrate is ostensibly made of natural gas trapped in ice crystals. On the North Slope it is known to occur above the Prudhoe Bay and Kuparuk River oil and gas fields in conventional porous sand formations, according to Collett.

It forms under a range of temperature and pressure conditions — just below the freezing point in permafrost as shallow as 1,000 feet down to temperatures as high as 50 degrees at depths of about 3,000 feet. The ideal pressure for gas hydrate is in the 1,500 pounds per square inch range, he said.

“It’s basically just a cage of water molecules organized around a gas molecule under a certain range of PT (pressure-temperature) and under those conditions the cage becomes rigid, so it’s a solid,” Collett described.

Gas hydrate reservoirs are appealing because they generally have more capacity to store than conventional gas reservoirs and they consistently form at relatively shallow depths, he added.

The Prudhoe well struck reservoirs at about 2,300 feet and 2,770 feet below the surface. Gas hydrate was found to be filling 65 percent to more than 80 percent of the spaces, or porosity, between the grains of sand and silt in the upper reservoir that comprise the rock formation, according to the USGS.

The gas hydrate accumulations on the North Slope hold the same natural gas as is found in the conventional reservoirs. When the hydrocarbon-bearing formations of Prudhoe Bay were charged 60 million to 120 million years ago they were tilted into an uplifted position and some of the gas and oil migrated to the upper end of the structure, Collett explained.

Much of the gas that moved upward ended up in the zone where pressure and temperature conditions would eventually become suitable for hydrate formation.

“About 1.6 million years ago, when Arctic conditions were established and permafrost originally formed — this is the period of glaciation — those gas accumulations were converted to hydrates,” Collett described.

The greater gas storage capacity in hydrate reservoirs comes from the fact that it is in a solid form.

“If I had a block of gas hydrate on my desk that was 1 square-foot it would produce approximately 164 cubic feet of gas and about 0.9 cubic feet of water,” Collett said.

A 2008 USGS assessment estimated there are roughly 85 trillion cubic feet, or tcf, of technically recoverable natural gas trapped in hydrate form beneath the surface of the Slope. For comparison, the North Slope’s massive conventional proven gas resources total about 35 tcf.

Collett noted that about one-quarter of the world’s land mass is underlain by permafrost and has the potential to hold gas hydrate. It is also found in some of the first layers of sediment where the ocean reaches depths of about 1,500 feet or more. Those are the places where the pressure and temperature regimes are favorable for hydrate formation.

Global hydrate estimates “are on order of tens of thousands trillion cubic feet” of gas, compared to about 7,000 tcf of proven gas resources worldwide, according to the Department of Energy.

With hard-to-fathom potential, it’s natural to wonder why more work has not been done to commercialize gas hydrate.

For starters, “The samples are very difficult to collect and take back to a lab and study,” said Ray Boswell, a geologist with the National Energy Technology Laboratory.

Additionally, the deep sea hydrate tests are exceedingly expensive and difficult to conduct long-term, Boswell said; and previous tests at Prudhoe in 2012 and Canada’s Mackenzie Delta 15 to 20 years ago were done on ice pads, which limited their duration to weeks instead of months or years.

Collett said gas hydrate was first identified in the 1940s in natural gas pipelines in Siberia; they would form and plug pipelines and that is still industry’s primary interest in hydrate formation.

The first samples from gas hydrate reservoirs were not taken until the mid-1990s, according to Collett.

U.S. government agencies have been studying gas hydrate for about 35 years and that work has mostly been focused on identifying the conditions needed for it to form, according to the researchers.

Boswell said the current test — fortuitously on an old, mostly unused gravel exploration pad — is focused on determining if gas hydrate can be produced long-term.

Japan Oil, Gas and Metals National Corp. is involved to learn more about gas hydrate on the hope of eventually being able to produce natural gas from subsea hydrate occurrences near the country, according to Collett. He said Japan and China in particular are interested in advancing gas hydrate development through their national oil companies because they currently import large amounts of energy through coal and liquefied natural gas.

Natural gas is produced from hydrate by depressurizing or warming the reservoir, which dissociates the gas and water.

Depressurizing the reservoir can be as simple as drilling a well into it, but maintaining those conditions can be difficult.

The researchers also noted that heating a hydrate reservoir requires heating all of the associated rock formation, which requires a lot of energy. Finally, the dissociation of the water and gas is an endothermic reaction, meaning it results in cooling that drives the hydrate back into equilibrium — yet another challenge.

“The reservoirs are in a solid state and they like it that way,” Boswell said.

As for the Slope study, BP Alaska spokeswoman Meg Baldino said the company allowed access to the pad, drilled the well using one of its contracted rigs owned by Parker Drilling and has supported hydrate research for decades.

Collett surmised that private industry has been slow to investigate gas hydrate commercialization because it is such a new realm of study and recent breakthroughs in unconventional oil and gas production mean there are ample opportunities for less speculative investments.

When those additional wells will be drilled is unclear at this point, as the agencies need to coordinate with the companies to work out when a drilling rig will be available again.

He said BP used drilling the first well “as an opportunity before the winter drilling season to, quote, ‘warm up a rig,’” and then moved on to the rest of their work.

With so many variables, the final cost of the research is also unclear at this point, but “as with anything in Alaska it’s not cheap,” Collett noted.

The data from the test and monitoring wells will eventually be entered into models that can estimate hydrate production over many years, which he said researchers are confident in. However, they have never had access to enough data to fully form the models.

“There’s many variables in this story and we try to simulate those in production models but without long-term tests to calibrate them you’re just at a limit to how much you can trust your modeling,” Collett said.

Melting permafrost has also been identified as a potential unwanted source of greenhouse gases; that is, if much of the world’s permafrost were to melt it could release the methane stored in gas hydrate form into the atmosphere. Such a process could exacerbate climate change because methane — pure natural gas — is a much more impactful greenhouse gas than carbon dioxide.

A 2017 report by Carolyn Ruppel and John Kessler entitled “The interaction of climate change and methane hydrates” concludes that large releases of gas hydrate-derived methane are unlikely in the near future simply because most of the landside hydrate formations are beneath more than 1,000 feet of permafrost.

“If we changed the temperature at the surface at Prudhoe Bay onshore 20 degrees (Fahrenheit) the base of the permafrost would not even see that change for 10,000 years,” Collett described. “That’s well documented; it’s good science.”

He said shallow subsea Arctic hydrate formations, such as under the Beaufort Sea, could release methane sooner as ocean temperatures rise, but it’s unlikely that would occur over a “human timeframe” — hundreds or thousands of years.

However, he acknowledged that does not change the fact that gas hydrate is another form of fossil fuels that if developed would add to global carbon emissions.

“You go down that (hydrate) pathway, you start dealing with the role of natural gas relative to coal, relative to renewables. There’s a whole series of additional discussions,” he said.

Boswell, Collett and the 2017 study all also note that methane releases from gas hydrate formations is a different issue than potential releases of carbon sourced from organic microbial processes trapped in shallow, discontinuous permafrost.