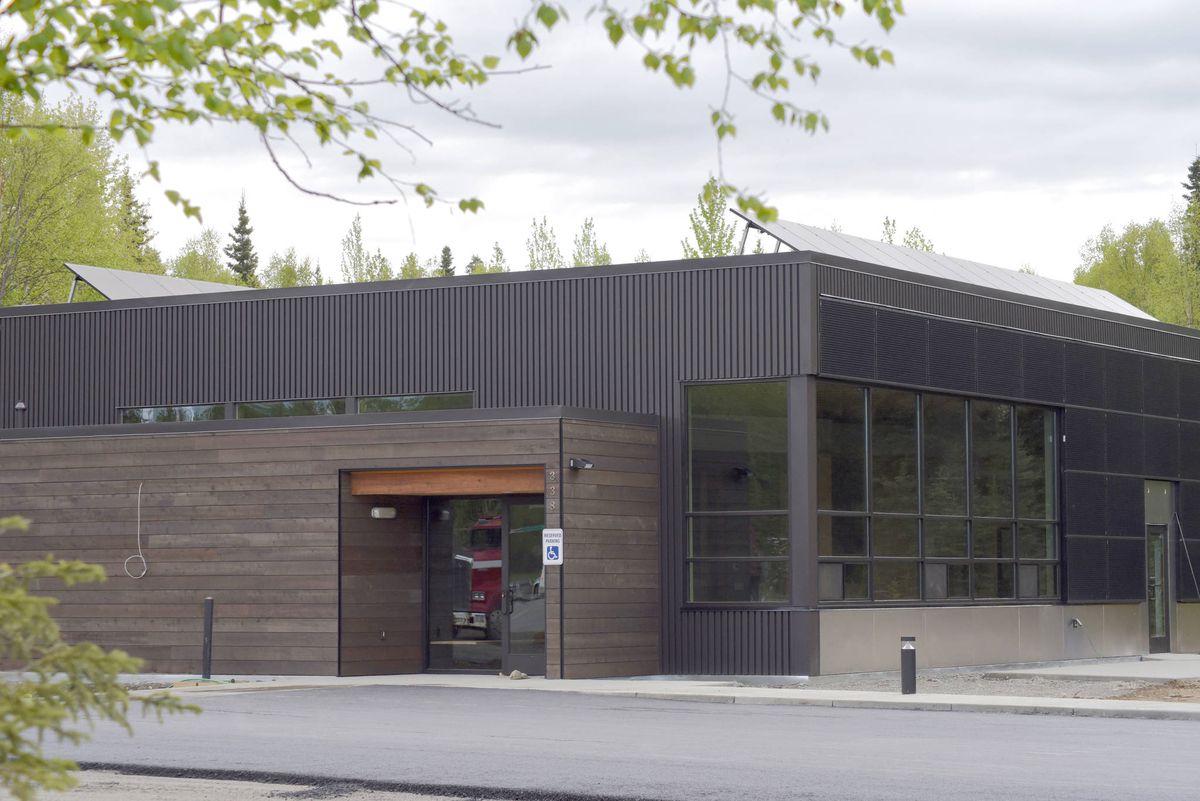 Solar panels gather energy on the roof of River City Books on May 24 in Soldotna. The panels, installed on a new building for the business this year, are expected to generate about 15 kilowatts of energy. (Photo bu Elizabeth Earl for the Alaska Journal of Commerce)

Solar panels gather energy on the roof of River City Books on May 24 in Soldotna. The panels, installed on a new building for the business this year, are expected to generate about 15 kilowatts of energy. (Photo bu Elizabeth Earl for the Alaska Journal of Commerce)

A new industry is lighting up Alaska.

Anchorage residents in particular have seen solar panels going up on buildings in their communities in the past five years. But across the state, more Alaskans are turning to the sun to power their homes and businesses.

Over the last four years, Arctic Solar Ventures in Anchorage has seen 200% year-over-year growth, according to owner Stephen Trimble. This year, the business will mark its first megawatt, or 1,000 kilowatts, of installed solar power.

“That’s a big achievement,” he said. “We have systems operating from Homer to Talkeetna.”

Despite common conceptions about Alaska being too dark and snowy to be practical for solar, the technology has a long history in the state, particularly in rural Alaska. The first Solar Design Manual for Alaska was published in 1981, with a revised fifth edition published in May 2018 by the Alaska Center for Energy and Power and the Cooperative Extension Service.

Off-grid cabins, fish camps and rural communities have long looked to alternative sources of energy as the cost of power in Alaska remains high.

However, even Railbelt homeowners and businesses have been moving toward solar power. There are a number of motivations for that, but a major one is likely the plummeting cost of solar installations. Between 1980 and 2012, module costs fell about 97%, according to a November 2018 study published in the journal Energy Policy.

“I would say in rural Alaska it’s become quite popular because it’s quite cheap,” said Erin Whitney, the manager for the solar technology program at the Alaska Center for Energy and Power, or ACEP. “It’s easy to install. Kits are pretty much turnkey. A wind turbine requires a massive foundation, which requires heavy equipment. If you’re in a rural village, it’s expensive, whereas a solar panel setup — that can be installed in a day.”

Trimble said installers in Alaska have become somewhat innovative with methods to maximize the solar energy available, even during the winter. For instance, some buildings have solar panels installed vertically on their walls to prevent snow buildup, even though Anchorage gets far less snow than it used to as the climate warms, he said.

“Between March and October, you actually have more than 12 hours of daylight per day, even down in Anchorage,” he said. “We’ve done probably 20 or more homes that are 100% net solar for the year. At the end of the year, they net out having received 100% of their power from solar. For a lot of folks, that’s really surprising; it’s that peak season of March to October that we have so much that it makes up for the dark months of winter.”

The primary increase in solar power installations in the past decade or so has been on the Railbelt, Whitney said. The Anchorage metropolitan area, with approximately half the state’s residents, is pivoting toward solar in a number of areas.

The Solarize Anchorage campaign is blazing forward this summer in the Turnagain, South Addition, Spenard and Rogers Park neighborhoods, helping residents band together to hire a solar energy contractor for their homes.

ACEP and the Alaska Center have helped the residents with the logistics of the campaign, Whitney said. The installations aren’t cheap — a ballpark figure comes out to about $5,000 to $10,000 for a single homeowner, with larger installations costing more — but the discount comes from bulk purchasing and installations.

“Solarize is a concept that’s been done all over the Lower 48,” she said.

Multiple utility companies in the state have either installed solar or are seriously considering it. Golden Valley Electric Association installed a 563-kilowatt solar farm last year for about $850,000 after a $225,000 U.S. Department of Agriculture’s grant program incentivizing rural energy development.

Chugach Electric Association is currently planning to install an approximately 500-kilowatt solar farm in Anchorage for an estimated $2 million, while Homer Electric Association’s board of directors proposed a community solar project to its members but didn’t get sufficient commitment to move forward with one, according to HEA’s 2018 annual report.

There’s appetite for solar outside the Anchorage area. In Soldotna, local business River City Books is moving to a new building with a system of approximately 15 kilowatts on its roof installed by Anchorage Solar.

Part of the project takes advantage of federal programs — one being the USDA rural energy development program and the other through federal tax credits for qualifying solar energy programs. Five projects through the USDA were authorized for funds on the Railbelt outside of Anchorage and Fairbanks in 2018 alone, according to the USDA’s Energy Investment Map.

A number of Arctic Solar Venture’s systems have gone into communities along the Railbelt outside Anchorage. This year is the last year for programs to qualify for the full 30% tax credit, Trimble said. Next year, the credit will begin decreasing and will ultimately fall to a 10% tax credit for installed solar systems.

“Whether you’re politically conservative or politically liberal, it doesn’t matter, because if you’re assessing solar as a potential customer, there’s the environmental benefits, there’s the immediate electric bill savings on a daily, weekly, monthly basis that are very substantial,” he said. “Most of our solar installations produce power at about a third of the cost of what they pay.”

In addition to the decreasing cost of installation, utilities began allowing net metering in Alaska in 2010. Through net metering, homeowners or business owners can produce power from small energy systems and offset their energy bill through a utility company.

Net metering in Alaska is currently capped at 1.5% of total retail demand. Beyond that, it’s up to the individual utility to decide whether to allow more, Whitney said. The future growth of individual solar installations could be inhibited there.

“There’s certainly some discussions being had right now on whether it makes sense to change that limit,” she said. “Once you’re above that limit, it’s up to the goodwill of the utilities to continue allowing it.”

Raising that limit would reduce uncertainty for residents and certainly for installers.

Trimble and a number of other solar installers recently banded together and formed their own trade association: the Alaska Solar Energy Industry Association, or AKSEIA.

The continuation of the net metering program is on the group’s list of issue interests, as well as regulatory certainty from the state, he said. But the members are also able to share information and communicate about projects, as well as keep to an ethical code that will protect consumers from bad actors as the solar industry grows, he said.

“As any new industry tries to take shape, there can be people who come along when they see economic opportunity … and you get unqualified people doing work that can cause damage to homes, potentially produce injuries; at minimum, giving solar a bad name,” he said. “So we came up with this industry code of ethics to start introducing consumer protections from our side. We very much want to self-police and self-govern the industry, and everyone’s been very receptive.”