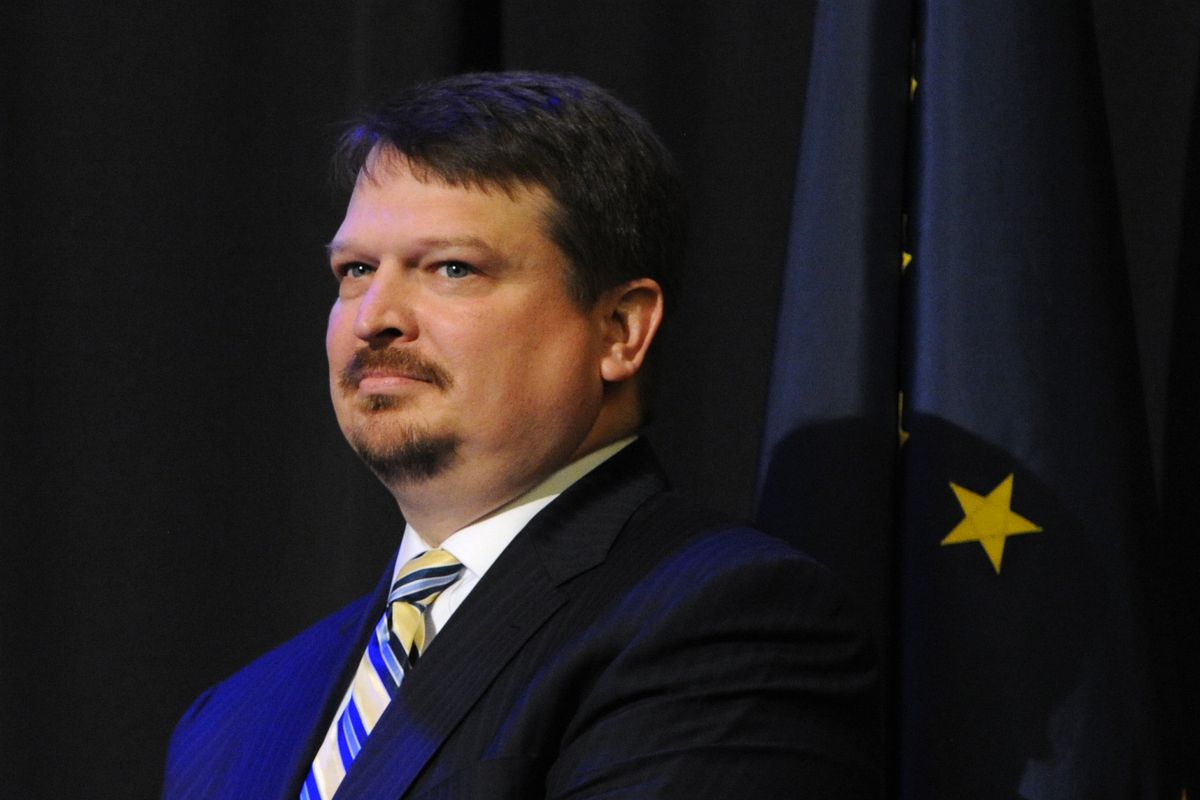 Joe Balash, Assistant Secretary for Land and Minerals Management, U.S. Dept. of the Interior spoke during the AFN Convention in the Dena'ina Center on Thursday, Oct. 18, 2018. (Bill Roth / ADN)

Joe Balash, Assistant Secretary for Land and Minerals Management, U.S. Dept. of the Interior spoke during the AFN Convention in the Dena'ina Center on Thursday, Oct. 18, 2018. (Bill Roth / ADN)

A key figure in the Trump Administration’s effort to expand oil drilling on federal lands has left his government position to work for an oil company with a major project near federal lands in Alaska, a transition questioned by watchdog and conservation groups as unethical.

On Wednesday, Balash said he will soon join Oil Search as its senior vice president of external affairs. The Papua New Guinea company is seeking to develop the large Pikka project, located on state lands near the National Petroleum Reserve-Alaska. The news was first reported by The Washington Post.

“Financially, I needed to make a change,” Balash said on Wednesday. His oldest is a high school senior and Balash would like to help him pay for college, he said.

The $155,000-a-year salary at Interior wasn’t enough for his family of four living near costly Washington, D.C., he said. The new job will pay more than the Interior position. Balash declined to specify an amount.

Balash dismissed questions, raised by watchdog groups in the Post’s article, that his move could violate ethics laws. He said there was no “nexus” between the work he was doing at Interior and Oil Search’s project.

Balash said Oil Search occasionally notified him of progress on Pikka last year, though it didn’t need to.

The company reached out to him in May, asking if he’d be interested in working there. That led to multiple conversations. Balash said he notified Interior’s ethics office about the discussions. He said nothing required a recusal from his duties.

Oil Search offered him a job at the end of July, Balash said. He said he expects to start there around the week of Sept. 23, living in Anchorage.

Balash, from North Pole, said the more than two-hour commute was too long. “I love the work I’ve done in D.C., but I have not loved living there,” he said.

Balash said he would follow Trump’s ethics order, not lobbying his former agency for five years, though he said he would oversee people that might be in such a position.

Lena Moffitt, with the Sierra Club, said the move reeks of corruption in the Trump administration.

“Throughout his time at Interior, Joe Balash spearheaded efforts to suppress science, ignore indigenous rights, and sell off the Arctic Refuge for drilling at all cost," she said. “Now he’s shamelessly seeking to profit from this destruction while the American people and our public lands pay the price.”

Keiran Wulff, president of Oil Search Alaska, praised Balash in a statement, saying he was hired following “a comprehensive search.”

“Joe is a proud Alaskan and brings significant regulatory and external affairs experience to Oil Search, a company relatively new to operating in the United States,” Wulff said.

Balash, 44, served as natural resource commissioner under previous Gov. Sean Parnell and as chief of staff to Sen. Dan Sullivan before Trump named him to the Interior post in July 2017.

Wulff said the company is eager to hire Balash.

“We are excited by the opportunities in Alaska and committed to working with stakeholders in a collaborative manner," Wulff said. “We are looking forward to adding Joe to the team of exceptional professionals already in place to deliver the Pikka development project safely and efficiently for the benefit of the local communities, the state of Alaska and all our stakeholders.”

In his post, Balash took steps to expand leasing opportunities for oil companies in NPRA and, as required by Congress, to open up federal leasing in ANWR for the first time. The Bureau of Land Management expects to release a final plan for ANWR leasing in the coming days, and has proposed holding the lease sale by year’s end.

Amy Burnett, a spokeswoman with Oil Search, said the company has no plans to explore in ANWR.

The company holds a stake in a dozen leases in eastern NPRA, but is not focused on pursuing activity there, she said. That section of NPRA has for years been on the table for possible development.

Balash said he didn’t suppress science, and took steps that left both industry and conservation groups unhappy. He shared a stage with Wulff at a trade group’s meeting in Anchorage in June, but they spoke on different subjects. Wulff focused on Pikka and Balash talked about resource development broadly.

Balash said he had no oversight of the U.S. Army Corps, the federal agency that approved the Pikka development plan in May.

“I stuck to the course in what was overall in the public interest and public good, and that was largely informed” by views from Alaska Natives from the North Slope, he said.

Balash said he hopes his work with Oil Search helps lead to oil production. Pikka could produce more than 120,000 barrels of oil daily, which would create jobs and boost Alaska revenue.

“That would be a huge contribution to Alaska," he said.