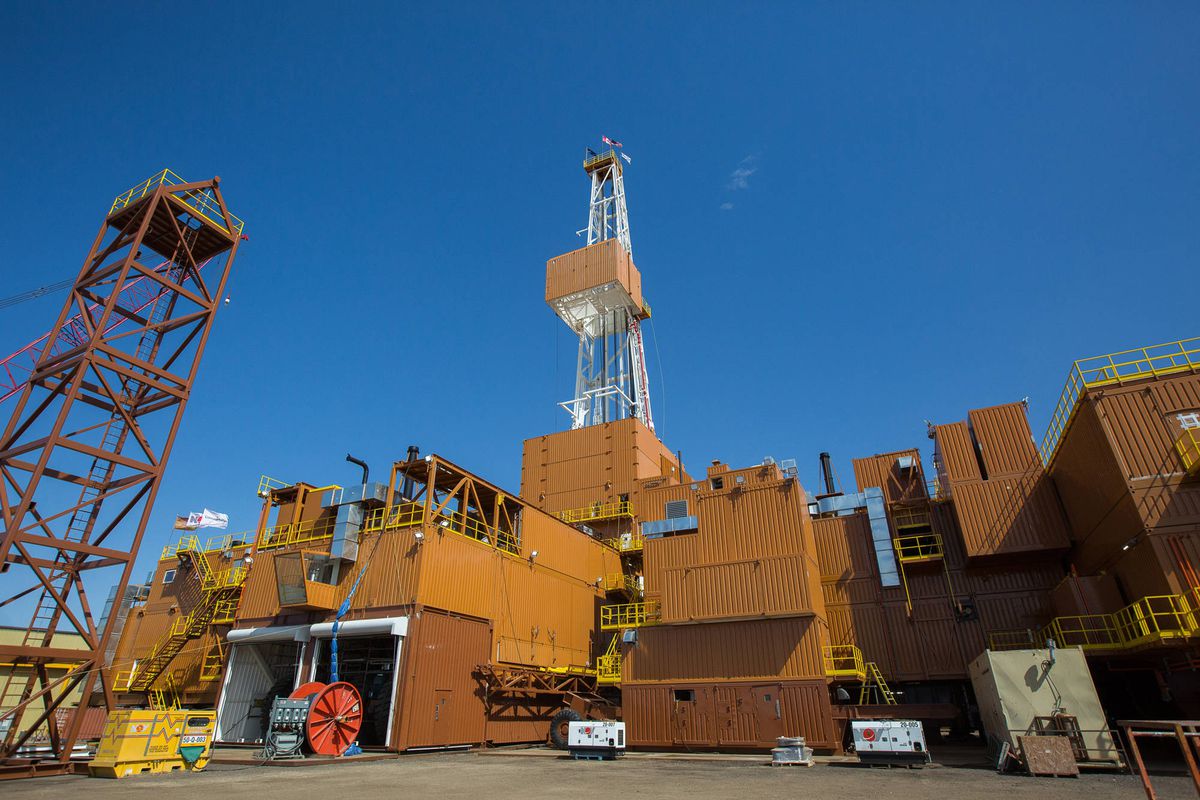 Doyon Drilling Rig 26, the largest mobile drilling rig in North America, was on its way through Canada to the North Slope in September. ConocoPhillips contracted with the Interior Alaska Native corporation in 2016 to construct the rig, which will start drilling on the North Slope next spring. (Courtesy ConocoPhillips)

Doyon Drilling Rig 26, the largest mobile drilling rig in North America, was on its way through Canada to the North Slope in September. ConocoPhillips contracted with the Interior Alaska Native corporation in 2016 to construct the rig, which will start drilling on the North Slope next spring. (Courtesy ConocoPhillips)

While the drilling will slightly delay one of its prized projects, the Houston-based major is also jumpstarting a recently acquired stalled Slope development.

ConocoPhillips Alaska Vice President Scott Jepsen said to during a Sept. 12 presentation to the Alaska Support Industry Alliance trade group that the wells will be focused on the prospective Harpoon area southwest of its existing NPR-A projects and better delineating the large Willow prospect.

“We want to get more confidence around the geology and reservoir characteristics of the field, so that’s one of the reasons we pushed back our startup date to around 2025-2026 now for the Willow development,” Jepsen said.

ConocoPhillips announced the Willow discovery in early 2017 and has steadily advanced it since. The company estimates it could produce 130,000 barrels per day at its peak.

It will additionally be shooting 3-D seismic data south of Oil Search’s Pikka Unit around the Putu prospect near the village of Nuiqsut.

The work will require roughly 165 miles of ice roads, according to Jepsen.

“Hopefully the weather will cooperate and we’ll be able to accomplish all this,” he said.

ConocoPhillips also announced in June it had purchased the Nuna project from Dallas-based independent Caelus Energy.

Caelus held the estimated $1.5 billion oil prospect for years but did not develop it beyond a gravel pad in part because of lower-than-expected tax credit refunds from the state. When Caelus sanctioned Nuna in March 2105 the company indicated in a letter to Department of Natural Resources officials that it had authorized $480 million of expenditures on the project to that point.

ConocoPhillips North America and Europe President Michael Hatfield during a July 30 conference call the referred to Nuna as “$100 million for 100 million barrels.”

According to Jepsen, Nuna has been made part of the Kuparuk River Unit and its oil — Caelus estimated up to 20,000 barrels per day — will be processed through Kuparuk facilities, significantly lowering development cost.

Drilling will be done from the Nuna pad and a Kuparuk pad to minimize new infrastructure costs, Jepsen said.

The company expects 400 laborers over one winter construction season will be able to prep the project for first production, with is expected in 2022.

Finally, the largest mobile drilling rig in North America, which ConocoPhillips contracted with Doyon Drilling for in 2016, the Doyon 26, is on its way through Canada to the North Slope, Jepsen said.

“We call it the beast and it’s going to be a beast,” Jepsen said.

The extended reach drilling rig will enable the company to develop the Fiord West pool from an Alpine drill site, which could generate up to 20,000 barrels per day, he added. It’s scheduled to start drilling next spring.