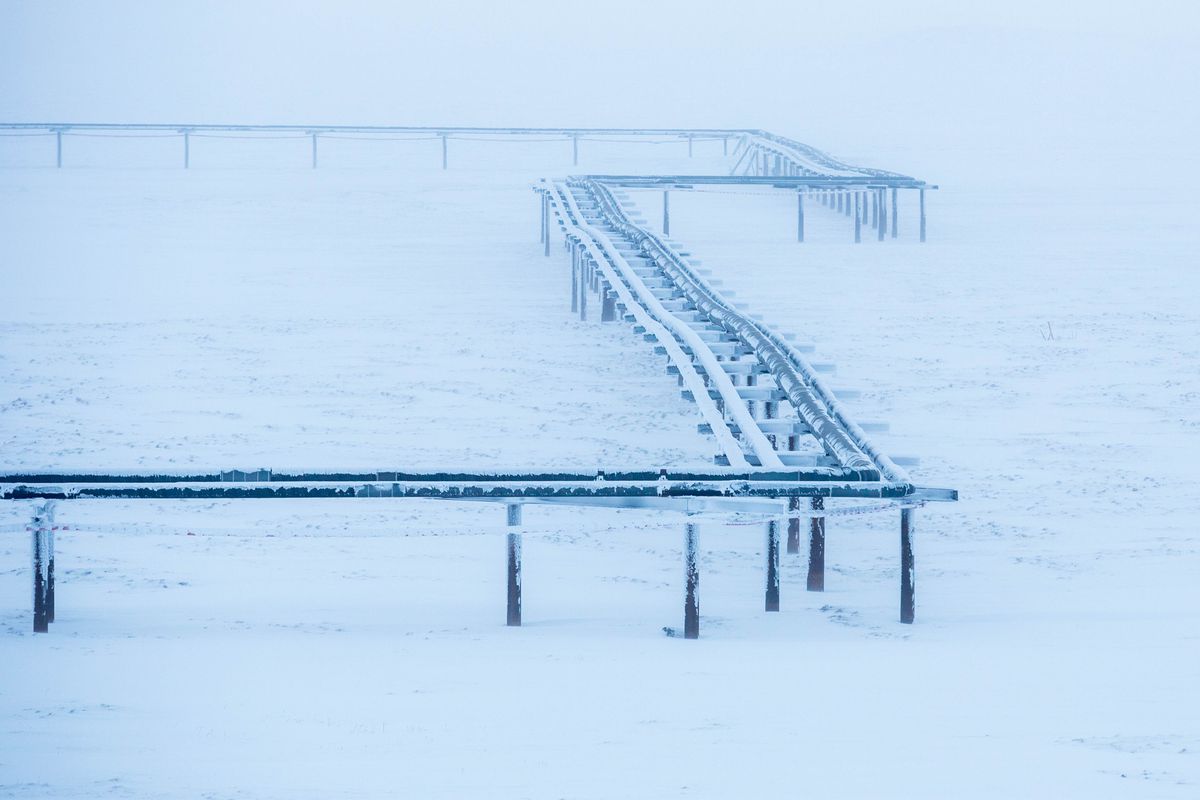 Pipes leaving from ConocoPhillips' CD5 drill site on Tuesday, Feb. 9, 2016. CD5 is the first drill site on Native-owned land within the boundaries of the National Petroleum Reserve-Alaska, and infrastructure supporting CD5 paves the way for future development within the reserve.

Pipes leaving from ConocoPhillips' CD5 drill site on Tuesday, Feb. 9, 2016. CD5 is the first drill site on Native-owned land within the boundaries of the National Petroleum Reserve-Alaska, and infrastructure supporting CD5 paves the way for future development within the reserve.

But conservation groups called the proposed changes to the rules surrounding the nation’s landmark environmental law a grave threat to Alaska’s environment.

The changes would affect regulations surrounding the National Environmental Policy Act, the law that has triggered environmental reviews for many of Alaska’s biggest projects and project proposals, including the Pebble mine and oil exploration in the Arctic National Wildlife Refuge.

Conservation groups say the law is critical to keeping the state’s air and water clean, while industry groups and Alaska’s politicians, including the state’s congressional delegation, frequently complain it is too burdensome.

Sen. Lisa Murkowski, R-Alaska, said Thursday that the president and his advisers “deserve credit for leading the charge” to update the 1970s-era permitting procedures associated with the act.

“While I am still reviewing the details of this proposal, antiquated federal regulations often stand in the way of critical infrastructure and other important projects that can create jobs, improve our standard of living and energy security, and yet still fully protect the environment,” she said in a statement.

Flanked by workers in hard hats, the president on Thursday unveiled his plans to update the rules associated with the law, which was created 50 years ago.

Republican Gov. Mike Dunleavy thanked Trump in a tweet for the proposed changes.

“Your efforts will lift bureaucracy on projects of all types, allowing construction projects to move forward, and create a more prosperous Alaska for all,” Dunleavy said.

Thank you, @realDonaldTrump, for working to modernize the 40-year-old NEPA regulations. Your efforts will lift bureaucracy on projects of all types, allowing construction projects to move forward, and create a more prosperous Alaska for all. #NEPAModernization https://t.co/kIEbR0ND1A

The changes, introduced by the White House Council on Environmental Quality, include establishing a two-year time limit to complete environmental impact statements, the comprehensive reviews of a project’s potential impacts. Less rigorous environmental assessments will be limited to one year. The changes also set page limits on the assessments and promote information sharing between agencies, among other changes, according to a White House summary.

Conservation groups in Alaska condemned the plan. The proposal will narrow the scope of comments that will be considered in environmental reviews and will tighten the range of federal projects triggering reviews, said Elisabeth Balster Dabney, executive director of the Northern Alaska Environmental Center in Fairbanks.

She called it “horrific."

“Our organization is still reviewing the 194-page regulation change, but already we can see this administration’s goal is to open America’s already threatened landscapes as fast as possible with complete disregard for long-lasting impacts,” she said. “These changes could result in cutting the public out of the process to comment on projects that will directly impact them.”

Conservation groups said the proposal would remove consideration of “cumulative” impacts from projects, limiting consideration of how a project, such as an oil field that produces for decades, will impact the climate.

“This proposal would put Alaska public lands, which we count on for hunting, fish and recreation, more in the hands of outside private interests,” said Andy Moderow, state director for the Alaska Wilderness League.

The proposal, if approved, could result in less environmental safeguards for Alaska projects, including for oil drilling in the Arctic National Wildlife Refuge, Moderow said.

“This proposal isn’t a surprise coming from this administration,” he said. “They’re trying to do things faster for industry while ignoring our changing climate in Alaska that’s warming twice as fast as the rest of the country.”

“Because of our broken public works and environmental approval process, our country’s infrastructure is in serious disrepair,” he said. “Reform is desperately needed and I applaud the Trump administration’s proposed rule to modernize our NEPA regulations to provide more certainty and consistency during the permitting process."

“Today’s NEPA modernization announcement by President Trump is further proof of his commitment to reducing bureaucracy and creating an efficient, streamlined permitting process for projects in Alaska and across the country," Young said. "I applaud him for taking this action and look forward to our continued work together on behalf of our state.”

The proposal is available for public comment until March 10.