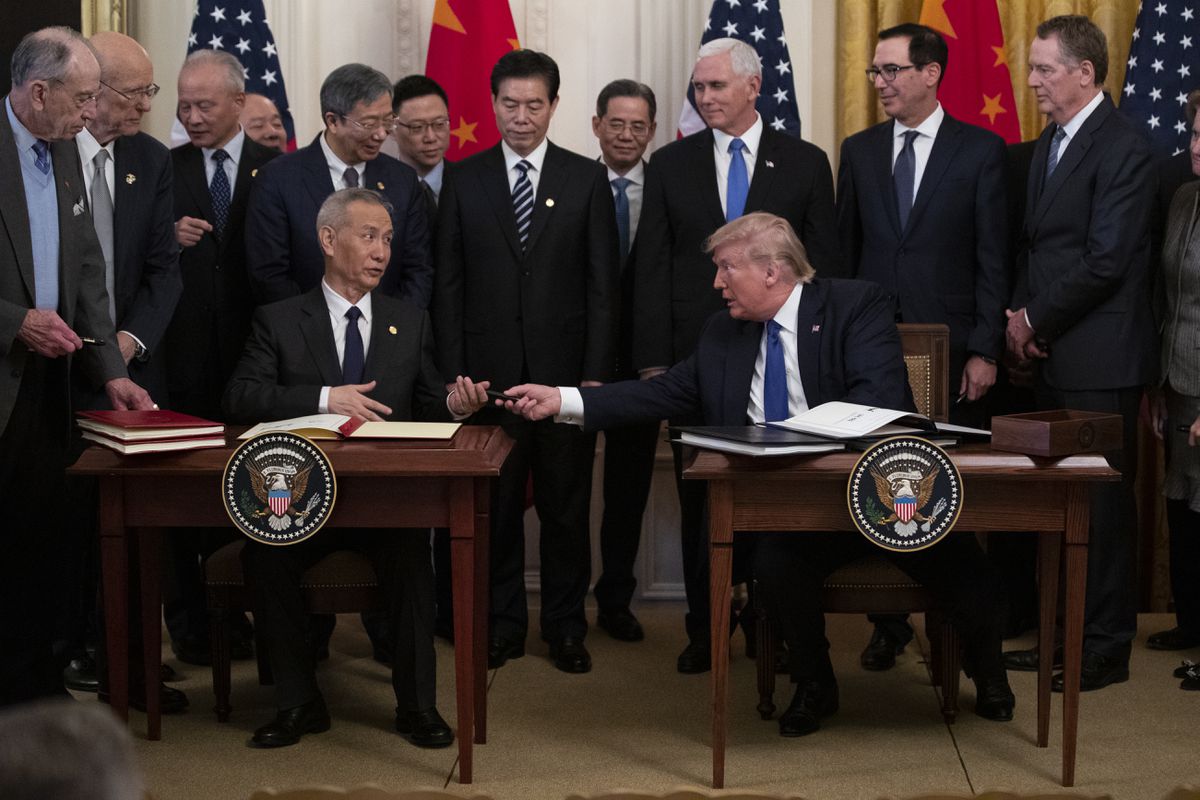 In this Jan. 15, 2020, photo, President Donald Trump hands a pen to Chinese Vice Premier Liu He after signing "phase one" of a US China trade agreement, in the East Room of the White House in Washington. (AP Photo/ Evan Vucci)

In this Jan. 15, 2020, photo, President Donald Trump hands a pen to Chinese Vice Premier Liu He after signing "phase one" of a US China trade agreement, in the East Room of the White House in Washington. (AP Photo/ Evan Vucci)

Though China’s commitment to buy a lot more U.S. oil, liquefied natural gas and coal over the next two years supplied political headlines for the first-phase trade deal between the two countries, analysts generally dismissed the spending numbers — an average of almost $720 million per day — as unlikely to be achievable.

To meet the deal’s proclaimed goal of buying an additional $52.4 billion of U.S. energy in 2020-21, China would have to more than double its best months ever of U.S. crude, LNG and coal imports to reach the 2020 commitment of $18.5 billion and then almost double them again to hit the pledge of $33.9 billion in 2021.

“The more you delve into China’s commitment to buy an additional $52.4 billion in U.S. energy over the next two years, the more it becomes apparent the goal is unachievable,” Reuters financial writer Clyde Russell said in a Jan. 20 opinion piece.

If China were to buy enough U.S. oil to even approach the political commitment — perhaps more than 1 million barrels per day, more than double its biggest month ever — it would have to stop buying most of the light crude it gets from other countries, several analysts noted.

And for a lot of China’s refineries, the light crude coming from U.S. shale oil plays is the wrong kind of oil; the refineries are optimized to process heavy, sour grades, such as those from the Middle East.

“Not only would this disrupt global trade flows and relationships, it also raises the question as to whether Chinese refiners, and U.S. crude exporters, would want to become so reliant on each other, rather than having a diverse range of trading partners,” said Russell, with a quarter-century as a financial journalist.

If China did reach 1 million barrels per day of U.S. crude, that would equate to about 25 percent of all U.S. oil exports the past two months.

“Would they simply roll over, or, more likely, try to protect their market share while going after U.S. customers outside of China?” Russell said in a commentary on Jan. 15, the day of the trade deal.

“I know it’s stating the obvious, but $52.4 billion buys a lot of energy (equivalent to around 900 million barrels of crude oil at today’s prices),” Gavin Thompson, vice chairman for Asia-Pacific energy at global consultancy Wood Mackenzie, said in a Jan. 21 commentary posted on the company’s website. “And this is in addition to the $8.4 billion China spent on U.S. energy in 2017.”

“China’s continuing radio silence on any future tariff removal for U.S. energy imports remains the most obvious,” he said. “Given these challenges, it’s likely that the reality of China’s purchases of U.S. energy will fall some way short over the next two years.”

Though U.S. LNG production is growing, much of the capacity is already under contract and new projects cannot be built in time to meet the 2020-21 goals.

“It just isn’t a good fit to presume that the phase one deal is a big win for LNG,” said energy analyst Katie Bays, co-founder of research and consulting firm Sandhill Strategy, as quoted by S&P Global Platts on Jan. 21.

“The real bogey for the U.S. on the LNG side is if the trade deal somehow led to new contracts with LNG developers,” said the Washington, D.C.-based Bays.

A real breakthrough would depend on “a comprehensive deal, removal of tariffs and some indication that the Chinese would be willing to make a long-term bet on the United States,” Nikos Tsafos, a senior fellow at the Center for Strategic and International Studies in Washington, D.C.

“At the end of the day, it is not like this is a big breakthrough for U.S. LNG exports or exporters or project developers,” Tsafos was quoted by S&P Global Platts on Jan. 21.

Then there is the matter of trust.

“After you started the trade war, you then need to convince the Chinese that you are a reliable long-term supplier on whom they have to base their energy security,” Tsafos said.

No U.S. LNG has been delivered to China since March 2019, and long-term contracting between Chinese buyers and U.S. LNG developers has stalled. Several projects are holding off on final investment decisions until they can sign up enough customers.

Meanwhile, spot-market prices for LNG delivered in Asia have fallen to less than $4 per million this month, and U.S. LNG just isn’t nearly as competitive as it was a year ago when the market was quoting $8 to $9.

Even if China’s 25 percent tariff is removed, U.S. LNG would still be about $1.50 to $2.50 per million Btu more expensive than other available cargoes, analysts and traders said, Reuters reported a day after the U.S.-China trade deal.

As long as U.S. gas is more expensive, importers would have to absorb the cost or pass it on to consumers, which could make Chinese state oil companies reluctant to commit to large-scale purchases, Wood Mackenzie’s Thompson said. Importers already lose billions of dollars per year on imported gas that costs more than the government allows them to charge their customers.

All of which means the government will need “to remove, reduce or approve tariff exemptions before incremental LNG imports from the U.S. can be meaningful,” Jenny Yang, director of IHS Markit’s Greater China Gas, Power, and Energy Future Division, told Reuters.

For LNG to cover one-quarter of the commitment for energy buys in 2020, China would have to take an average of one fully loaded LNG carrier every day. Analysts with energy consulting firm ClearView Energy Partners called that number “staggering.”

China’s biggest month for U.S. LNG imports was January 2018, before the trade war escalated, when it took about seven cargoes all month.