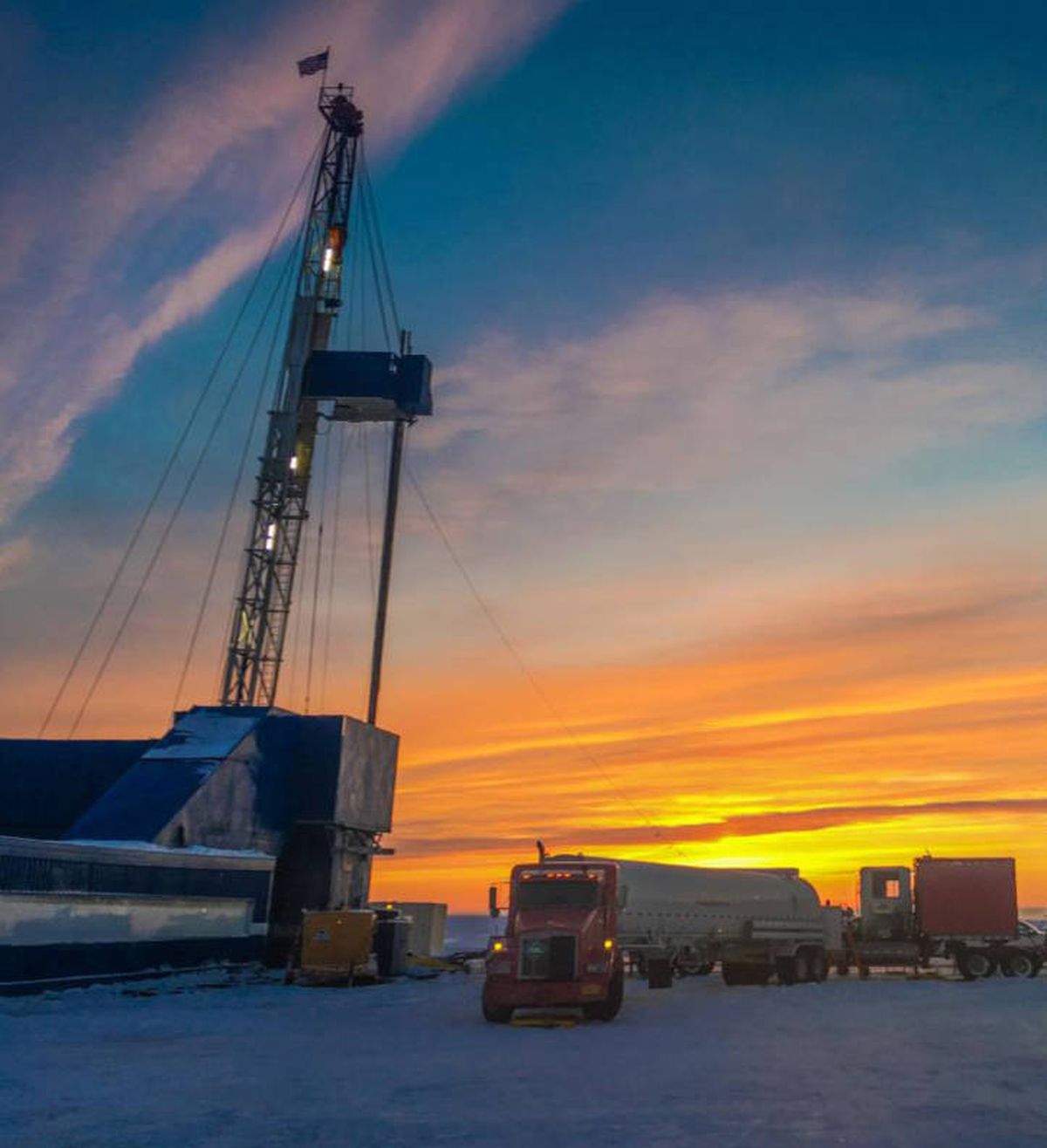 A drill rig is seen working at the Alkaid-1 well operated by London-based Pantheon. The company believes it can access the prospect directly from a turnout on the Dalton Highway and may even be able to eventually send oil directly into the Trans-Alaska Pipeline System from the location about 20 miles south of Pump Station 1. (Pantheon Resources)

A drill rig is seen working at the Alkaid-1 well operated by London-based Pantheon. The company believes it can access the prospect directly from a turnout on the Dalton Highway and may even be able to eventually send oil directly into the Trans-Alaska Pipeline System from the location about 20 miles south of Pump Station 1. (Pantheon Resources)

A new British entrant to the North Slope plans to finish a unique oil project started years ago by a small Anchorage explorer.

In an interview with the Journal, London-based Pantheon Resources executives said they expect to produce up to 30,000 barrels of oil per day from the Greater Alkaid prospect discovered in 2015 by Great Bear Petroleum.

CEO Jay Cheatham said the Greater Alkaid prospect is particularly promising in large part due to its location: a little more than 20 miles south of Prudhoe Bay and directly adjacent to the Dalton Highway.

“We’ll be drilling from a pad that’s right next to the Haul Road. All of our competitors on the North Slope literally have to spend billions of dollars to get to first oil,” Cheatham said, adding that won’t be the case for Pantheon.

He and Pantheon Technical Director Bob Rosenthal stressed the location not only precludes the need for expensive infrastructure and logistics to reach the prospect, but it also allows for year-round development.

Pantheon will literally be drilling “underneath the Dalton Highway and the (Trans-Alaska) Pipeline, or TAPS, which means we can get on production faster than anybody else,” said Rosenthal, a former Great Bear manager. “The idea is to build a pad next to the highway and drill long, horizontal multi-stage fracked wells and put this into production as soon as we can.”

Company representatives are in discussions with state officials regarding the viability of expanding a gravel turnout on the highway to serve as the company’s drilling and production pad, according to Cheatham.

Great Bear first started working the area in 2012 and drilled several wells targeting unconventional shale plays but the company decided to drill the conventional Alkaid-1 well into the Brookian geologic sequence when the prospect “popped up” in 3-D seismic data at its fortuitous location, according to Rosenthal.

The large Nanushuk and Torok formation oil discoveries made by several companies working farther north and west on the Slope in recent years are also zones of the Brookian sequence, but they are older than what Pantheon is targeting, Rosenthal said.

“You can get similar porosity and similar permeability,” he said of the Brookian plays. “It keeps stepping across the slope — stepping west to east.”

He added that Pantheon’s target zone is about 8,000 feet deep.

Rosenthal’s description of the geology is generally in line with what state geologists have said about the Brookian sequence in prior interviews with the Journal.

Cheatham said Great Bear spent upwards of $200 million exploring the area but had to suspend the Alkaid-1 well when the Sagavanirktok River — which the pipeline and highway parallel — overflowed and flooded in the spring of 2015.

Pantheon reentered the Alkaid well last spring and it flowed approximately 100 barrels per day from a six-foot interval of a larger, 450-foot likely oil-bearing column, according to Cheatham.

This year, the company plans to drill one or two more Alkaid wells and initiate a long-term production test that should allow the company to move its contingent recoverable resource estimate of 76 million barrels to the reserve category, which is a seemingly small but significant shift for oil developers, Cheatham said.

He and Rosenthal emphasized a belief that the additional drilling will also allow the company to add to its resource totals. As it stands, they said an independent assessment gave the Greater Alkaid prospect a net present value of $595 million, or about $8.50 per barrel, with an industry standard 10 percent annual discount rate.

The pair declined to specify a timeline for commercial production from Alkaid, but Rosenthal said they hope to start producing “as quickly as we can possibly do the job.”

If and when that occurs, Cheatham said Pantheon is likely to install temporary modular production facilities at the drill site and start by trucking the oil about 20 miles north to TAPS Pump Station 1. As the field is developed and permanent facilities are installed, he said Pantheon could eventually put its oil into the pipeline on site.

“It’s an open-access pipeline so we have talked to people about being able to tap into the Trans-Alaska Pipeline System right there,” Cheatham said. “There’s a potential to do a hot tap into the line.”

Company leaders also eventually plan to drill their Talitha prospect to the southwest of Alkaid, which is on the roughly 200,000 acres of state leases the company holds in the area and they believe holds several billion barrels of oil.

“(Talitha) is a very large accumulation that we see there keyed off of an old well drilled by my former company, ARCO, in 1998 called the Pipeline State-1 well,” Cheatham said.

Pantheon’s Talitha targets are in Brookian and Kuparuk formations, according to a company investor presentation.