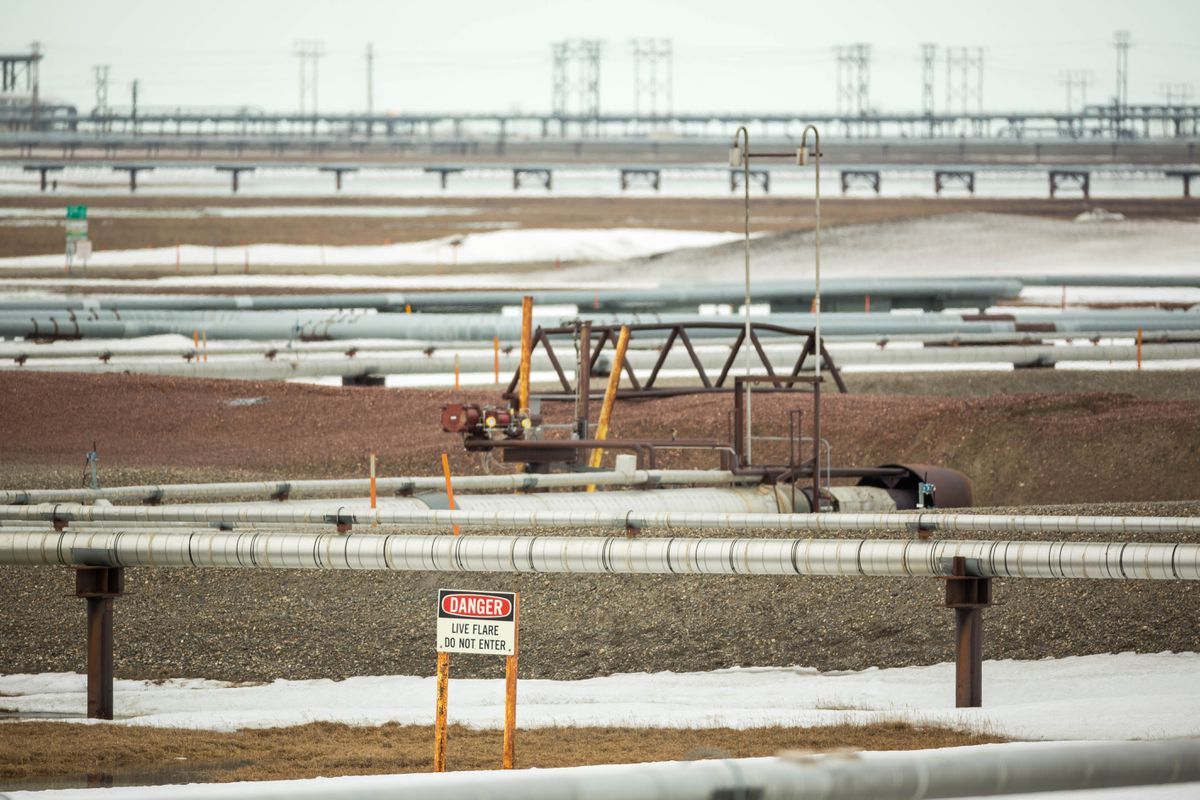 Alaska and its oil industry could benefit from a conservative-driven plan to address climate change, according to backers of the proposal.

Catrina Rorke, a vice president with the Washington, D.C.-based Climate Leadership Council, said Alaska’s oil and gas production is are “really carbon cheap” when compared against hydrocarbons produced in other major basins around the world and is therefore desirable under the carbon fee-and-dividend plan the nonprofit council supports.

“You use the fewest resources to produce oil and gas in the state of Alaska; fewer than the Lower 48 and certainly fewer than the global average,” Rorke told a lunch gathering of the Alaska-based public policy group Commonwealth North Feb. 5.

Members of the Climate Leadership Council and Americans for Carbon Dividends were in Alaska to pitch the “Baker-Schultz” carbon fee-and-dividend plan to state business and policy leaders.

At its core, the Baker-Schultz plan would put a $40 per ton fee on domestic carbon emissions, whether from burning petroleum fuels, industrial processes or other sources.

It is named after former Republican secretaries of state James Baker and George Schultz, who served under presidents George H.W. Bush and Ronald Reagan, respectively, and authored a report in 2017 that serves as a foundation for the plan.

The Climate Leadership Council lists some of the world’s largest energy companies as its founding members, including BP, ExxonMobil, Total and Shell.

It’s estimated the $40 per ton base fee administered by the federal government would generate upwards of $400 billion per year, according to Americans For Carbon Dividends Director and former Pennsylvania Republican Congressman Ryan Costello.

The fee would gradually increase over time to ensure emitters and carbon technology developers would continue to push for lower carbon solutions, Rorke added.

She also noted that the plan calls for exempting communities with unavoidably high energy costs from the fee, as is the case across much of rural Alaska.

That massive sum of money would then be redistributed back to every American in the form of an equal-share dividend regardless of how much carbon any one person is responsible for emitting. Costello and Rorke stressed that the dividend would allow Americans to decide and finance the best personal route to adopt a lower carbon lifestyle.

“The point of pushing (the money) right back into the American taxpayers’ pockets is that we don’t have a huge population of ideas on what we could alternatively do with those dollars,” Costello said, adding the base dividend would total about $2,000 per year for a family of four.

“Over time it’s going to favor energy that doesn’t emit carbon or companies engaged in carbon storage and trapping technologies.”

The groups believe the Baker-Schultz carbon fee-and-dividend would cut the country’s greenhouse gas emissions by 50 percent from 2005 levels by 2035 if it were enacted quickly, which would be a greater reduction than the Paris Climate Accord goals.

The Climate Leadership Council projects about 80 percent of Americans would receive more money back in dividends than they would spend in costs added to goods and services as a result of the carbon fee as high-income individuals are also generally the largest individual carbon users.

That’s where Alaska could realize an upside, according to Rorke.

Because it’s unlikely that oil and gas production will ever totally disappear, it would be beneficial to produce hydrocarbons efficiently, which Alaska does for a number of reasons, she said.

For starters, the state prohibits flaring of natural gas except in emergency situations — partly a result of the gas being a commonly held resource — and Alaska’s traditionally large, conventional oil and gas pools demand less resources to develop when compared to Lower 48 shale development that requires near constant drilling to maintain production.

The Baker-Schultz plan also calls for a repeal of federal carbon regulations to allow businesses the ability to plan for the dividend, which would be the nation’s primary climate change policy, supporters say.

Costello said the regulatory limit is key to gaining bipartisan support for the plan.

“If we can build a political movement from the center out you can create a nucleus of smart, thoughtful bipartisan elected officials from the Democrat and Republican parties to center an energy policy that can address the climate issue,” he said, stressing that the centrist-based movement wouldn’t allow fringe climate change-denying conservatives or progressives who demand extreme actions to scuttle the plan.

To keep American companies competitive, the plan also calls for the fee to be put on imported goods and lifted from American exports, Rorke added.

“It puts the carbon fee on a domestic basis. It lets other countries deal with climate change the way they see fit and it establishes the U.S. on a level playing field,” she said.

With the U.S. leading the way, the idea is that other countries would follow suit with their own carbon fees.

The groups are touring the country to drum up support for the plan before attempting to get enacting legislation through Congress.

“It’s the most comprehensive, effective climate change policy out there,” Costello professed.