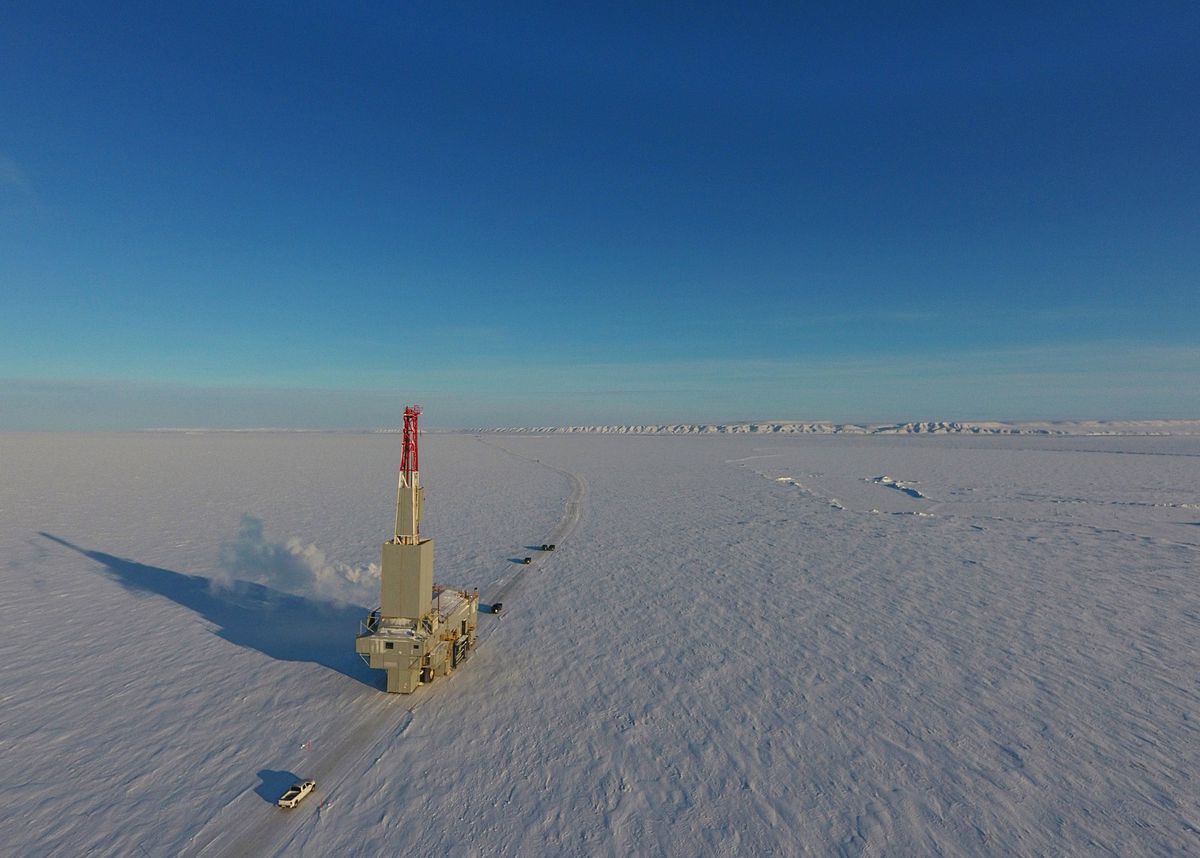 A massive drilling rig on wheels shut down the Dalton Highway for much of the weekend as it inched toward an Alaska oil prospect on the North Slope.

“It’s the first and probably the last time this happens,” said Greg Miller with Cruz Construction, an oil field support company involved in the project.

Other large drilling rigs have traveled down the two-lane gravel highway. But they were hauled in pieces for later assembly, he said.

The Nordic-Calista Rig No. 3 was fully assembled and ready to be driven to the job site from Deadhorse. Deadhorse is the industrial hub for the Prudhoe Bay oil fields.

The decision to drive it down the road saved time, said Udo Cassee, general manager for Nordic-Calista.

The rig is now on site and set to drill an exploration well at the Icewine project south of Prudhoe Bay, owned by Accumulate Energy Alaska. The location is unusual because it’s accessible by a public thoroughfare, unlike oil fields to the north where the oil companies control access.

The rig weighs 2.7 million pounds, with a derrick 10 stories off the ground.

It took up both lanes of the Dalton, reaching a top speed of 1.8 mph, Cassee said.

“That’s fast enough for a drilling rig of this size,” he said.

The weekend drive started at 4 a.m. Saturday. The roughly 30-mile trip along the Dalton lasted about 28 hours.

That was followed by another roughly 30-mile crawl along a temporary ice road cut across the frozen tundra.

The Alaska Department of Transportation and Public Facilities on Friday announced highway closures and delays. Truckers hauling oilfield supplies had chances to slip by at pullouts. The Dalton closed for about 10 hours at one point.

“As far as I know, we’ve never done anything like that, where you have to close the road because there’s no way to get around it," DOT spokeswoman Meadow Bailey said.

“Intense logistics” got the rig safely to the site, said Stephen Nowers with Cruz Construction.

Forklifts laid giant wooden and steel platforms in the rig’s path so culverts weren’t crushed. Crews on foot temporarily removed 1,500 roadside markers in 30-below temperatures so they weren’t struck.

On the ice road, the rig looked like an “ice ship” gliding over a white ocean, Nowers said.

The rig is expected to return by road to Deadhorse in April. Plans to begin paving part of the Dalton this summer mean the round trip could be the last time a giant drilling rig goes for a drive down the highway, Miller said. During the journey to the site, the frozen gravel highway didn’t flex under the drilling rig’s weight.

"But pavement gets so brittle when it’s cold, you couldn’t do that,” he said.

“Time to get to work,” Cassee said.

Editor’s note: This story has been updated to clarify that the rig will return by road to Deadhorse in April.