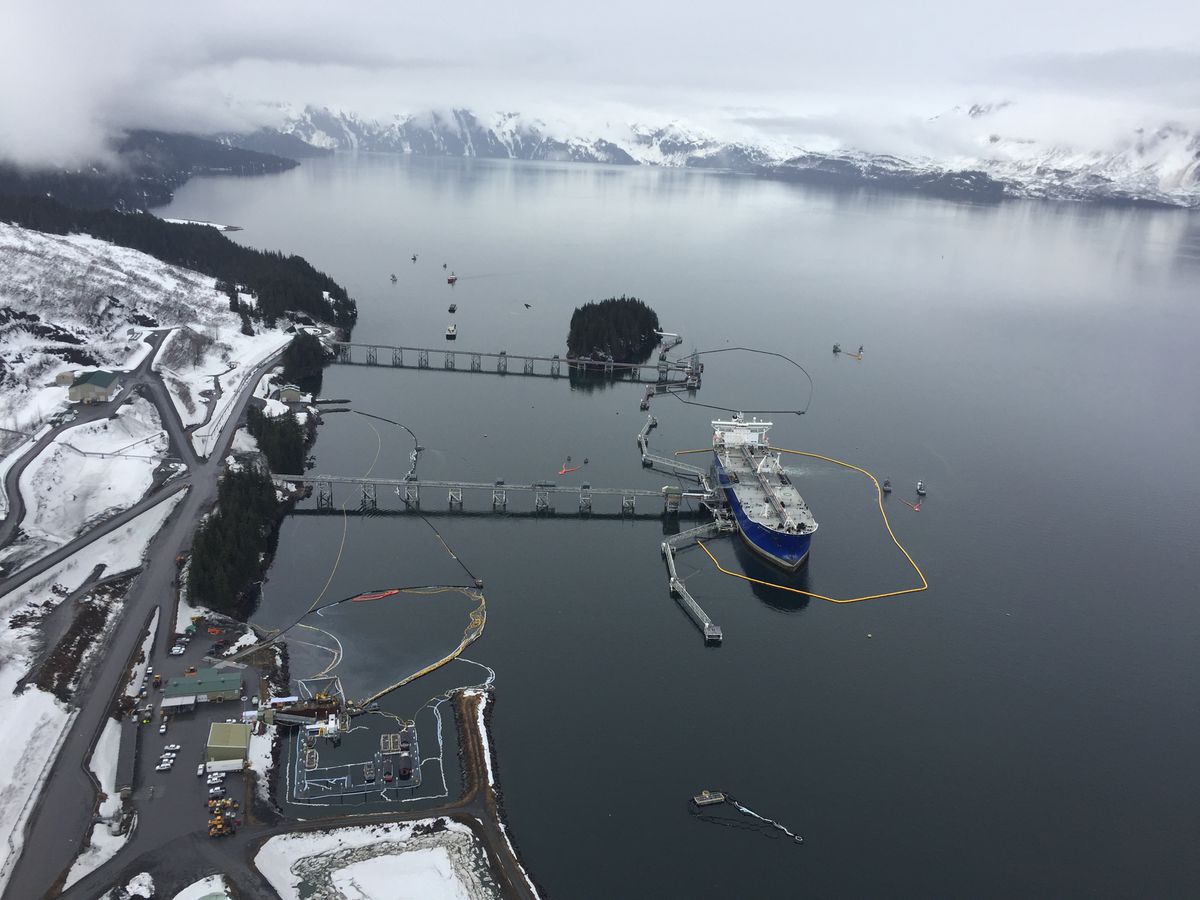 A succession of mechanical failures led to the persistent spill of oily water in Port Valdez that lasted close to two weeks.

The amount that spilled is relatively small: Crews had recovered 14 barrels of oil from a contained area on the water near a small boat harbor at the Valdez Marine Terminal, the incident management team reported Friday evening.

More than 240 people are involved in the response. The spill was discovered on April 12. The exact amount of oil that spilled is unknown.

Boats with water-floating booms have corralled the oil into an increasingly smaller footprint on the water. The leak as of Friday was being captured by a series of newly installed tanks installed on the shore before it enters the water, the team said.

“The outflow is currently discharging high volumes of snow melt and rain water with a minor sheen being recovered from the tanks,” the team said.

Officials have praised the response by Alyeska Pipeline Service Co., the operator of the terminal where tankers are loaded with oil. But there are critical questions about why multiple systems failed to prevent the leak.

Usually, a single problem causes a spill, said Graham Wood, manager of the prevention, preparedness and response program with the Alaska Department of Environmental Conservation.

“It’s not common for a series of misfortunes" to be the cause, Wood said.

Though the origin of the spill is under investigation, efforts have been focused on the response, said Kate Dugan, an Alyeska employee representing the incident management team. The team consists of Alyeska, the Department of Environmental Conservation and the U.S. Coast Guard.

“We are still in the active response phase,” she said on Thursday. “Any day oil hits the land or water, it’s a bad day and we have to get after it."

The oily water flowing into Port Valdez drained out of a sump, or collection well, about a quarter-mile uphill from the water. The concrete structure extends about 16 feet underground. It collects rainwater and other runoff from an industrial area that includes diesel fuel tanks and a parking lot.

Responders quickly stopped the leak from the sump. But the oily water had already run downhill, beneath thick, heavy snow, at least some of it underground.

According to the state, North Slope crude oil somehow ended up in the well. It created a mix that is “not consistent with the runoff usually collected by the sump,” the incident team said.

A valve in the pipe near the sump failed to work. The pipe is part of a pipeline system that carries water from the sump as well as ballast water.

The valve is a check valve, a self-automated mechanism designed to allow liquid to flow in one direction, without backflowing.

Ballast water is carried in the holds of oil-laden tankers and other vessels to provide stability on the water.

The ballast water is also shipped through the pipe system to be processed and cleaned at a treatment facility, after it’s removed from tankers. In some cases, ballast water can contain oil, said Donna Schantz, head of a citizens’ spill oversight group in Prince William Sound.

Debris in the valve prevented it from fully closing, the incident team reported on Monday.

The failed valve "could have allowed oily water from the ballast water system to backflow into the sump,” the team said.

“Somehow backflow was able to enter the sump,” Dugan said. “We don’t know exactly where the oily water came from."

The next failure occurred as the level of oily water rose dangerously high. A pump should have engaged to deliver the liquid in the sump into the ballast water system, Dugan said.

A water-level indicator failed to activate the pump, she said.

Finally, an alarm also should have been triggered, notifying personnel at the operations control center, Dugan said.

“It failed to alert,” she said.

Wood, with the state, said the response is thorough and on track. He declined to discuss possible enforcement actions that may be taken in the future.

Excavation to find the flow of oily water down the hill has been complicated by a series of underground utility lines and other structures. Crews have used “air knives," or compressed air, to dig cautiously, the team said.

Schantz said heavy snow on the ground, making excavation harder, has added to the obstacles.

“They’ve been very proactive in addressing the spill,” she said. “It’s definitely a challenging situation.”