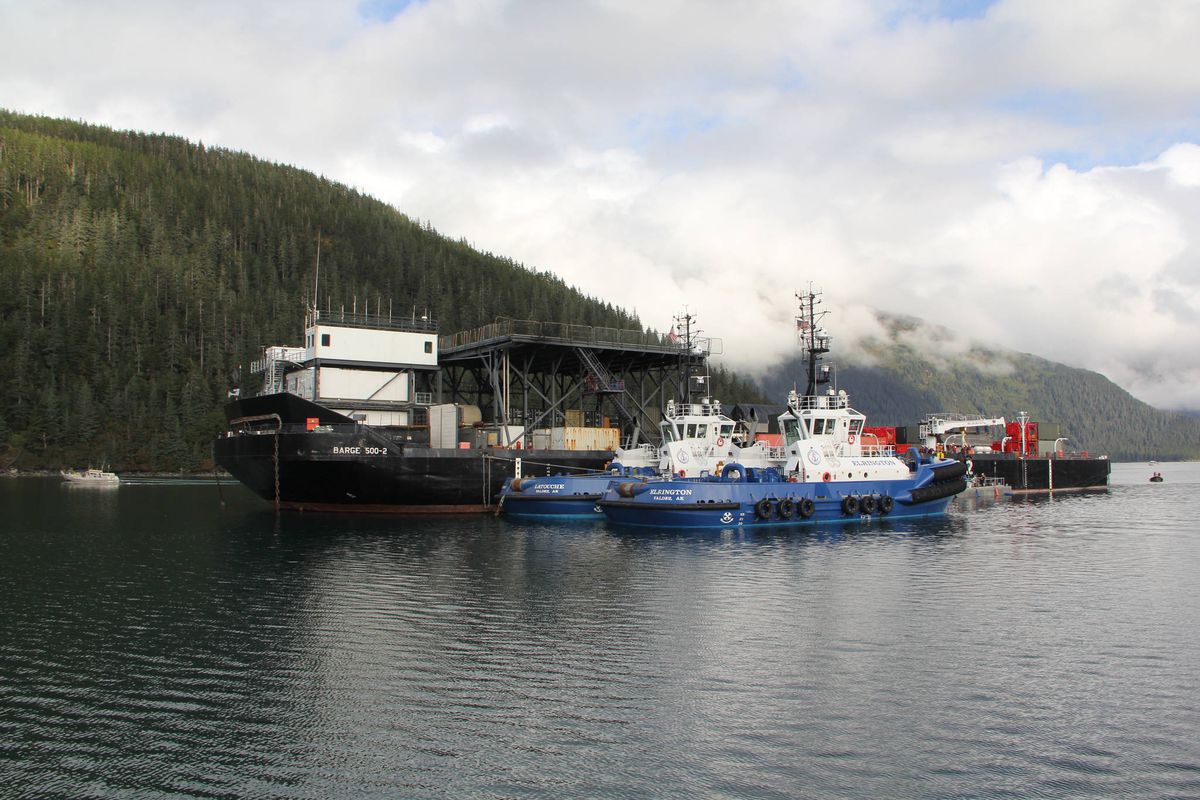 A spill response barge and two of the new escort tugs built and operated by Edison Chouest are seen in summer 2019 during a drill near Whittier in Prince William Sound. The state Spill Prevention and Response Fund is experiencing a revenue shortfall that must be addressed through additional revenue or a general fund appropriation, according to the Department of Environmental Conservation. (Elwood Brehmer / Alaska Journal of Commerce)

A spill response barge and two of the new escort tugs built and operated by Edison Chouest are seen in summer 2019 during a drill near Whittier in Prince William Sound. The state Spill Prevention and Response Fund is experiencing a revenue shortfall that must be addressed through additional revenue or a general fund appropriation, according to the Department of Environmental Conservation. (Elwood Brehmer / Alaska Journal of Commerce)

State environmental regulators are seeking more money for Alaska’s spill response fund amid a comprehensive review of the requirements for petroleum producers and shippers.

Department of Environmental Conservation Commissioner Jason Brune said during a Sept. 18 meeting of the Prince William Sound Citizens' Regional Advisory Committee that he is advocating for the Dunleavy administration and Legislature to commit more funding to the state’s shrinking Spill Prevention and Response fund.

The conclusion that the SPAR fund needs additional help — most likely through a general fund appropriation — comes as the state is facing a fiscal year 2022 budget deficit of roughly $2 billion.

It also goes against the grain for an administration that has pushed for often deep spending cuts across state government to erase the state’s ongoing deficits and finance paying larger Permanent Fund dividends without additional taxes.

Brune acknowledged the challenges inherent in asking for more money given the state’s fiscal situation but said the need for a robust SPAR fund necessitates it. He said seven positions were cut last year from the SPAR team of more than 100.

“It remains a priority of mine to bring sufficient funding to SPAR,” he said to the council board.

“It’s going to be a heavy lift, but it’s one I’m going to attempt to make.”

Department officials declined to specify the size of the SPAR request to the Office of Management and Budget but spokeswoman Laura Achee wrote via email that they “recognize that there are funding sustainability issues for SPAR and are committed to working with the Legislature to address them.”

DEC officials have also supported increasing the surcharge on refined fuel products sold in the state from 0.95 cents per gallon to 1.5 cents to help cover an anticipated revenue shortfall in the fund.

The refined fuel surcharge — dedicated to the prevention account in the fund — was implemented in 2015 to further support the SPAR fund, which had largely relied on a 5-cent per barrel charge on oil produced in the state for revenue. Money from fines and settlements related to hazardous substance spills is also deposited into the prevention account.

When the roughly 1-cent per gallon surcharge was put on refined products it was expected to bring in approximately $7.5 million per year, but actual revenue has been about $1 million short of that.

The account held $8.5 million at the end of 2019, according to DEC’s annual SPAR report.

Overall, more than $25 million was spent from the SPAR fund in fiscal 2019, including a $9.4 million capital appropriation to pay for PFAS cleanup at state-owned airports, while just $16.3 million was collected; the vast majority of which came from the surcharges.

The Legislature also spent $5 million from the response account in 2018 to export contaminated oil from a Wrangell junkyard.

Brune said he believes the pandemic will exacerbate the funding issue.

“With COVID, people are just driving less; they’re working from home and not traveling,” meaning less fuel subject to the surcharge will be sold, he said.

He also questioned whether it is appropriate for cleanup of contaminated sites to be paid for with revenue from fuel and oil surcharges given those products may not be the source of the contamination.

The long-term solution for the fund is more North Slope oil production to apply the 5-cent surcharge to, Brune said.

DEC officials are continuing their review of the state’s detailed Oil Discharge Prevention and Contingency Plan, or C-Plan, regulations for possible changes with twice-weekly meetings in which the statutes, regulations and proposed changes are vetted “line by line,” Brune said as well.

“We want to make sure that we can justify what we have currently in the regulations,” he said.

The department opened a scoping period to solicit comments on the highly technical operational and equipment requirements for companies producing and shipping oil and fuels last December. Numerous groups, including the congressionally mandated citizens' advisory councils for Cook Inlet and Prince William Sound, expressed concern that changes could be made to weaken protections against a spill or the ability to respond to one by the decidedly pro-development Dunleavy administration.

Gov. Mike Dunleavy made reducing the regulatory burden on industry a large part of his campaign in 2018 and his administration has initiated that work across state government.

Comments from individuals were solidly against the prospect of changing the oil spill regulations, while associations — including the councils — and companies in the oil and shipping sectors largely suggested detailed technical regulatory amendments.

The councils were established by Congress after the 1989 Exxon Valdez oil spill.

Prince William Sound council spokeswoman Brooke Taylor wrote in response to questions about the spill regulation scoping that the council is encouraged by Brune’s commitment to hold an extended comment period on any changes that are proposed but is still concerned about the broader process that is in the works.

Council leaders contend because DEC has chosen to make the entire 60-page regulatory package subject to review instead of proposing specific changes, the burden of the review has been shifted to the public, which must defend what is on the books rather than the department defending its changes.

Brune has said he did not want to potentially taint the public’s review by having the department make its proposal public too early in the process.

“Nothing in the regulations we will propose will increase the risk of an oil spill in Prince William Sound or anywhere else in Alaska,” he said to the council.

DEC’s Achee wrote that there is no hard timeline for when the review will be complete as it is a “process-driven situation.”

“If there are proposed changes, we will ensure that the public has plenty of time to review them and comment,” she wrote.

Cook Inlet Citizens' Regional Advisory Council members were told by DEC officials that the timeline for the review has been pushed back to at least the end of the year, according to the council.