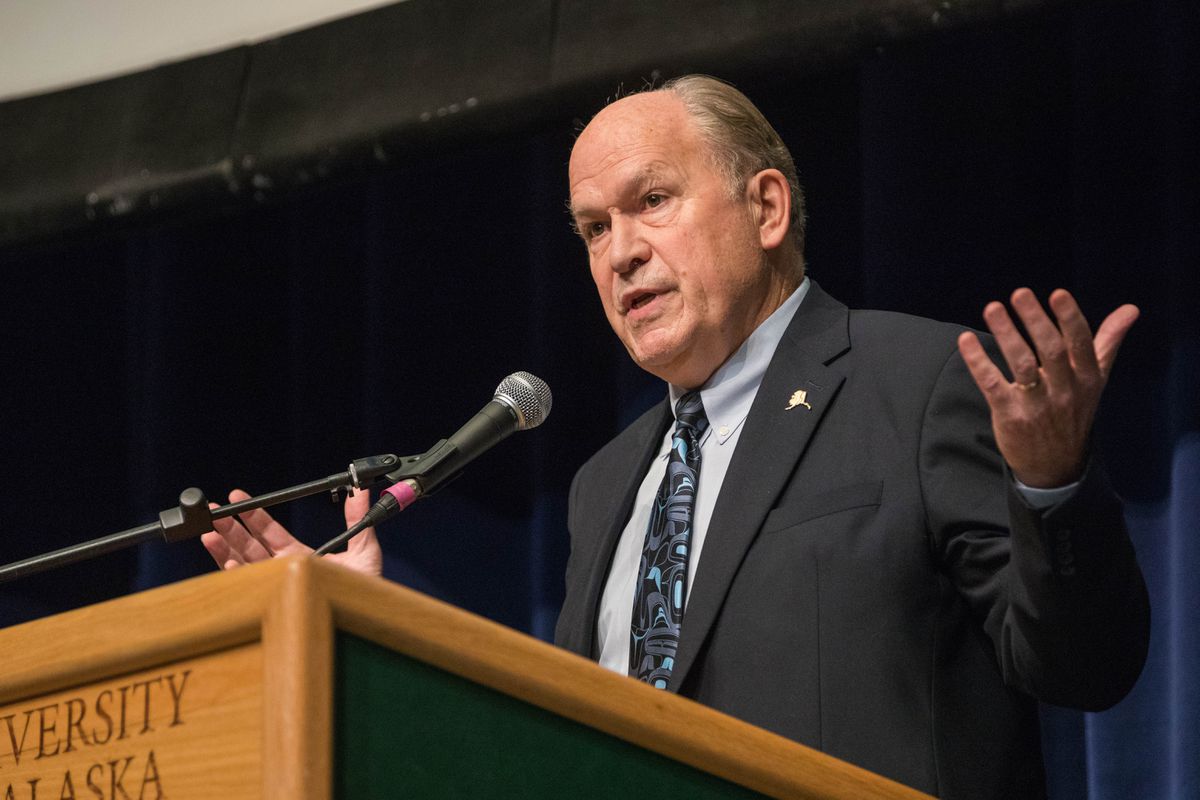 Joining Walker in cofounding the venture is Keith Meyer, the former Alaska Gasline Development Corp. CEO who Walker selected to lead the project during his administration, along with Fairbanks-area entrepreneur Bernie Karl and Joey Merrick representing the Laborers Local 341 construction workers union.

Walker said during a Monday afternoon press briefing in Anchorage announcing the formation of Alaska Gasline and LNG that the state, through AGDC, has significantly derisked the now $38 billion Alaska LNG Project by securing more than 70 permits and authorizations “including the ones that take years and decades to obtain,” but it’s time for the work to transition back to the private sector.

“Without their leadership and their pushing forward and their completing the permitting process we wouldn’t be here today,” he said of Gov. Mike Dunleavy’s administration.

“I think Alaskans are ready for this project to happen.”

The Federal Energy Regulatory Commission published a record of decision in May approving construction of the megaproject — North Slope gas treatment and Kenai Peninsula LNG plants connected by an 807-mile gas pipeline — and the state-owned gas line corporation has also secured federal rights of way and other environmental permits for the effort.

Meyer, who stressed the importance of attracting customers while leading AGDC from 2016 to 2019, said the megaproject has no significant technical barriers and can be financed. He acknowledged that the global oil and gas industry has taken a beating from pandemic-depressed prices this year but noted a significant long-term growth trajectory remains for worldwide LNG demand.

“The (LNG) industry has matured and Alaska is in a beautiful position to participate in this industry,” Meyer said.

The prospect of commercializing the roughly 30 trillion cubic feet of natural gas resources in the Prudhoe Bay and Point Thomson fields has caused the state, private ventures and oil companies to repeatedly investigate various project structures to make a gas line economic. The cost of the roughly 800-mile gas pipeline has generally served as the impediment to developing what is otherwise a world-class resource.

Under Meyer’s leadership AGDC attracted interest in the project from several of Asia’s largest LNG buyers, including Tokyo Gas and Korea Gas. Walker and Meyer most notably in November 2017 signed a nonbinding project venture agreement the three national Chinese mega corporations — including Sinopec, the state oil and gas company — to finance and purchase LNG from the project during a trade ceremony in Beijing attended by President Donald Trump and Chinese President Xi Jinping.

In early 2016 Walker elected to have the state take Alaska LNG over from the North Slope producers after the industry majors said they would otherwise slow-roll development amid depressed LNG market prices at the time.

Prior to becoming governor Walker, an attorney, served as general manager for the Alaska Gasline Port Authority, a joint effort by the City of Valdez and the Fairbanks North Star Borough to develop a gasline from the North Slope to Valdez.

The appropriate role for the state in the massive development was a contested topic during the 2018 gubernatorial race; Dunleavy has long said that private industry should lead the work.

AGDC leaders under Dunleavy have said they want to transfer the project to private hands by the end of the year or shortly thereafter.

Walker said shifting Alaska LNG back to the private sector is the right move now given the state’s ongoing structural deficits and inability to finance major work, stressing that he simply wants the project to move forward.

“We didn’t have enough time to put all the pieces in place,” Walker said, adding he hopes to meet with AGDC leaders in the coming week to start negotiations on a transition. Those talks would follow concept-level discussions Walker had with Dunleavy and AGDC board chair Doug Smith earlier this year.

The public corporation could still represent the state’s interests in project development if a transition is achieved, he said as well.

“This isn’t a matter of AGDC going away necessarily, but it’s us taking the baton,” Walker said.

AGDC officials noted in an emailed statement responding to the AGLNG unveiling and request that this year they announced a new, $38.7 billion cost estimate for Alaska LNG that makes the project more competitive — down more than $5 billion from the $44.3 billion price tag given it in 2015, which was below the initial $45 billion to $65 billion range given by BP, ConocoPhillips and ExxonMobil before that.

“State of Alaska policymakers have made it clear that adequately funded third parties will need to fund Alaska LNG construction and lead the project forward. Any party with the appropriate resources and qualifications to advance the Alaska LNG Project is welcome to participate in the strategic path for Alaska LNG that the AGDC board defined this past spring,” the statement reads.

AGDC has not had any formal negotiations with Alaska Gasline and LNG, according to representatives.

In January, Meyer pitched the AGDC board to negotiate a transfer of Alaska LNG — its technical data, permits and other assets — to a private consortium he had put together to relieve the state of the financial burden of the project.

Meyer said Monday that after engaging with AGDC he believes Alaska Gasline and LNG will find a receptive investor base to fund acquisition of the project and move toward securing additional investments for construction.

“As I said in the past, the state should have the option to invest in the future but not the obligation. To me this is not taking (the project) away from the state either,” he said.

When asked about silent partners in the venture, Walker said, “What you see is what you get; there’s nobody behind the curtain,” adding, “we’re not out here to get rich off this project; we want to make it happen.”

AGDC has spent roughly $460 million advancing the Alaska LNG Project and the smaller, “backup” Alaska Stand Alone Pipeline Project over the past decade.

Karl, a well-known Alaska entrepreneur and the owner of Chena Hot Springs Resort, said he was long against the project but had his mind changed during a trade trip to China put on by Walker’s administration.

“Our gas is wanted all over the world and it’s up to us to get it to market,” Karl said.