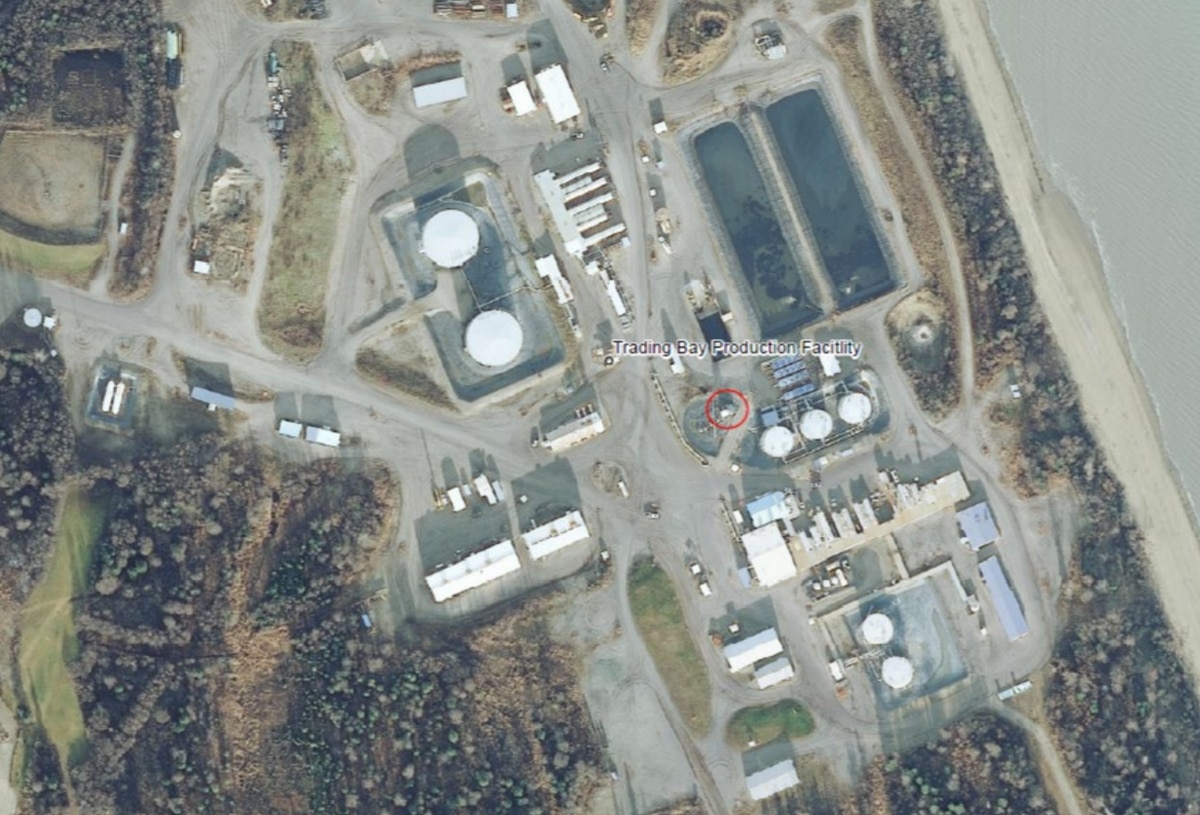 Aerial view of Hilcorp's Trading Bay Production Facility near Kenai, where a spill was reported to the state on Dec. 15, 2020. The spill site is indicated by a red circle. (Screenshot from Alaska Department of Environmental Conservation situation report, Dec. 16, 2020)

Aerial view of Hilcorp's Trading Bay Production Facility near Kenai, where a spill was reported to the state on Dec. 15, 2020. The spill site is indicated by a red circle. (Screenshot from Alaska Department of Environmental Conservation situation report, Dec. 16, 2020)

An oil spill at a Hilcorp Alaska facility on the west side of Cook Inlet was discovered Tuesday afternoon, a state environmental regulator said Wednesday. The state reported that 190 barrels leaked from containment layers.

As of Wednesday afternoon, the spill was contained to the facility and had not reached Cook Inlet, according to an Alaska Department of Environmental Conservation report.

The spill was discovered by an operator at 12:30 p.m. Tuesday at the Trading Bay Production Facility, about 20 miles northwest of Kenai, and was reported two hours later, according to DEC.

“It’s a large quantity of oil, however, the weather is working for us right now,” said Jade Gamble, a unit manager for DEC’s Prevention, Preparedness and Response Program. “The ground is frozen so it’s not able to seep through the ground as easily as it would in the summertime.”

The spill is a mixture of 80% crude oil and 20% water, called “slop oil,” which can’t be sold, according to the report. On Tuesday, 15 barrels of oil were recovered from the spill.

The spill happened during a transfer of oil from one tank to another, the state report said. An operator noticed that one tank wasn’t filling proportionately to how much oil was leaving the original tank.

“After visual inspection, the operator observed oil under and around the edges of the secondary containment liner,” the state said.

Gamble said the oil is on the ground and not being held by any other containment barrier, but is in the facility and is at this point staying put. She said the groundwater is more than 100 feet underground and currently believed to be safe from the spill.

Hilcorp in a statement confirmed details of the state’s account of the spill. Spokesman Luke Miller in an email said the spill was “immediately isolated” and cleanup is underway.

Miller and the state both said no wildlife has been impacted.

Gamble said the priority now is making sure the spill doesn’t reach Cook Inlet. She said the cause is still under investigation.

In a report published online, the state cited “a leak in an underground line in the slop oil processing system.”

The facility is near Trading Bay State Game Refuge and Redoubt Bay Critical Habitat Area, which contain important bird habitat, particularly in the summer, according to the state report. During winter, many species have migrated from the area, but it is home to rock sandpiper, which are known to overwinter there and might be in the area, the report states.

Other potential overwintering wildlife include some species of waterfowl, seabirds, shorebirds, raptors and moose.