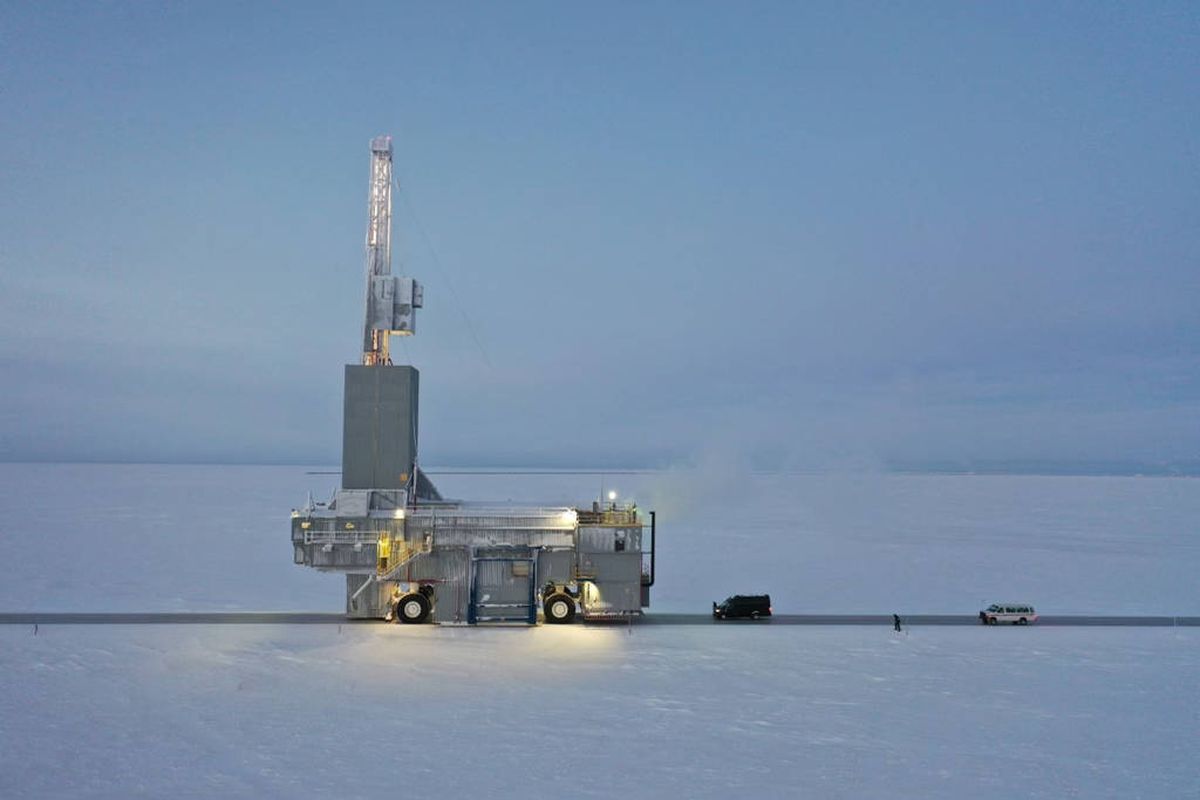 Pantheon Resources CEO Jay Cheatham said in an interview that drilling of the Talitha-A appraisal well into its namesake oil prospect began a couple weeks ahead of schedule on what was already an aggressive timeframe to put the work together.

Getting the project started early gives Pantheon “much more leeway on the testing program” later in the winter, Cheatham said.

The drilling, being done with Nordic Calista’s Rig 3, is expected to take 30 to 40 days and will intersect four zones that collectively have the potential to hold upwards of a billion barrels of recoverable oil, according to Pantheon leaders.

The well is planned to reach the base of the Kuparuk sand formation at a depth of about 10,200 feet and will also cut through two Brookian zones and the shallower Shelf Margin Deltaic that is the primary target.

“Each zone has the potential to change the trajectory of the company,” Technical Director Bob Rosenthal said.

Pantheon funded the well with a $30 million capital raise in November.

London-based Pantheon Resources’ Talitha project is being built off of new analyses of a well drilled in 1988 and data from a modern 3D seismic shoot of the broader area roughly 20 miles south of Prudhoe Bay.

The Pipeline State-1 well was drilled by ARCO just west of the Dalton Highway-TAPS corridor and though the 10,000-foot vertical Pipeline State-1 well has a roughly 2,200-foot oil-bearing column over four reservoirs, the technology and oil prices of the late 1980s it did not add up to a viable prospect at the time, according to Pantheon leaders.

Since then, Pantheon, which holds 100 percent working interests in the Talitha and nearby Alkaid prospect leases, respectively, has pressed ahead with advancing Talitha towards development despite pandemic-driven oil market conditions that drastically curtailed work on in oil basins worldwide, the North Slope included.

Company leaders have stressed the project’s location — adjacent to the Dalton Highway and pipeline — as a driver of its economics.

Recent improved oil prices — in the mid-$50s per barrel range for Alaska oil — have made company leaders “more optimistic” about the future Cheatham said, but their work plans did not change much even with the market disruptions of 2020. That’s because Pantheon estimates its projects have a break-even price of roughly $30 per barrel primarily because of their locations.

The company also holds the 76 million-barrel Greater Alkaid prospect just to the north and bisected by the transportation corridor.

“The (capital expenditure for development) is so much less because we’re that close to the haul road and the pipeline,” Cheatham said.

State Division of Oil and Gas officials approved the company’s applications to form the Talitha and Alkaid units in November; another formal but necessary step towards development.

Cheatham also said that the company has the state permits it needs for a long-term production test of a second well it hopes to drill at Alkaid this summer from a gravel pad near the Dalton.

While Pantheon would likely start with a phased development and a gradual ramp-up of production, the 2020 resource assessment envisions full build-out of Talitha as an 85,000 to 90,000 barrels per day project at peak production from 91 producing wells.

Farther south and well off the beaten path, Australian explorer 88 Energy announced Jan. 11 that it has purchased the legacy Umiat oil prospect from Malamute Energy.

The Umiat prospect in the far southeast corner of the federal National Petroleum Reserve-Alaska has long been believed to hold commercial quantities of oil — it was first discovered in the mid-1940s — but its isolated location far away from other North Slope projects and other factors to-date have impeded development.

However, Umiat is also just south of 88 Energy leases the company has dubbed its “Project Peregrine.”

“Our operational activity at Project Peregrine has provided 88E with a unique position from which to acquire the Umiat oil field at an opportunistic price point,” 88 Energy Managing Director Dave Wall said in a company statement. “The asset has potential to add significant value for shareholders, possibly as a standalone development but certainly in the event there is a material discovery in the imminent Project Peregrine drilling program.”

88 Energy plans to drill the Merlin-1 well at Peregrine starting in February.

A 2015 independent resource assessment pegged Umiat’s total proven and probable oil resource at approximately 127 million barrels. Now-defunct Linc Energy drilled two wells at Umiat in 2013-14 and 88 Energy took on the liability to abandon those wells, which is estimated at about $1 million, as part of the deal.