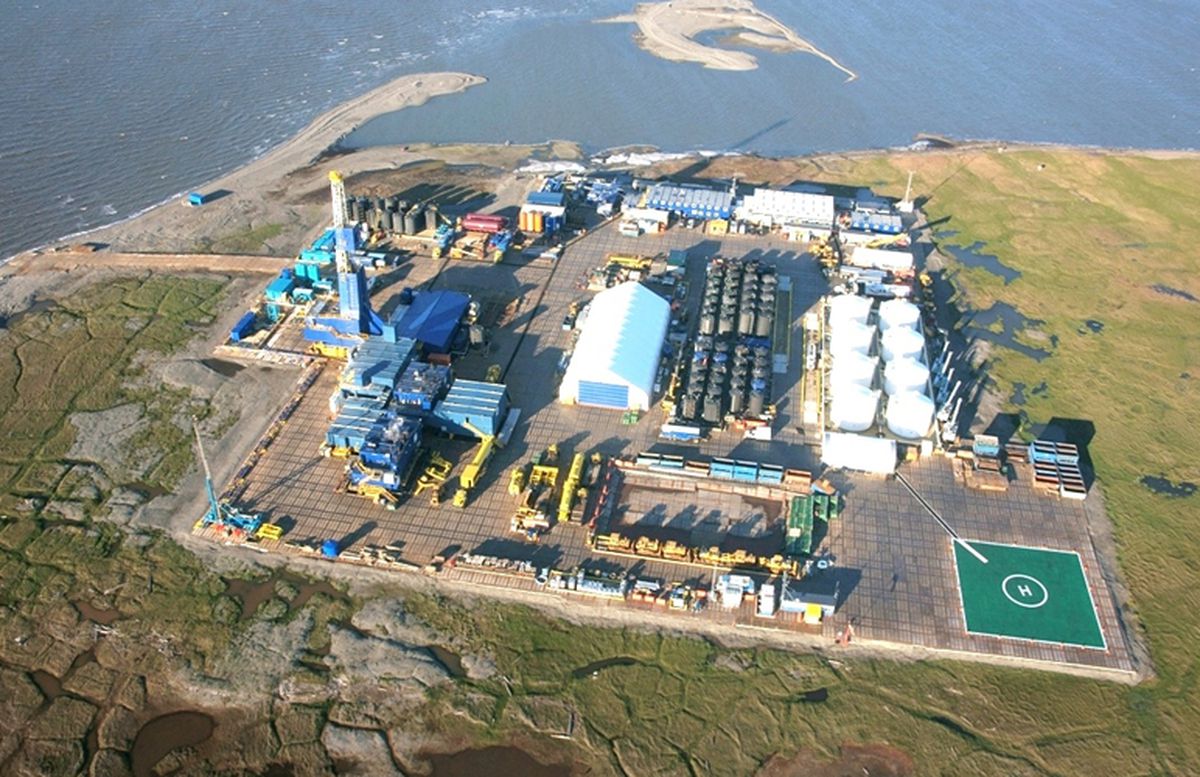 Alaska lawmakers expressed skepticism toward the plan backed by Gov. Mike Dunleavy to seek more than $4 billion in federal money to spur construction of the $39 billion Alaska LNG Project in their first official briefing on the proposal.

Alaska Gasline Development Corp. President Frank Richards told the Senate Finance Committee on Monday that the state-owned corporation has all 36 of the major federal authorizations and permits it needs to build the megaproject in-hand and is now working to gain support in Washington, D.C., for funding the vast majority of the project’s initial $5.9 billion phase.

Pitched as a development-ready project that would fit well into a massive, nationwide infrastructure spending bill — a stated priority of both the Trump and Biden administrations that has yet to materialize — and an energy project that would help displace dirtier coal and oil use in Alaska and abroad, members of Congress and the new administration are becoming more and more receptive to the concept, according to Richards.

Dunleavy unveiled the latest Alaska LNG funding concept in a late January newspaper op-ed that would have the federal government contribute 75 %, or about $4.5 billion, of the $5.9 billion AGDC believes it would cost to build the first section of pipeline to from the North Slope to the Fairbanks area as well as spur lines to connect ExxonMobil’s Point Thomson gas unit and Fairbanks utilities to the 42-inch export mainline.

“We’re trying to identify this as an opportunity to build a critical piece of infrastructure for the state of Alaska,” Richards said.

Earlier on Monday, AGDC officials received notice that the Department of Natural Resources had approved the right-of-way for the segments of the 807-mile gas pipeline that cross state lands, a necessary but expected step that now gives AGDC access to about 90 percent of the pipeline and North Slope gas treatment plant corridor, he added.

Richards said in a prior interview with the Journal that AGDC is in commercial negotiations with a “world-class pipeline operator” that would contribute the remaining investment for the first section of pipeline construction.

He emphasized that some members of the Biden administration are starting to see LNG as the “bridge fuel” between traditional fossil fuels and the large-scale clean energy production sought by Democrats that industry representatives have pitched it as.

Still, Senate President Peter Micciche — who managed the existing Kenai LNG plant when it was owned by ConocoPhillips — and other Republicans on the committee questioned the economics of the initial phase of the project and the likelihood of getting billions in federal money for a hydrocarbon project given the political implications.

“It’s hard to look at the economics of the first stage if the second stage is not a reality,” Micciche said.

The second, $20-plus billion phase of Alaska LNG to build the rest of the pipeline between Fairbanks and the Kenai Peninsula as well as the 20 million tons per year LNG plant would have to be ready to go in order to make the first pencil out, Richards acknowledged.

“If we are successful in capturing the federal stimulus funds that reduces the (private) cost of this project and makes it even more economically viable,” Richards said in response to Micciche’s questions.

He suggested backing the Alaska LNG Project could help the Biden administration smooth over relations with the traditionally Democrat-friendly labor unions upset with the president’s decision to cancel construction of the Keystone XL oil pipeline.

“It is an uphill battle but we see if we don’t ask for the funding, if we aren’t willing to march uphill, the funding won’t be made available to us,” he said.

Resources chair Sen. Josh Revak, R-Anchorage, said he continues to worry that the state will end up “subsidizing this gas in the future,” a common refrain particularly among Republican lawmakers when former Gov. Bill Walker pushed hard for the state to take control of Alaska LNG from the North Slope producers, which happened in 2016 amid an oil price crash.

While AGDC still owns the project — that ostensibly amounts to vast files of engineering and other data along with the government permits — Dunleavy has long said he wants to move it to private control.

The AGDC board of directors has a goal for making that hand-off by mid-year, at which point it will be up to the Legislature and administration to determine what, if any, stake in the project the state should keep, Richards said. He noted further that if the state sells the entirety of the project it would capture tax and royalty revenue from the gas but not other potential revenue streams.

“What is the optimal percentage that the state should retain and what is the risk associated with it?” Richards asked rhetorically.

He additionally said state officials will need to approve a long-term production and property tax plans for the project to attract private investment, which are potentially problematic hurdles. Settling the Alaska LNG “fiscal stability” issue was previously seen as requiring a constitutional amendment to get around the prohibition of one Legislature binding future lawmakers to abide by any contract or legislation.

Alaska’s current property tax structure for the project is also about 15 times more expensive to a project owner than payment in-lieu of tax, or PILT, plans negotiated for some Gulf Coast LNG projects, according to Richards, who also said local governments may be able to take a share of the Alaska LNG Project instead of applying existing oil and gas property tax rates.

Former Lt. Gov. Mead Treadwell also told committee members that the offshore North Slope LNG plant his company is proposing should move forward because it would provide one of the cleanest sources of LNG in the country.

Treadwell is CEO of Qilak LNG, a Lloyd’s Energy-backed firm that went public with its plan to use icebreaking LNG tankers to export gas from the Point Thomson field directly off the North Slope in October 2019, but has mostly been quiet since. At the time, Qilak leaders said they hoped to complete the project as soon as 2025.

The mid-sized $5 billion project would be anchored by an LNG facility located nearly 10 miles offshore from Point Thomson and would produce about 4 million tons of LNG per year for export to Asian markets and potentially some coastal Alaska communities.

“There is great interest in our feasibility studies to do a screening on reduction of greenhouse gas emissions, including the possibility of bringing CO2 back to Alaska for reinjection in (oil) fields that could use it such as Cook Inlet,” Treadwell said.

He insisted Energy Secretary Jennifer Granholm supports LNG exports because of the role the fuel can play in displacing coal and oil consumption worldwide and the relative efficiency of a North Slope LNG plant — they run best in cold weather — gives Qilak and Alaska a competitive advantage in that regard.

“We believe that we are America’s best choice for LNG. We believe that the state of Alaska has much to benefit from pursuing this project,” Treadwell said, adding that Arctic LNG projects in Russia have proven the icebreaking tanker concept.

Micciche quipped that the government-backed Russian projects rely on “creative” economics and questioned how the Qilak project competes with LNG deliveries from traditional global suppliers even with Alaska’s logistical advantage of being closer to East Asia ports.

“We have a better climate story; we have a better transportation cost story. We do not have competing gas prices at the wellhead with, say, the Henry Hub (market) where you can see a lot of volatility in that area. We do not have the Panama Canal and we have a cost of overall production which I believe is competitive with other supplies,” Treadwell said.

The $5 billion price for Qilak’s LNG plant and the subsea pipeline roughly equates to a development cost of $12.50 per ton, Treadwell noted.

AGDC officials have said the much larger Alaska LNG Project could provide delivered cargoes for approximately $7 per million British thermal units, or mmbtu, a standard industry measure. That is at the high end of the production and supply chain costs future LNG projects are likely to need to meet to be competitive but it is not out of the realm, according to a paper from the University of Oxford Institute for Energy Studies.

Richards said the two, despite seemingly competing for the same gas, can co-exist because of the immense size of the North Slope resource, which is roughly 35 trillion cubic feet, or tcf, of proven gas in Prudhoe Bay and Point Thomson and possibly up to 100 tcf of probable resources, many state and federal officials believe.

Treadwell said Qilak primarily needs “moral support” from state officials now but the company could need to discuss fiscal issues down the road.

Qilak representatives have discussed their project with Alaska Industrial Development and Export Authority officials, according to Treadwell, who suggested the state development bank could be used as an avenue for Alaskans to take ownership in the Qilak project as much as an underwriter.

“While we’re not looking for state support — this project has many financing options — we do look to have some ownership of the project held by Alaskans and I believe AIDEA can help do that,” he said.

An AIDEA spokeswoman did not respond to questions in time for this story.