Come up with a great Alaska street name, then prepare to battle thieves 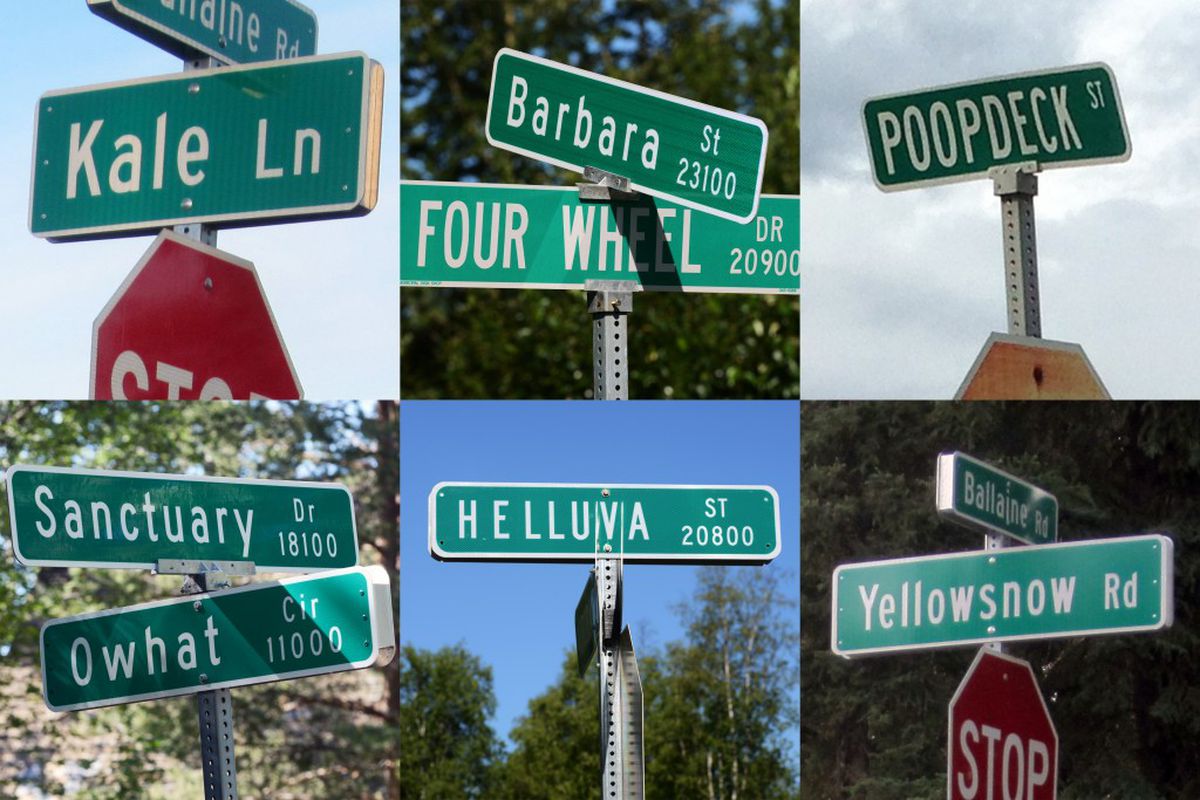 Drive through Alaska and you will inevitably see a street name that makes you do a double take.

In Alaska, "people tend to make stuff up a little bit more (than the Lower 48) … I don't know, maybe even have more of a sense of humor," said Bill Witte, a geographic information system specialist with the Fairbanks North Star Borough's emergency operations, who manages the address database in the Interior city.

When a street is developed, it's up to the property owners to name the road — and sometimes that means it can become a Helluva Street (yep, that's a real street in Chugiak).

There is a downside, though, to having an awesome street sign: "If it's too cool or too cute, it's going to get stolen," Witte said.

"Especially the rural ones, like the 'Oh Baby' one — half the time I go by, it's gone," he added.

When a sign is stolen, it can spark an "arms race," Witte said, in which the owner will reinforce the post with rebar or use screw glue to try to foil future thieves. "I had a neighbor who was like, into that," Witte said.

When a road is developed on a single piece of property, the individual gets to name the road. But when there are multiple properties on a street, a name must be approved by the majority of property owners.

Sometimes, getting agreement on a name can be a tricky proposition, Witte said. In one case, it took years for property owners to agree on a street name. In the meantime, according to Witte, the road was nameless.

Often, a road will be named after a loved one or a pet, Wilson said. But much of the time, people don't offer explanations for what the road name means to them when they apply.

The local government must make sure there are no duplicates, or similar-sounding names, for a proposed street name.

Neither Wilson nor Witte had seen anyone try to slip through an inappropriate name – although Wilson noted that Anchorage once had a Jackass Lane, until it was renamed to Silver Fox Lane in 1986.

In Homer, one memorable road is Poopdeck Street. It's named after a Clarence "Poopdeck" Platt, who lived in downtown Homer from the early 1960s until he passed away at 96 in 2000.

Platt's nickname came from the cartoon Popeye, where the father is named "Poopdeck Pappy," according to an article by Catherine Cassidy, written for the Kachemak Heritage Land Trust, which owns Platt's old property.

(The word poopdeck, the deck at the rear of a ship, has nothing to do with bodily functions: "Poop" comes from the French word la poupe, meaning the stern of a ship, according to the online etymology dictionary.)

Then there's Beer Can Lake Road in West Anchorage. Search Google Maps or the municipal database and the road pops up — but Wilson says the name isn't official.

Police needed a mapping reference for the area, Wilson wrote in an email, so the unofficial road name was added to the city's database.

Perhaps most important to street naming is having accurate data for emergency responses. Witte said in Fairbanks, access to a person's house sometimes is not on the right road, and in other cases a street name may not even exist.

"Cabin farms" — communities of dry cabins — are carved out by developers and often aren't given a street name or official house numbers. That leaves emergency responders searching for a location that has no documentation, Witte said.

In recent years in Anchorage, street naming has slowed considerably, Wilson said. Now, it's only every few months that she is asked for a name approval. The last memorable one was a name change to "Outta Place" in Midtown, she said.

Know of a unique or wacky street sign in your community? Send them our way! We're building a slideshow and would love to include your photos. Email pictures to laurel(at)alaskadispatch.com