Heading into the backcountry this weekend? Some local food businesses want to cater to you 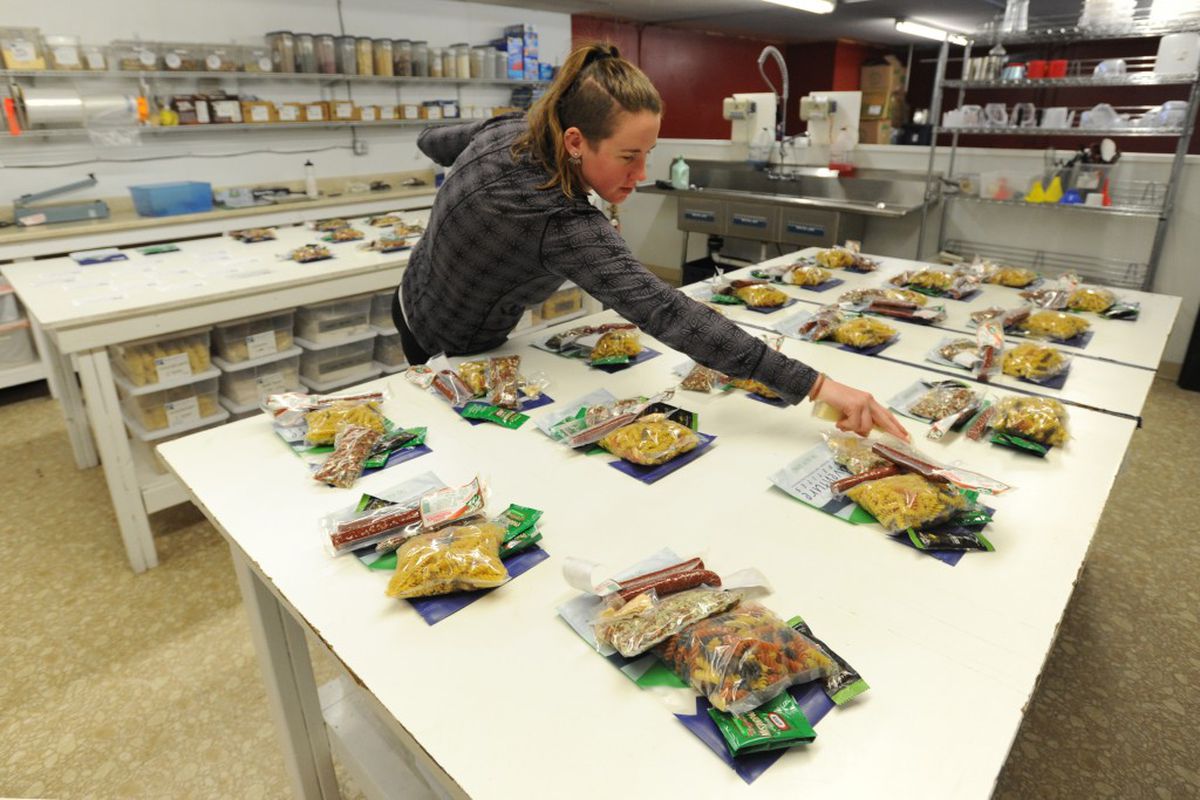 Making thousands of shelf-stable meals to feed Alaska backcountry adventurers each summer requires a lot of patience — and at least 30 gallons of homemade dehydrated chicken.

"We hope it'll last the season," said Adventure Appetites operations manager Bryan Caenepeel, who spent most of the winter air-drying 200 pounds of chicken and an additional 150 pounds of beef. "It's a labor of love."

It also happens to be a growing industry in Anchorage. At least three local businesses are making food designed to be eaten in the backcountry, as full meals or snacks. Each business fills a different niche.

Adventure Appetites, with its gourmet-inspired, trail-ready meal kits, wants to help people get a full cooking experience even when they're traveling. Heather Kelly, owner of Heather's Choice, offers dehydrated meals with nutrition in mind — specifically catering to those with allergy restrictions or who adhere to a Paleo diet. Kat's Epic Trail Bites are a cookie inspired by energy bars.

All three businesses have come on the scene in recent years, and all say that with mostly word-of-mouth advertising, business is booming.

"We more than quadrupled sales last month," Kelly said in an interview this week. "It's pretty incredible."

Kat Hubble moved Kat's Epic Trail Bites into a larger commercial kitchen and is now baking more than 400 packages of oat-based cookies twice a week. Since December, demand has doubled.

Hubble, 32, launched the business in August 2013. A former social worker, she started making a version of the cookies in 2007 as a way to deal with undiagnosed hypoglycemia that required her to eat small meals every two hours. Her mom suggested that a dense breakfast cookie might be a good snack option, and Hubble adapted the recipe from there.

An avid coffee shop visitor, Hubble began sharing the cookies with local baristas, who eventually encouraged her to go into business.

While the trail bites are mostly for sale in coffee shops and appear similar to cookies, Hubble said they're nutritionally closer to energy bars. The base of each bite includes gluten-free oats, fruit puree, whey protein and coconut oil. Hubble has developed 40 flavors, including carrot cake, banana split, chocolate chip cookie dough and toasted coconut.

"People say it's like a light version of a Clif Bar," she said.

Kelly, 28, acknowledges that at $15 per entree, her product comes at a price that's double what people would pay for mass-produced freeze-dried meals. But she thinks the benefits are worth the costs for ingredients like dark chocolate chili with bison and an Ethiopian doro wat with shredded quail.

"Folks are pretty excited to have a local food brand," she said.

Local has played into the Adventure Appetites model but it was a 2013 Backpacker Magazine editor's choice award for their reindeer scramble that gained them national attention, according to owner Dan Oberlatz.

For years, he'd been making food to take on backcountry trips for his guiding business, Alaska Alpine Adventures, serving more than 4,000 meals each season. So when he moved into new, larger space in South Anchorage in 2010 that "quadrupled" his previous rent, he decided to add prepackaged meals to the overall business.

"We were already providing all these meals," he said. "Might as well see if we can sell them."

Last year, they sold 3,500 meals on top of providing food on all their guided trips. Growth has been up so much that they've hardly done any advertising, he said: Until this week, a Facebook page for the company hadn't been updated since 2014.

Most of the meals — which include breakfast and dinner options — retail between $8 and $19, depending on the size of the serving. Recipes include chicken chipotle enchiladas and Alaska reindeer rotini.

The meal kits are slightly different from a typical freeze-dried meal. Instead of just requiring the user to add boiling water, the meals are mostly one-pot concoctions that include pre-measured ingredients requiring some cooking.

More complex meals can take about 30 minutes to prepare, but Oberlatz said that's partially intentional. The meals are geared toward people who want to have the social experience of hanging out and cooking in the wilderness.

"On a sunny day you can feed people whatever," he said. "But when times are tough, meals make a difference."