An Anchorage Olympian's journey from snowboarder to cake baker 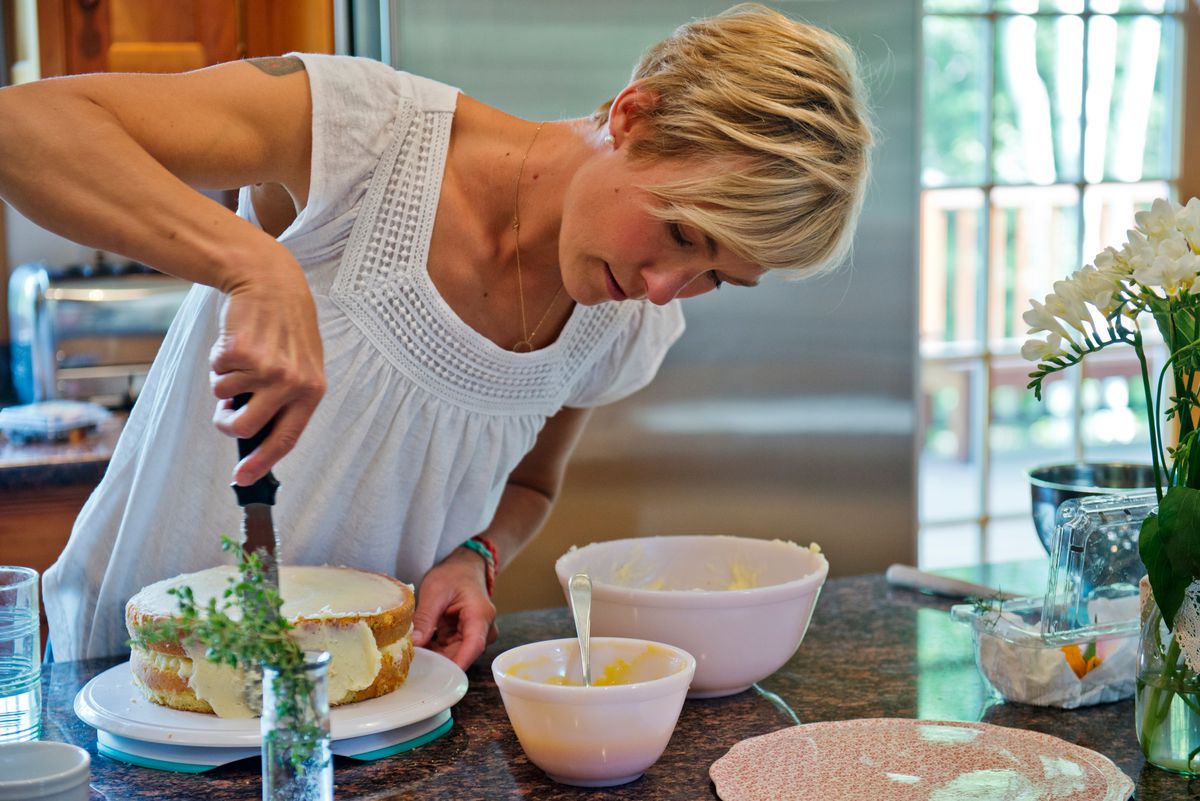 Two months after Rosey Fletcher's snowboarding career ended a decade ago — a career in which she earned eight World Cup wins, two world championship silver medals and an Olympic bronze — she participated in a leadership discussion for students at University of Alaska Anchorage. One of the other speakers there said something that stuck with her.

"You guys will be lucky, damn lucky, if you find one passion in life," the panelist preached. What would that mean for a pro athlete retired at age 30, she wondered?

"You know what? I'm going to prove you wrong," she recalled thinking at the time.

Now married, with two children and two dogs, Rosey Fletcher Grunwaldt is exploring a creative side that was difficult to express in her 15-year globetrotting career on the slopes. Working alone in the kitchen of her South Anchorage home, she meticulously bakes cakes, sweet breads and tarts, experimenting with flavors and designs. After years of practice, it has become her second great passion and an important way she interacts with this city.

"I turned 40 in November, shoot, and the kids were old enough where I'm like, 'Okay, I'm ready to do something,'" said Fletcher Grunwaldt, who has been a stay-at-home mother since she and her husband, Peter, started a family.

In February, Fletcher Grunwaldt gave it a name, Jerome Street Bakery, and quietly launched a website and an Instagram account. She doesn't serve many customers, but hopes to make up for it in the uncommon attention to detail she pays to each cake creation.

"There's like a whole ritual to it," she said.  "I want it to be unique, and be able to spend the time," she said.

In early June, she put on some classic rock and pulled together the materials to finish a lemon thyme cake. Her two children, Olga and Oskar, flitted outside in the summer sun. She applied buttercream frosting, which she said was "temperamental" on that warm day, and worked like a painter with a palate, her spatula chiming against the glass bowl as she scooped frosting in a steady rhythm.

Between the cake layers, each flecked with thyme baked into the batter, she spread lemon curd thinly enough that it wouldn't overpower the cake's other subtle flavors. She worked the sides to apply a thin layer of frosting that only partially hid the layers of the cake — a style she called "half-naked."

Fletcher Grunwaldt said she remembers visiting The Bake Shop in Girdwood as a child, where her mother was a baker. Sometimes she'd get a cookie. But it was many years later, after her snowboarding career ended, that she started to think about what she could bake herself.

"Living on the road and eating out all the time, I could barely boil water," she said.

It was in her racing years, however, that she was exposed to some great food. Austrian kaiserschmarrn, for one — shredded pancakes topped with powdered sugar and fruit. When her career was over, at least she knew what she liked.

After she married, she read books and practiced for family and friends, sometimes hosting large parties at her home with help from outside catering.

"I have a little type A in me — I'm a really hard worker and I like to know everything," she said.

Now, Jerome Street Bakery can fill up to five orders each week, a number she can manage while she's home with her children. She makes no money. Customers instead make donations to the charities and nonprofits Fletcher Grunwaldt chooses to benefit each month in exchange for the treats.

She suggests $35 for her offerings of the month, which include a fruit custard tart and Danish butter cookies with lavender creme in June. More specialized orders are $50, she said.

Metis Riley, co-founder of Straw for Dogs, which promotes good pet care with free and reduced-cost supplies, is grateful her organization was chosen this month. "We're a very small nonprofit, so any donation is welcome," Riley said.

But spreading the word to Fletcher Grunwaldt's network of friends and followers about Straw for Dogs could prove more valuable than the cash, Riley said.

Fletcher Grunwaldt says gratitude is central to Jerome Street Bakery. Charitable giving is the most important first step, but gratitude is a flavor that infuses every cake, tart and sweet bread. It's the appreciation for the new customers she meets, the honor she feels to be asked to make something special and the inspiration she collects with other creative collaborators.

"It feels like such a fluid concept, as every day I find a new meaning or interpretation that I hadn't realized before. I like the idea that one can find gratitude in new ways, or through everyday experiences," she wrote in an email after thinking about what the word meant to her. "It's humbling in a way."

She calls her creations "gratitude cakes."

"I guess the path that I'm on, that's just not what I'm looking for," she said of income potential.

"I like that you can also purchase something, but you're giving back, and that really spoke to me," she said.

Young served Fletcher Grunwaldt's petit fours at a party with friends, and at first, they were slow to disappear.

"They were as good as they were beautiful. A lot of ladies had a hard time wanting to eat them because they were so pretty," she said.

Back home, everything in Fletcher Grunwaldt's kitchen is spotless, except for her bare feet, which had been walking in her garden soil when she cut thyme for the recipe moments earlier. She moved the cake on a rotating tray and requested quiet.

"I need to pay attention, so I gotta stop talking for a second," she said.

While in the zone, a one-ness with the task she says is similar to how she felt riding mountainsides, she positioned lemon wedges and freesia flowers delicately, ending the process with a visual flourish she said is the most fun part.

After she photographed it, the cake left her home with a promise that the customer would donate $35 to Straw for Dogs. But for Fletcher Grunwaldt, who demands a lot of herself, not everything she creates will make it that far.

A few weeks earlier, just an hour before she was leaving for a party, she threw a tart crust in the garbage and began work on a new one. Perhaps it was silly, she said. There was no chance the host of the party was going to tell her it was bad. But anything that involves love comes with challenging moments like these.

"In my heart of hearts, I would have known it wasn't my best," she later wrote. "That what keeps me going. Working, experimenting, failing, the small successes — hopefully one day creating something from my dreams."