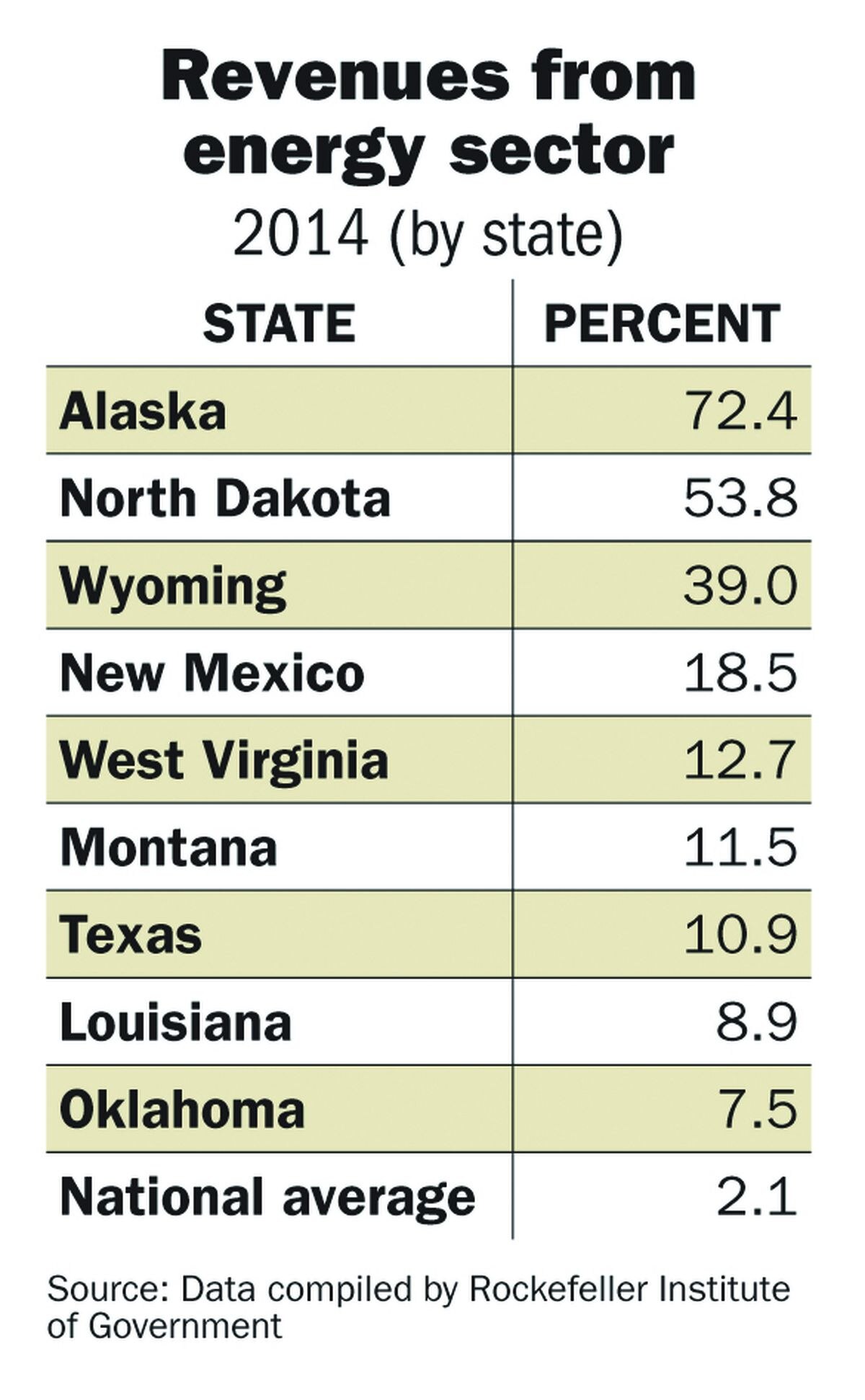 JUNEAU -- The nation's top oil-producing states powered through the last recession with barely a hitch, but now the collapse in oil prices is hobbling budgets in Alaska and elsewhere.

But a new report says none is facing the same budget strains that Alaska is, highlighting differences in state tax structures.

"The oil boom drove North Dakota's revenue growth, while declines in Alaskan oil production and cuts in petroleum taxes pushed Alaska tax revenue down," the report said, contrasting a near-tripling of North Dakota revenues with a 57 percent decline in Alaska.

The report from the Rockefeller Institute of Government at the State University of New York documents a 2.1 percent increase in state government revenues nationally. Such revenue growth usually lags behind an economic recovery, sometimes because states have intentionally cut their taxes, sometimes because sales taxes haven't recovered to pre-recession levels because consumer spending hasn't fully recovered.

But the June report also singled out several states where energy production plays a particularly important part in the economy and the financing of government, including Texas, Louisiana, Wyoming, West Virginia, New Mexico and Oklahoma, along with Alaska and North Dakota.

Nowhere, the Rockefeller report stated, were energy production taxes as important to government finances as in Alaska, where in 2008 they provided 79 percent of tax revenue. Wyoming was the next highest at 37 percent, while it was 34 percent in North Dakota.

By 2014, with the growth of new production from shale and the beginning of the decline in oil prices, Alaska's reliance on petroleum revenues had dropped to 72 percent, but North Dakota had risen to 54 percent and Wyoming to 39 percent.

While the report shows nine states where revenues from oil, gas or coal production play a significant role in providing money for state government, none are as reliant as Alaska. Alaska funds 90 percent of its general fund with oil taxes, it said.

"Oil booms and busts, therefore, have a big impact on Alaska's budget," the report said.

It contrasts that with what some other states do with their volatile energy revenues.

North Dakota, for example, places a cap of $300 million on oil and gas taxes that can go into that state's general fund. The remainder goes into North Dakota's Legacy Fund, similar to the Alaska Permanent Fund, as well as several other funds for strategic investments, property tax relief, disaster recovery, and others.

That's meant over the last few years only 3 percent of state general fund revenues have come from oil and gas.

North Dakota's single biggest revenue source has been its statewide sales tax, with receipts there booming along with the state's economy in recent years.

Texas, the nation's largest oil producer for decades, does something similar to what North Dakota does.

Its oil and gas taxes provided 11 percent of state tax revenues. But Texas doesn't put substantial oil and gas tax revenue into the general fund, instead putting it mostly into its Economic Stabilization Fund and Highway Fund.

Texas has a much more diverse economy; its state treasury is funded mostly by sales taxes.

Wyoming is also extremely dependent on energy production, but in Wyoming's case that means coal. Its huge strip mines make it the nation's largest coal producer.

Wyoming puts 25 percent of its severance taxes into its general fund, with the remainder going into the Budget Reserve Fund, the Permanent Wyoming Mineral Trust Fund, and others.

"In the last four years, Wyoming had doubled the size of its rainy day funds. Thus, the state is prepared to face the falling oil prices, at least in the short term," the report said.

The report also notes the size of Alaska's budget savings account, $14 billion at the time. It didn't mention the Alaska Permanent Fund, which now holds $54.5 billion. Alaska puts a small portion of its oil revenue in that fund each year.

But the report also noted Gov. Bill Walker's statement that the savings were a temporary fix and not sustainable, and changes were necessary.