Clinton 'extremely careless' with emails, but FBI recommends no charges

By Matt Zapotosky, Rosalind S. Helderman, The Washington Post
WASHINGTON – FBI Director James Comey said Tuesday that his agency will not recommend criminal charges against Hillary Clinton for her use of a private email server as secretary of state but called Clinton and her staff “extremely careless” in handling classified material.

The announcement was stunning both for the level of detail Comey provided about an investigation that he ultimately believes should conclude without charges, and for the fact that the FBI director publicized his guidance before federal prosecutors had reached a final determination.

As he was about to proclaim that the presumptive Democratic presidential nominee should not be charged, Comey said officials at the Justice Department “do not know what I am about to say.” But he said he felt the American people deserved to know the details of an investigation that had dogged her campaign.

“Although there is evidence of potential violations of the statutes regarding the handling of classified information, our judgment is that no reasonable prosecutor would bring such a case,” Comey said. He said that while the ultimate decision would be left up to Justice Department prosecutors, the FBI was expressing its view “that no charges are appropriate in this case.”

[Even without charges, FBI rebuke leaves a heavy political cloud over Clinton]

The decision effectively means that Clinton will not have to fear criminal liability as her campaign moves forward, though Comey leveled sharp criticism at her past email practices and called into question many of her defenses.

The FBI director said those who acted as Clinton and her staffers did were “often subject to security or administrative sanctions,” though in comparing her case with similar investigations in the past, the bureau did not find any of the aggravating factors that typically lead to criminal charges. 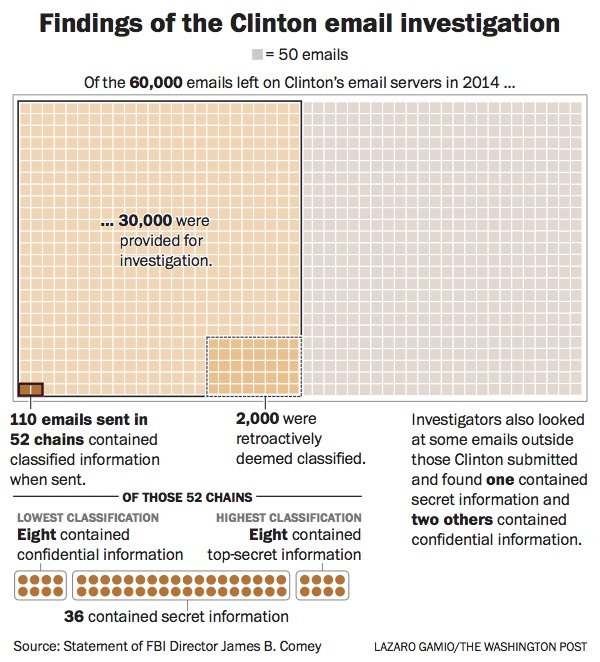 State Department spokesman John Kirby said, “We don’t share that assessment.” But he added that the department is “always looking for ways to improve.”

A spokesman for the U.S. Attorney’s Office in the Eastern District of Virginia, whose prosecutors are involved in the case, declined to comment. A Justice Department spokeswoman said she was preparing a possible response.

Hillary for America campaign spokesman Brian Fallon said in a statement: “We are pleased that the career officials handling this case have determined that no further action by the Department is appropriate. As the Secretary has long said, it was a mistake to use her personal email and she would not do it again. We are glad that this matter is now resolved.”

At a campaign event in North Carolina with President Barack Obama, Clinton did not address the issue.

Comey said investigators had sifted through 30,000 emails Clinton provided to the State Department for public release and several thousand more determined to be work-related that Clinton did not turn over. They were looking, he said, at whether classified information was improperly stored or transmitted on a personal system in such a way that it might have violated two federal statutes. One, he said, makes it a felony to mishandle classified information in an intentional or grossly negligent way, and the other makes it a misdemeanor to knowingly remove classified information from appropriate systems or storage facilities.

Investigators, Comey said, discovered significant carelessness, but they did not find – as in other cases that went forward – intentional mishandling of classified information, indications of disloyalty to the United States or efforts to obstruct justice.

The announcement came only about 72 hours after FBI agents interviewed Clinton, and only about a week after former president Bill Clinton had a meeting with U.S. Attorney General Loretta Lynch aboard her plane. Both Lynch and Bill Clinton, through a representative, asserted the conversation was unplanned and social, though it sparked significant outrage.

On Friday, Lynch announced that she would accept recommendations from career prosecutors and FBI agents leading the probe – including Comey – in a bid to quell concerns about the independence of the probe. Comey’s announcement, though, immediately sparked criticism that the outcome of the high-profile probe was a foregone conclusion, influenced heavily by politics.

Presumptive Republican presidential nominee Donald Trump tweeted, “The system is rigged,” and asserted that former general and CIA director David H. Petraeus, who pleaded guilty to a misdemeanor charge of mishandling classified information, “got in trouble for far less.” Petraeus was accused of turning over highly classified information to a woman with whom he was having an affair, and agents believe he lied to the FBI, though he was never charged with that particular crime.

House Speaker Paul Ryan, R-Wisconsin, said in a statement that Comey’s announcement “defies explanation” and that not prosecuting Clinton would set a “terrible precedent.”

Comey, who did not take questions, defended the bureau’s work.

“Only facts matter, and the FBI found them here in an entirely apolitical and professional way,” Comey said.

Comey has a reputation as an independent thinker in the government. As deputy attorney general in the George W. Bush administration, he famously rushed to the hospital where Attorney General John Ashcroft lay in an intensive-care unit to intervene when White House Counsel Alberto Gonzales and the president’s chief of staff, Andrew Card Jr., were going to try to persuade the ill man to reauthorize a domestic surveillance program.

Though he recommended no criminal charges, Comey systematically dismantled the public explanations Clinton has offered to reassure the public about her email system for the past 15 months.

When it was first revealed that Clinton used a personal email account during her years in office, Clinton said that she had never sent or received classified material through the account. She later amended those statements to say that her emails contained no information that was clearly marked as classified. Her supporters also insisted that a finding of sensitive material by the State Department and other government agencies was retroactive, a judgment by bureaucrats after the fact to “upgrade” material to a classified level.

Comey said that a careful analysis by officials from multiple agencies found there was classified material, and that in 110 emails the information was sensitive enough to be classified at the time it was sent or received. Eight email chains included information that was properly classified as “top secret,” the highest level of classification. He confirmed that seven of those conversations involved a “special access program” and were sensitive enough that a person in Clinton’s job should have known they contained classified material.

“There is evidence to support a conclusion that any reasonable person in Secretary Clinton’s position, or in the position of those with whom she was corresponding about these matters, should have known that an unclassified system was no place for that conversation,” Comey said. He said that while only a very small number were properly marked as classified, “even if information is not marked classified in an email, participants who know or should know that the subject matter is classified are still obligated to protect it.”

Clinton has also insisted that she submitted to the State Department all of her work-related correspondence from her time as secretary. Comey said the FBI had recovered thousands of work-related emails that had not been turned over, though he added that investigators found no evidence of misconduct in their deletion. He also for the first time revealed that Clinton had used multiple servers during her time in office.

Clinton assured the public that there was no evidence her server or devices had been hacked. Comey agreed there was no such evidence but concluded that the lack of a clear intrusion should give no confidence that the system had not been breached. He specifically noted Clinton’s practice of sending and receiving emails while traveling in foreign countries with sophisticated surveillance technology and said it was “possible that hostile actors gained access to Secretary Clinton’s personal email account,” given its lack of security.

OPINION: We need leaders who deliver for Alaska, not create division