Juno arrives at Jupiter: 'It's the end of the voyage, but it's the beginning of the science' 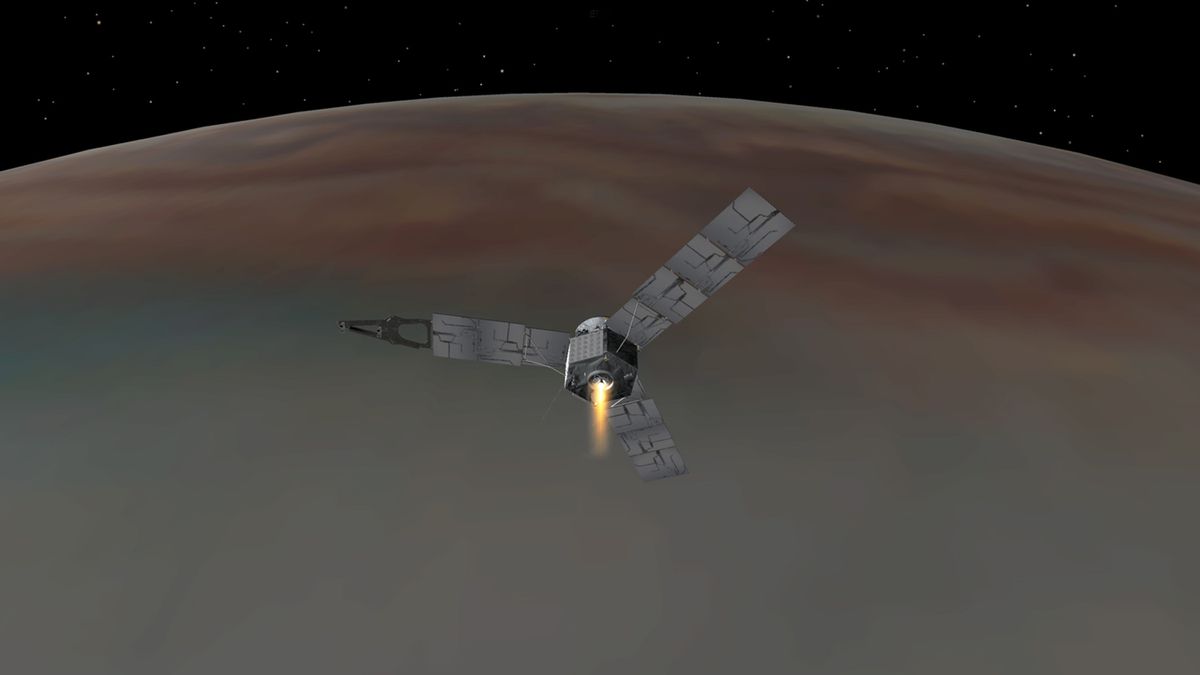 After traveling through the solar system for nearly five years, NASA's Juno spacecraft reached Jupiter on Monday night and began orbiting the mysterious planet at 8:53 p.m. PDT, a mere 1-second deviation from its intended schedule.

Upon hearing the tone that signaled Jupiter's entry into orbit, the mission control room at the Jet Propulsion Laboratory erupted into cheers, wild applause, high-fives and hugs.

"Juno, welcome to Jupiter," came the announcement over the intercom.

Rick Nybakken, Juno's project manager, celebrated the success by tearing up a copy of the space agency's contingency communications procedure — the plan for if the mission failed. They don't need that.

"Tonight, through tones, Juno sang to us, and it was a song of perfection," Nybakken said at a briefing.

The Juno mission seeks to answer profound questions about Jupiter that eluded the grasp of earlier missions. By studying its atmosphere, magnetic field, composition and internal structure, the scientists hope to learn what lies deep beneath the surface layers of this many-banded, red-eyed gas giant.

The answers to some of its most pressing mysteries — including whether Jupiter has a rocky core, and how much water lies within it — could help scientists understand how our solar system, including Earth, came to be.

"It's the end of the voyage, but it's the beginning of the science," said Michael Watkins, who took over as director of JPL on Friday.

As Juno made its final approach, engineers at the lab in La Canada Flintridge, Calif., waited quietly for the tones that signaled the spacecraft's progress.

One of those tones confirmed that Juno began a 35-minute main burn sequence at 8:18 p.m. This critical braking maneuver allowed Jupiter to yank the craft out of its orbit around the sun and pull it into its own embrace.

When it was over, the craft reoriented itself so that its three solar panels were facing the sun.

Jupiter is so far away that it takes 48 minutes for messages to travel between Earth and Juno. That meant the craft had to do it alone, relying on preprogrammed instructions.

Engineers had turned off Juno's scientific instruments days earlier, including the star-tracker cameras. As a result, Juno was flying blind.

It didn't seem to matter.

"NASA did it again," said planetary scientist Scott Bolton, the principal investigator for the Juno mission. "It's almost like a dream coming true right here."

[Scientists: 9th planet may exist, but it's not Pluto]

As it closed in on Jupiter, the craft's JunoCam took a series of pictures of the planet and its four largest moons. By weaving them together into an animated movie, scientists got their first direct view of planetary motion in action.

"In all of history we've never really been able to see the motion of any heavenly body against another," said Bolton, who is based at the Southwest Research Institute. He called the circular dance of the moons around the planet an example of "true harmony in nature."

Juno is now in a highly elliptical 53-day orbit around Jupiter, which means it won't make a close pass over the planet's surface for several weeks. But its instruments will be turned back on in two days, and the scientists are almost giddy with anticipation.

"What I'm really looking forward to is getting up close and personal with Jupiter on Aug. 27," said Steven Levin, Juno's project scientist at JPL.

More than anything, the scientists telegraphed relief that — for the time being — all had gone as planned.

"To know that we can all go to bed tonight not worrying about what's going to happen tomorrow is pretty amazing," said Diane Brown, Juno's program executive out of Washington.