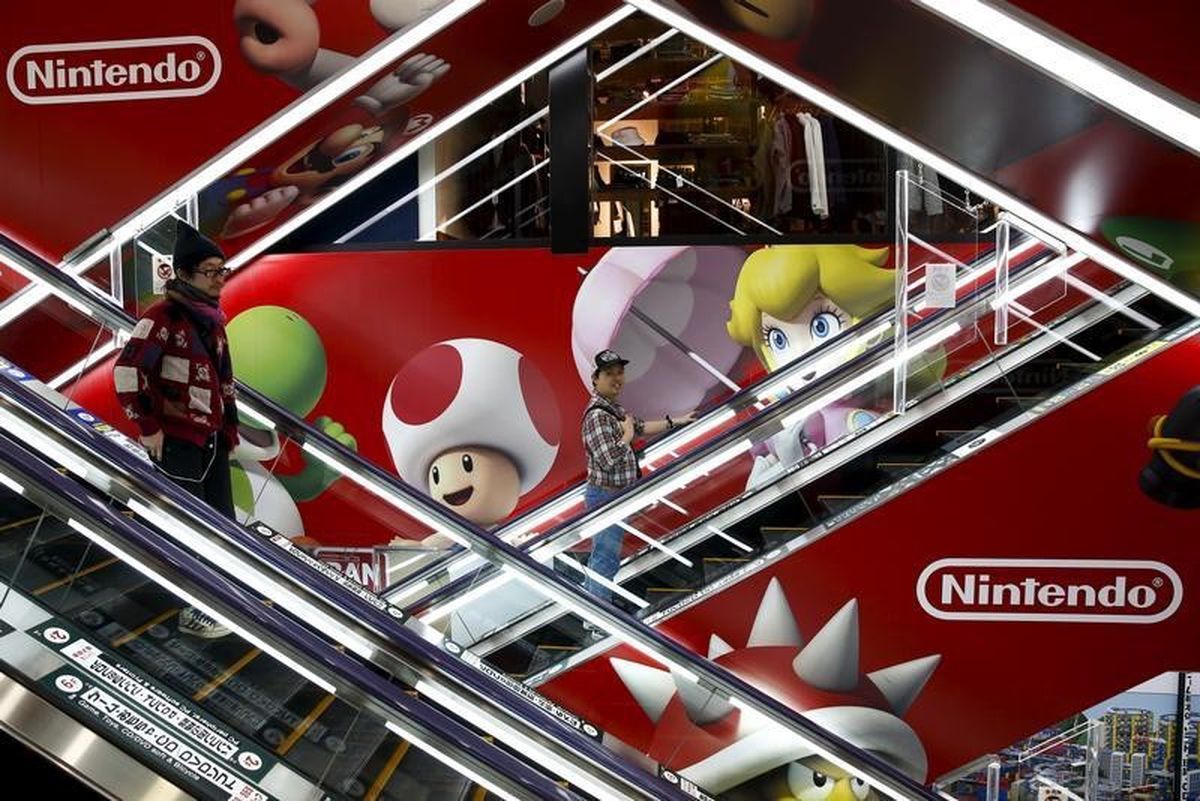 People ride escalators past an advertisement of the Nintendo video game maker at an electronic retailer in Tokyo. (REUTERS/Thomas Peter)

People ride escalators past an advertisement of the Nintendo video game maker at an electronic retailer in Tokyo. (REUTERS/Thomas Peter)

Early Friday morning, 19-year-old Shayla Wiggins hopped a fence to walk along the bank of Wind River in Riverton, Wyo. She was looking for Pokémon, the collectible cartoon critters that debuted in Japan in 1996 and proceeded to win the hearts of every fifth-grader since.

What Wiggins found instead would reduce her to tears, sparking a police investigation.

A week prior to her discovery, Wiggins's search for Pokémon along the Wind River would have been met with concern or ridicule. But the world — or, so far Australia, New Zealand and the United States, including Riverton, Wyo. — changed on Wednesday. That's thanks to Pokémon Go.

Pokémon Go has turned looking for video game characters in the real world into a real hobby.

For the uninitiated, Pokémon Go is a new augmented reality game that invites players to hunt for digital Pokémon on their smartphones, placed using an algorithm by the company Niantic Labs via GPS. The catch is the game, unlike the original Nintendo series and most video games to this point in history, requires physical exploration. By trading a Game Boy for a smartphone, Pokémon Go can filter reality into a giant game world. The combined effect is part bird-watching, part geocaching, part trophy hunting, with a heavy dose of mid-'90s nostalgia.

To collect Pokémon, players walk to a location and spy them on their smartphone. Seen through the smartphone's camera, the creatures pop into existence alongside physical objects. The mole-like Diglett peeks out of a toilet. Or a flaming demon Shetland called Ponyta gallops across the National Mall.

With an upward flick of finger or thumb, as though playing the world's tiniest game of skeeball, the Pokémon Go player attempts to capture these creatures with Poké balls. Repeated captures of the same type of creature yields candies. Force-feeding enough candies to a Pokémon causes it to grow in power. Powerful creatures battle at gyms, which are digital arenas located at real points of interest.

"We're excited that Pokémon fans and gamers can now start exploring their very own neighborhoods and cities to capture Pokémon using the Pokémon Go app," developer Niantic Labs wrote in a release on Wednesday. "Players can discover and catch more than 100 Pokémon from the original Red and Blue games."

If you are a Pokémon fan, or if you live in Australia, New Zealand or the United States, there is a good chance you have already stumbled across a Pokémon Go player (signs include vigorous touchscreen taps, eyes glued to phones and meandering walks). Perhaps you have fallen down its rabbit hole. The app is free to download and, like the franchise that spawned it, massively popular.

Twenty-four hours after its release on the U.S. market, Pokémon Go had been installed on more Android phones than the dating app Tinder, according to analysts at SimilarWeb. By Friday, Pokémon Go players installed the app on one of every 20 Android phones in the United States, and users spent an average of 43 minutes a day playing — much longer than the average time spent using Twitter, for instance. Similar data are not available for Apple phones, but Pokémon Go rocketed to the number one grossing iTunes app on Thursday on the back of its optional in-app purchases. Shares of Nintendo stock spiked 10 percent as the game beat expectations.

Pokémon Go is playing out across the globe in vignettes: In Sydney, an impromptu gathering Saturday afternoon blossomed into 2,000 Pokémon hunters who marched in procession like leafcutter ants. Half the world away, long after last call had come and gone, the millennials were still strolling through Washington, D.C.'s parks looking for rare Pokémon. According to a 40-year-old Pokémon Go player on Reddit, a 3 a.m. nocturnal hunt joined by two "twentysomething black dudes" aroused police suspicions that allegedly abated only when the cop downloaded the game himself.

Because the critters can pop up virtually anywhere, they already have — in offices, at funerals, in delivery rooms.

Pokémon, as Wiggins told Wyoming's KTVQ, can be found everywhere. Specific types are tied to certain habitats, thanks to geographic data. "I was trying to get a Pokemon from a natural water resource," she said.

True to the original Pokémon spirit, players can use their creatures to fight. Westboro Baptist Church, the site of a competitive Pokémon Go hotspot called a gym, became a social battleground as well as a virtual one. Progressive players who conquered the gym gave their Pokémon names like "LoveIsLove"; the Church gave a bird Pokémon a name using a homophobic slur.

(Players are divided into one of three factions and compete for dominance over gyms. The fountain on the White House's North Lawn, digitally accessible from the civilian side of the fence, is a prized location.)

To make this virtual world tick, Pokémon Go developer Niantic Labs borrowed heavily from the digital map master — Google. As Niantic chief executive John Hanke told Mashable: "A lot of us worked on Google Maps and Google Earth for many, many years, so we want the mapping to be good."

It was Niantic's Google DNA that enabled its previous game, "Ingress," to map out points of interest. When "Ingress" launched in 2011, it asked players to tag specific locations. "This is classic Google," Georgia Tech augmented reality expert Blair MacIntyre told New Scientist at the time. "They may get information about new monuments, and that actually helps them generate more interesting search results, because these are the things that local people say are interesting."

Pokémon Go uses the geographic information from "Ingress" to populate its world with Pokémon, so that water creatures are found near the shore, for instance. Public points of interest that give players items are called Pokéstops. Some of the most popular "Ingress" landmarks became gyms.

But this is where Pokémon Go takes an explosive turn — Pokémon Go is far more popular than "Ingress." Niantic's servers have crashed repeatedly over the last week, and it paused its global rollout. Some international players have attempted to find third-party routes into the game, only to be infected with viruses.

The popularity also means that certain points of interest, manageable in "Ingress" due to a much smaller player base, have been swarmed. What was a church prior to 2015 — and therefore an "Ingress" locale — became a home when Massachusetts designer Boon Sheridan bought it and converted it into a space to live. Now it is also a gym, which has been swamped by players. There is currently no option on Niantic's website for Sheridan to remove or alter the gym, prompting him to note the point on Twitter.

Despite the increased foot and car traffic — including some at odd hours of the night — Sheridan said he is not upset. "I'm not angry – it was more surprise than anything else," he told Buzzfeed.

Playing in the physical world comes with physical problems, too. Pokémon Go has fractured metatarsals and bruised shins. The game's loading screen cautions players to pay attention to their surroundings.

Worse still is the crime. On Twitter, Omaha, Neb., police reported a Pokémon Go robbery. As The Washington Post reported Sunday, Missouri police say players were robbed after visiting remote Pokéstops. The perpetrators allegedly used digital items called lures to make the Pokéstops more alluring to Pokémon — and the players who would follow them. Four suspects, all teenagers, were charged with armed robbery, as police recovered a handgun from one teen.

Players have also found themselves in uncomfortable situations. At Medium, Omari Akil, a black writer from North Carolina, describes the worry he felt when playing Pokémon Go, afraid that if he wandered — as the game seemed to want — he would arouse potentially lethal suspicion:

"I spent less than 20 minutes outside. Five of those minutes were spent enjoying the game," Akil wrote. "Very quickly my Pokemon catching dreams were obliterated by the unfortunate reality that exist for a Black Man in America. I realized that if I keep playing this game, it could literally kill me."

"I was walking towards the bridge along the shore when I saw something in the water," she told KTVQ. "I had to take a second look and I realized it was a body." Authorities believe the death was accidental, according to CNN.

Wiggins was shaken by the discovery. But she, like thousands of people like her, plans to return to play Pokémon Go another day.