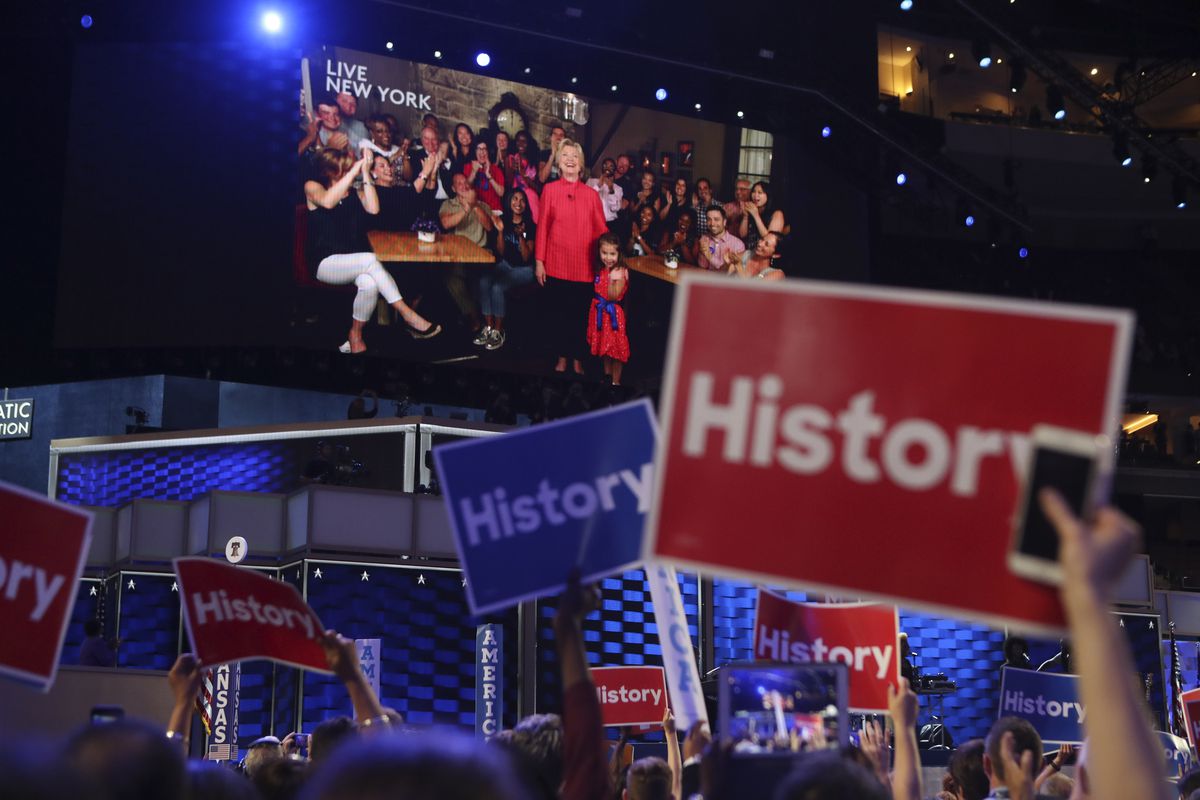 Hillary Clinton makes a video appearance at the end of the second day of the Democratic National Convention at the Wells Fargo Center in Philadelphia on Tuesday. Democrats formally nominated Clinton for president on Tuesday, making her the first female candidate to represent a major American political party. (Sam Hodgson / The New York Times)

Hillary Clinton makes a video appearance at the end of the second day of the Democratic National Convention at the Wells Fargo Center in Philadelphia on Tuesday. Democrats formally nominated Clinton for president on Tuesday, making her the first female candidate to represent a major American political party. (Sam Hodgson / The New York Times)

PHILADELPHIA — The Democratic convention formally nominated Hillary Clinton for president Tuesday, making history by choosing a woman to be the first standard-bearer of a major political party, a breakthrough underscored by a deeply personal speech by Bill Clinton calling her "the best darn change-maker I have ever known."

At 6:39 p.m. Eastern time, the hall erupted in cheers and joyful tears as South Dakota cast the decisive 15 votes to put Hillary Clinton over the threshold of 2,382 delegates required to clinch the nomination.

A sea of delegates waved multicolored signs with Clinton's "H" campaign logo, while others fell into hugs and several women jumped up and down with elation.

[As Clinton makes history, some already take it for granted]

Vince Insalaco, the chairman of the Democratic Party of Arkansas, where the Clintons built their public profile over two decades, said the choice of the first female presidential nominee was a historic moment.

"I'm so proud to be a Democrat tonight," Insalaco said, "and so proud that we can call this woman one of our own."

Clinton's primary rival, Sen. Bernie Sanders of Vermont, played a symbolic role in hopes of unifying the party behind her. After Vermont arranged to go last in the roll call, Sanders joined its delegation to roars of "Bernie, Bernie" and called on the party to rally behind Clinton.

But it was the appearance of Bill Clinton, shortly after 10 p.m., that stirred the crowd most, as he set out to share a more personal side of the sometimes-reserved former secretary of state.

Unspooling memories of their 45 years together, Clinton used warm and detailed anecdotes to argue that the couple's political enemies had spent decades creating a "cartoon" of his wife that he was now determined to puncture. Hillary Clinton is among the most unpopular presidential nominees in modern history, and the former president appealed to the audience to see through the political attacks on her.

"One is real," Bill Clinton said of the divergent portrayals of his wife, "the other is made up." He recalled the affection of Hillary Clinton's old friends, her empathy for those in need, and the praise she had won from Republicans as a senator and as secretary of state.

"You nominated the real one," Bill Clinton said to a long burst of applause. Seeming to realize that he had been speaking for 38 minutes, he added in classically loquacious Bill Clinton fashion, "We have to get back on schedule."

Bill Clinton's testimony was so personal that he even appeared to obliquely invoke problems in the couple's marriage.

Earlier in the evening, several dozen Sanders delegates paraded off in a coordinated demonstration against Hillary Clinton's nomination. Some of them said beforehand that they were attending their first Democratic convention and felt no party loyalty or compulsion to fall in line behind Clinton, whom they described as insufficiently progressive on new banking regulations, a $15 minimum wage, a ban on fracking and other issues.

"I'm just not there yet in terms of supporting Hillary, because her words are only her words, and I don't fully trust that she'll act on our agenda," said Ingrid Olson, 38, a delegate from Iowa.

The scenes in the hall, and the huge street protests that continued through Tuesday night, were more fractious than those at the party's gathering in Denver in 2008. Back then, Clinton, defeated for the nomination, moved to stop the roll call and nominate Barack Obama. Her gesture, aimed at soothing the bitterness of the primary fight, helped her supporters make peace with Obama and embrace his barrier-breaking candidacy.

Sanders and Clinton had their own brutal competition this year, and their policy differences were greater than those between Clinton and Obama — part of why many of Sanders' supporters are reluctant to get behind her.

Bill Clinton's task was clear: to humanize his wife but also energize Democrats by flattering those in the hall and villainizing Donald Trump, the Republican nominee.

"She never made fun of people with disabilities," Clinton said, referring to Trump's mocking of a disabled reporter last year. "She tried to empower them based on their abilities."

Yet as Clinton recounted his wife's well-chronicled professional accomplishments, he also tried to paint a portrait of a mother who is not as well known. Recounting the day they moved their daughter, Chelsea, into her freshman dorm at Stanford University, Bill Clinton recounted how Hillary Clinton kept looking for "one more drawer to put that liner paper in," reluctant to say goodbye to her only child.

The speech was extraordinary in its intimacy and in Bill Clinton's willingness to use their much-scrutinized marriage as a testament to her character. He began by recalling how he first met his future wife in 1971 at Yale Law School — he so nervous, she full of confidence — and spent almost 15 minutes describing courting her and proposing marriage three times before she said yes. At one point, trying to play a mind game, Bill Clinton told her that she should move to Illinois or New York and run for office rather than marry him and have other young Democrats eclipse her.

"They mean well, and they speak well, but none of them are as good as you are," Bill Clinton told her about their political generation. "She said: 'Are you out of your mind? Nobody would ever vote for me.'"

The convention underwent a notable shift as the evening went on: Sanders was barely mentioned, a deliberate decision by the Clinton campaign officials who organized the lineup of speakers. Advisers said that, with Hillary Clinton now the nominee, they wanted to focus on her character and political record, and on taking the fight to Trump, rather than continuing to nod to Sanders and his primary fight.

The crowd was subdued for much of the evening, but in the most searing part, nine African-American mothers whose children were killed by gun violence or in encounters with the police took the stage to chants of "Black lives matter." The women, who have been campaigning for Clinton for months, described how she had sat with them privately to hear their stories and worked with them to promote gun-control measures.

One of the mothers, Lucia McBath — whose 17-year-old son, Jordan Davis, was fatally shot after playing loud music in his car in 2012 — said Clinton "isn't afraid to say black lives matter," a phrase Trump and other Republicans have derided by saying that all lives matter. But McBath also said Clinton knew that Americans needed to come together to keep children safe.

"We're going to keep building a future where police officers and communities of color work together in mutual respect," she said.

Convention organizers, apparently seeking a balance with the mothers, invited the Pittsburgh police chief, Cameron McLay, to speak earlier in the evening. But as McLay spoke of fallen officers and called for a criminal justice overhaul, many in the hall carried on their conversations.

Democrats used Tuesday to appeal to some of their traditional constituencies, but they also highlighted Clinton's faith. A video was played in which she asked for a prayer and then joined a prayer circle, and an image on one of the screens for part of the evening showed a group of people laying hands on her.

It was a striking, and surely not accidental, contrast to the Republican convention last week, in which appeals to the faithful were somewhat muted and Trump scarcely mentioned faith in his acceptance speech.

The hosannas for Clinton were in marked contrast to the steady stream of boos that rained down at the mention of her name Monday. Still, the party's divisions remained in plain sight.

Many states announced that they had split their delegates by having representatives of Clinton and Sanders speak separately. And it was clear that some Sanders supporters were not ready to give up. Tim Vandeveer, the chairman of the Hawaii Democratic Party, announced that Sanders had won a majority of the state's delegates, calling him "the leader of our revolution, which shall continue."

Later, as the convention wound down after 11 p.m., black and white images of every previous president flashed on the screen, which finally seemed to crack as a smiling Hillary Clinton suddenly appeared by video connection.

The hall broke out in applause and shouts of excitement as Clinton acknowledged breaking the glass ceiling.

"If there are any little girls out there who stayed up late to watch," she said, "let me just say, I may become the first woman president, but one of you is next."