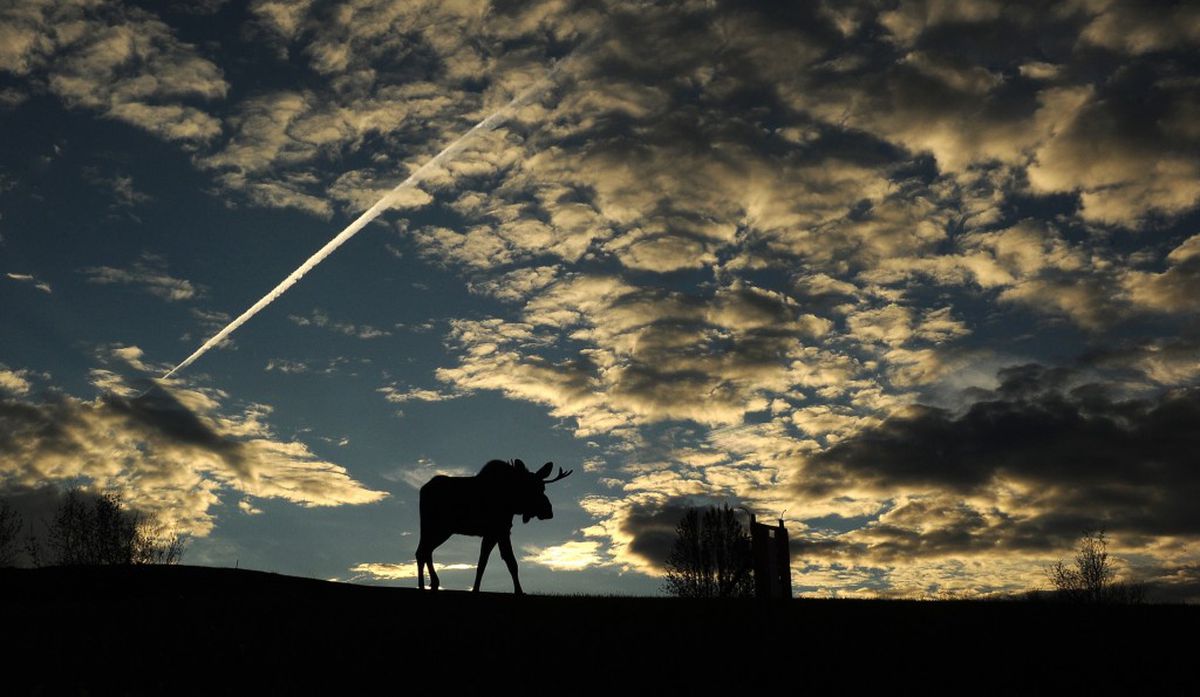 A moose feeds on the grass at Point Woronzof in Anchorage as a jet leaves a contrail across the sky. (Bob Hallinen / Alaska Dispatch News / file)

A moose feeds on the grass at Point Woronzof in Anchorage as a jet leaves a contrail across the sky. (Bob Hallinen / Alaska Dispatch News / file)

Conspiracy theories can be stubborn, particularly in the echo chamber of the internet.

One persistent belief in some quarters is that the government — or business, perhaps — is deploying a fleet of jet aircraft to spray chemicals into the sky to control the population, food supply or other things.

As evidence, they point to what they call "chemtrails," which are more commonly known as contrails, or condensation trails, produced at high altitudes as water vapor in jet engine exhaust condenses and freezes.

Adding fuel to the chemtrails theory is the fact that there are a few legitimate reasons for atmospheric spraying — "seeding" clouds to make rain, for example — and in recent years there has been some research on the idea of spraying chemicals as a potential way to fight global warming.

But now, scientists have become more organized in their efforts to shoot down the idea, conducting a peer-reviewed study in Environmental Research Letters that debunks chemtrails supporters' claims.

The goal, the researchers say, is not so much to change the minds of hard-core believers, but to provide a rebuttal — the kind that would show up in a Google search — to persuade other people to steer clear of this idea.

Steven J. Davis, a climate scientist at the University of California, Irvine, said he had the idea for the study after a conversation with a salesman at a mattress store.

When the man found out what he did for a living, Davis said, "he had very serious questions about what we were going to do about the chemtrails problem."

Davis said that when he got home, he searched the internet for peer-reviewed studies on the conspiracy theory, but found none.

The theory has been popularized on websites that display photographs of contrails but are described instead as chemtrails that persist in the atmosphere and contain harmful chemicals like strontium, barium and aluminum.

Other evidence cited by these theorists includes documents that are said to be laboratory analyses showing abnormally high levels of these and other chemicals in water and soil samples from areas where spraying is supposed to have taken place.

In the study, 77 scientists — experts in atmospheric chemistry and in the deposition of air pollutants — were shown some of this evidence and asked whether a chemical spraying program was the simplest explanation for it or whether there were others that were more straightforward.

With the photographs, all of the experts chose science over conspiracy theory. For instance, in a photograph of a contrail broken by a gap, chemtrails supporters say the gap is proof the spraying was turned on and off.

All of the scientists, however, said there were reasonable scientific explanations for the gap, the most commonly cited being that the aircraft had passed through an area of drier air, which would make that part of the contrail dissipate more quickly.

The lab analyses were also dismissed as evidence of a spraying program, although some scientists said there was not enough data to draw any conclusion.

And in two cases, an expert thought the analyses might be evidence of spraying. Many of the scientists said that the analyses showed normal, not elevated, levels of the chemicals.

The 77 experts were also asked if, in their work or personal life, they had ever seen any evidence for a secret large-scale spraying program. All but one said no.

Davis said it was unclear whether this scientist had concluded that a secret spraying program existed.

Mick West, who runs a website that debunks conspiracy theories and who helped formulate the study, said the fact that one scientist in 77 had seen what he or she took to be evidence of spraying "shows that scientists are not immune to these sorts of things."

West said the new study should help sway people who might otherwise be convinced by a chemtrails website. "You're trying to hold back the tide to a certain degree, and hopefully have less people fall into that way of thinking," he added.

Davis said he viewed this study as the latest effort by scientists to ensure that accurate information is available to counter misinformation from nonscientists.

"It's incumbent on us as scientists to get scientific perspectives out there," he said. "What we've seen with climate change science is that ignoring the deniers hasn't necessarily been an effective route."