Stopping the world's most rapacious invasive species, one fillet at a time 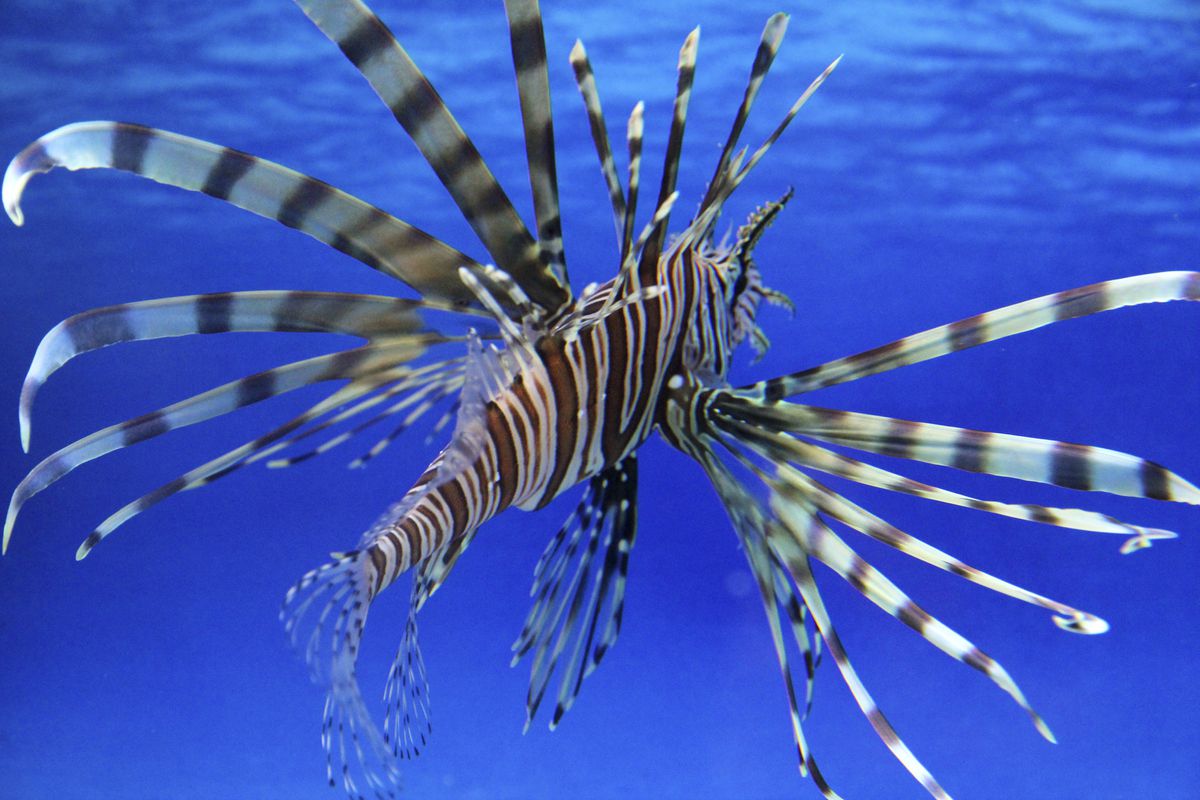 An undated photo of a lionfish. (Erik Olsen / The New York Times file)

An undated photo of a lionfish. (Erik Olsen / The New York Times file)

Since Pacific lionfish were first detected off the coast of Florida three decades ago, they have spread around the Caribbean, gobbling up everything that fits in their mouths and reproducing at a phenomenal rate. Scientists have shown that soon after they descend upon a reef, there is a sharp fall in the number of small fish, notably the herbivores on which coral depends for survival.

"They're eating their way through the reefs like a plague of locusts," said Mark Hixon, a lionfish specialist at the University of Hawaii.

It is by far the most destructive invasive species ever recorded at sea, and the blight is believed to have started with aquarium fish released off the Florida Atlantic coast in the mid-1980s.

However, in the last few months, a set of unrelated trends has resulted in two U.S. supermarket chains, Whole Foods and Wegmans, offering Florida lionfish, which has a white, delicate flesh, to consumers with much fanfare. Early signs suggest that the state's fishery might just be big enough to protect the native denizens of at least some reefs from being decimated.

"If the commercial fishermen can keep their numbers down, we should see an increase in the native species that are being eaten by lionfish," said Lad Akins, the founder of the Reef Environmental Education Foundation (REEF) in Key Largo, Florida, and head of its lionfish study project. "That would be the first time a commercial market controls an invasive species."

Popular among aquarium keepers for their stunning russet-and-cream stripes and 18 sharp, venomous spines that spread out like a fishing boat's outriggers, lionfish also boast modest space requirements (near stillness is their default state), a surprising resilience, and an awfully good bang for the buck (currently under $50 apiece) in the sometimes stratospheric market of tropical aquarium fish.

The lionfish is relatively common in the tropical Pacific but has a negligible effect on reef life there because it's never seen gathering in large concentrations, though exactly why this is so remains unclear; no predator has been identified. But in the Caribbean, where reefs are in far worse shape, it's a different story.

When Christopher Columbus traversed the New World, marine life was so rich that his chronicler wrote that the crew could almost walk ashore on the backs of swimming turtles. Underwater, marine biologists believe the scenery was then just the opposite of what one can see now: Instead of many multicolored little fish fluttering carelessly around a reef and the blue outline of an occasional shark or barracuda in the distance, large predators made up the bulk of marine life. Little fish were even more numerous, as is still the case near certain pristine Pacific islands.

As people settled on reef-fringed coasts everywhere, overfishing — decimating a population of a certain species faster than it can reproduce — first affected the larger species of edible fish, both carnivores like grouper and snapper and herbivores like parrotfish and wrasse. These grazers played an essential role in the reef: They prevented algae from taking over, leaving space for coral to grow — which provides shelter and food for smaller marine life.

However, when the big grazers grew scarce, algae blossomed, and coral started to die; then fishermen moved onto the smaller ones, too, accelerating the process. In the 1980s, a mysterious disease wiped out sea urchins, which are algae grazers and friends of the coral. So by the time the lionfish arrived in the Caribbean islands, peeling off the Florida coast to first colonize the Bahamas in the late 1990s, average live coral cover in the region had fallen to 14 percent from more than 50 percent in the 1950s, according to Alan Friedlander, a marine ecologist at the University of Hawaii who has been studying Caribbean reefs for more than 30 years.

"The lionfish found a reef system that was exceptionally vulnerable," Friedlander said. "The reefs are relying almost exclusively on the very fish that the lionfish are taking out."

As a result, offshore Caribbean coral reefs are now dying and crumbling faster, reducing the populations of fish that millions of people depend on for healthy, cheap protein and removing a bulwark against storms that will accelerate coastal erosion and the destruction of beachfront communities.

[With increase in shipping, Arctic braces for influx of invasive species]

At first glance, averting the disaster seems like a cakewalk: Spearing lionfish is so easy it doesn't even require a spear gun; a two-foot shaft with a barbed hook propelled by a piece of rubbed tubing is enough, because the lionfish can usually be approached to within two feet. Some can be found in the first 15 feet of water where snorkelers swim, though most live on the lower end of a scuba diver's range, below 100 feet. As they invaded the pretty reefs that recreational divers frequent, the divers started spearing them, keeping their numbers low and the coral healthy, particularly in places with large diving communities like the Florida Keys, Bonaire, the Caymans, and Cozumel, Mexico.

But the lionfish's average Caribbean density of four per 100 square meters has generally been too small to make it economical to fish for a living. Most lionfish make up a single portion; some can feed two. But their white, tender meat has led more and more restaurants to put them on the menu as the notion of eating the invader caught the imagination of much of the community press in Florida, to a far greater degree than the invasive (but less damaging) Asian snakehead has on the Eastern Seaboard.

Rachel Lynn Bowman, who describes herself on Instagram as a #lionfishhuntress in the Florida Keys, says her average is 50 speared lionfish a day, which she sells to Whole Foods or local restaurants. But until now scientists have believed that the commercial cull, just like that of the recreational divers, was too small to have any effect.

That's changing in the Florida Panhandle, particularly from Mobile, Alabama, to Apalachicola, Florida, where their density has risen more than tenfold to at least 50 per 100 square meters, says Kristen Dahl of the University of South Alabama. "They eat pretty much anything that fits in their mouth, and they have a predilection for young vermilion snapper," she said, referring to a popular commercial species.

Just when traditional fishermen were complaining that their fish traps were coming up with lionfish instead of the more valuable grouper or snapper, the Monterey Bay Aquarium's Seafood Watch program decided to list the lionfish as a "best choice," noting that "reduction or removal from the Atlantic, Caribbean and Gulf of Mexico will greatly benefit the native species." Whole Foods, which decides what seafood to sell in part based on the aquarium's recommendations, swung into action.

David Ventura, the company's seafood coordinator for Florida, was aware that his lobster suppliers often caught lionfish in their traps, so he offered them $3.50 a pound in March. "They sold faster than we could get them in," he said. In an interview shortly after the April 1 end of the lobster season, he said he'd love to get more lionfish but admitted he had no idea where to find them.

He learned fast. By mid-May, he had created a network of spearfishing commercial divers who helped him stock the 26 Whole Foods Markets in Florida with lionfish at $9.99 a pound. In an interview at the May 14 lionfish derby in Pensacola, which pulled in over 8,000 fish, more than tripling the previous record, Ventura sounded positively thrilled. He said he'd sold more than he expected that weekend and would now be offering it permanently at all the state stores near posters that read, "Take a bite out of lionfish — be a part of the solution."

"Almost every customer that's approaching our seafood teams [is] chatting about it," he said. "Demand is very strong, and given the dedication of the divers, I'm confident the supply will be there." In July, lionfish appeared in some stores in the South, Southwest, Rocky Mountains, and California, added McKinzey Crossland, a Whole Food spokeswoman. Wegmans, which has stores in New York, Pennsylvania, New Jersey, Virginia, Maryland, and Massachusetts, has also started selling it.

At the Pensacola derby, where several dozen tents displayed everything from lionfish dishes to toys, the mood was euphoric. A small community of divers that had been picking off the fish for years — sometimes selling their catch for $10 a pound to restaurants, sometimes eating it themselves — felt its time had come.

With sales soaring, Rebecca Jones, a former sales executive, invested her savings in a lionfish-fishing operation with Ty McCall, a professional diver. "We're pulling in 200 to 300 pounds a day," McCall said. Under one tent at the lionfish derby, waitress Clara Proctor, who has been devoting all her spare time to making and selling a tasty lionfish dip under the brand Edible Invaders, was hoping the lionfish's growing fame would allow her to quit her night job. At another, chef Irv Miller of Jackson's Steakhouse restaurant was serving up a delicious fried lionfish mousse.

Ryan Chadwick, who believes he's the first to serve lionfish in New York at his restaurant Norman's Cay, now offers it in four other restaurants and has opened a wholesale service. "Demand has really gone through the roof since the derby," he said. "A couple of years ago, most people hadn't heard of lionfish," said Dahl, the University of South Alabama scientist. "Now it's almost like there's a race to fish them."

But putting a dent in their numbers won't be easy. "We know that there are many, many places with big lionfish colonies way beyond the reach of divers, from 200 feet to 1,000," she explained. "So that means that a reef that's been fished out can be recolonized quite fast."

Akins, of REEF, agrees. "The question is: Will the small fish have time to repopulate the reef before the lionfish come back?" A trap that works across all depths with minimal bycatch "could be the silver bullet we've been looking for," he added. "A lot of very bright minds have been working on it, and now all this publicity is making it likelier that someone will come up with the right one."

Lionfish have also begun appearing in the Mediterranean, but colder waters there should keep their numbers down, says Friedlander, the marine biologist. But in Gulf and the Caribbean, "It's a race against the clock."