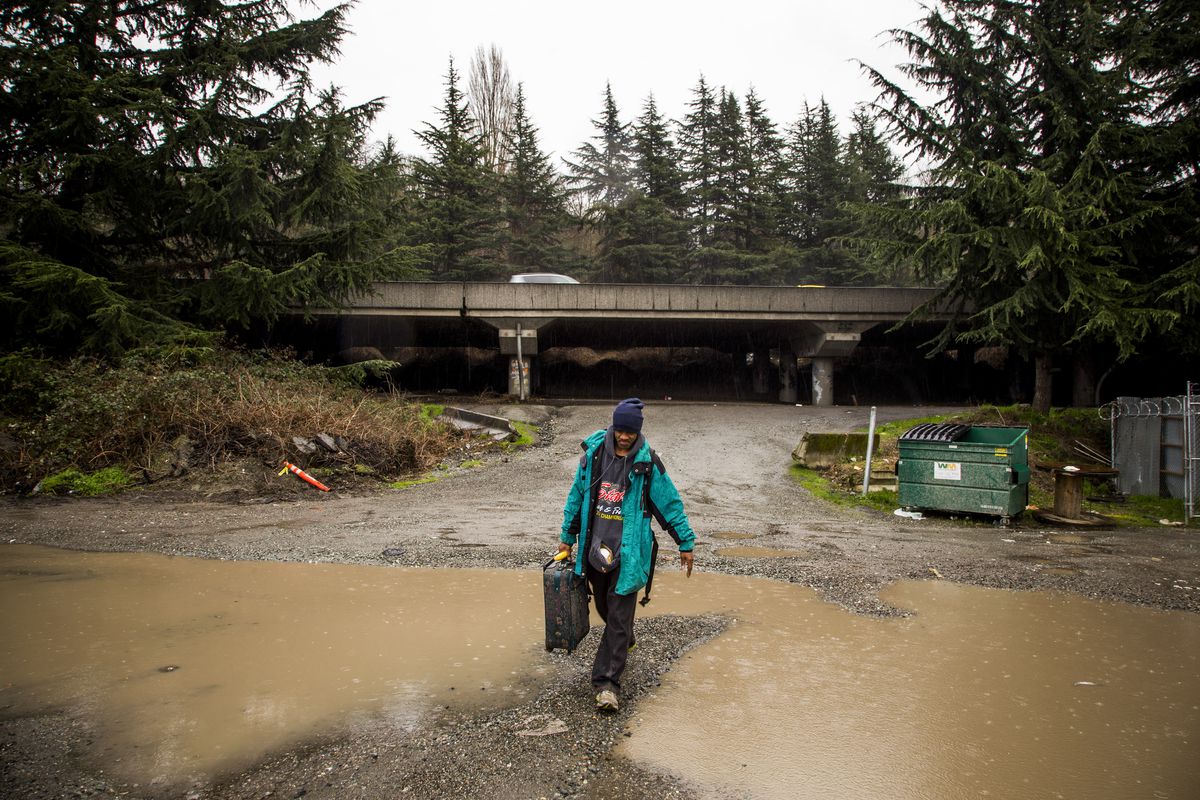 A man carries his suitcase away from a camp in Seattle, Feb. 13, 2016. The sprawling encampment under a highway, known as The Jungle, has become harder for Seattle residents to ignore as conditions deteriorate. (Michael Hanson / The New York Times file)

A man carries his suitcase away from a camp in Seattle, Feb. 13, 2016. The sprawling encampment under a highway, known as The Jungle, has become harder for Seattle residents to ignore as conditions deteriorate. (Michael Hanson / The New York Times file)

SEATTLE — The Heroin Task Force formed by Seattle Mayor Ed Murray and King County Executive Dow Constantine has endorsed the creation of safe-consumption sites for addicts, which would be a first in the U.S.

A majority of the task-force members support a place or places for addicts to use heroin and other drugs besides public restrooms, alleys or homeless encampments such as The Jungle, said Dr. Jeffrey Duchin, task force co-chair. The idea is that users could visit a supervised facility where they could get clean needles and anti-overdose medications as well as medical attention as needed and treatment opportunities.

The task force is working on formal recommendations expected next month, Duchin said, for what a model might look like and what legal hurdles it could face.

But such a site wouldn't directly address homelessness among addicts. The Jungle's population dropped by about 200 people after the mayor initiated intensive outreach efforts earlier this summer, but about 120 people remain. The vast majority have addictions, with heroin the most prominent.

Murray has proposed a dormitory-style homeless shelter modeled after San Francisco's Navigation Center that would allow pets, partners, storage for personal belongings, and intoxicated residents — unlike some shelters — as a way to coax residents out of encampments.

The model is helpful, said Kris Nyrop of the Public Defender Association (PDA), which also supports safe-consumption sites. "But you need to allow people to use on-site, so they don't in an alley or back in The Jungle," said Nyrop, an outreach worker and drug-policy researcher in Seattle for two decades. The Jungle is an encampment underneath and adjacent to Interstate 5.

He and others suggest the solution may be near REI's Seattle flagship store in an inconspicuous blue building known as "1811."

They're talking about 1811 Eastlake Avenue, which houses 75 chronic alcoholics who can drink in their rooms and avail themselves, if they choose, of treatment services on-site. A 2009 study published by the Journal of the American Medical Association (JAMA) said it saved taxpayers $4 million a year in housing and crisis services that would've been incurred had the inebriates been living on the streets. It also reduced their alcohol use by about one-third. A 2012 study by University of Washington researchers also found decreased consumption by 1811 residents.

"1811 is a great model, the kind of innovative solutions we should look at," Duchin said.

Patricia Sully of the Heroin Task Force agrees. "1811 Eastlake has shown great results, and there is every reason to believe that a similar model for people who use drugs would show equally impressive results," said Sully, a PDA staff attorney.

The head of the nonprofit that built and operates 1811 believes its model can be extended to illegal drugs. "The model is totally replicable for any population with addictions," said Daniel Malone, executive director of Downtown Emergency Service Center (DESC).

But Malone stresses that a solution doesn't necessarily have to go that far. What's paramount is a "housing first" policy that says getting someone into stable housing is an important first step toward dealing with any other difficulties they have.

"The first condition is you take them as they are," Malone said about housing that doesn't expect abstinence and offers services that may help treat a person's drug-use disorders.

Abstinence is not a requirement of the South Lake Union apartment building where Jackie Godfirnon, 60, makes her home. And she might not have a home at all if it were, she said.

Long-standing addictions to heroin and crack cocaine, plus a criminal record, kept her out of extended-stay shelters and from obtaining a place of her own, Godfirnon said. For the last six years, she's rented a studio apartment at the Canaday House, one of several supportive-housing complexes operated by DESC. The modest apartment provides her a safe, clean place in which to manage the methadone treatments she depends on to keep her cravings for heroin at bay.

"Coming here made it easier to focus on doing what I should be doing to try and stay clean, on what I already should have done a long time ago," she said.

But staying off other drugs remains a struggle. Scrawled on a white sheet of paper taped to the inside of Godfirnon's front door is a mantra: "No more crack, Stay strong." She said she breaks it nearly every day. "This is why people stay on the streets, because sometimes you need something else to get by," she said. "You just can't drop a habit because people say you have to."

Some struggling with addiction might not want to live in a place where they are surrounded by residents with similar problems and temptations that might arise if a safe-consumption area were part of their building, Malone said.

Others may find support and community in 1811-style housing.

"To our thinking, it's best to have both kinds of options," Malone said. The Public Defender Association has suggested a Navigation Center-like facility could be next to a safe-consumption site, or part of the same building.

Most of us can go home, if we like, to a fully stocked bar and variety of legal marijuana products. "That's the privilege of being housed," Nyrop said. "But when people are homeless, we assume they're ready to give those up, but they aren't. For many, they place a higher value on those freedoms than permanent housing."

That's why some remain in The Jungle instead of moving into shelters or housing with strict rules and mandated treatment.

"People aren't rejecting getting better or housing, but rejecting rigid programs where social workers or others tell them how to live," said DESC's Malone.

[Anchorage homeless shelter at capacity as evictions from camps continue]

A better option is to provide housing that "meets people where they are," he said. "They'll take it when you offer a price they're willing to pay, and that often comes down to autonomy."

Taxpayer-funded housing where illegal drugs are consumed is likely to be controversial.

Before it opened 1811 Eastlake, DESC faced a 28-month delay from a lawsuit filed by nearby property owners. Some media voices, such as The Seattle Times editorial board, criticized the model, saying it should require residents to quit drinking. (Times editorial writer Jonathan Martin recently endorsed safe injection sites.)

A Sodo business association has written to city officials about The Jungle as a "refuge for gangs, prostitutes, addicts, thieves and felons."

Angi Davis, president of the Sodo Business Improvement Area (BIA), is frustrated that The Jungle remains open. Closing homeless camps would be a form of "harm reduction," Davis said. "Leaving the camps open but giving them porta-potties is not that."

Whether safe-consumption sites are going to work isn't the BIA's call, she said.

"We heard the same objections around needle exchanges and methadone, that it was just enabling," said Duchin, health officer for Public Health — Seattle & King County. "Now we know those are wrong. Methadone is a very important tool. I'm optimistic we'll see sort of an evolution of thinking."

Seattle has won kudos from PBS and the U.S. surgeon general for its "harm reduction" approach to the heroin and opiate epidemic, which stresses treating — not jailing — addicts, because they have a disease, not a character flaw.

But neither PBS nor the surgeon general ventured into The Jungle, Seattle's largest open-air heroin-shooting gallery. And nine months after the mayor declared Seattle's homelessness an emergency, little has been done to address squalid conditions in The Jungle and reduce harms there, ranging from rampant human waste and brazen rats to bursts of violence and overdoses.

Estimates of how many people remain in The Jungle vary, but among those who do are some for whom existing shelters are less than ideal.

Despite the conditions, Jen, whose last name is being withheld, said she prefers The Jungle because of its proximity to a local methadone clinic and the independence it affords her and her partner, Richard. Both struggle with heroin addiction and chronic pain, she said. "And we both need some solitude to manage it," she added.

But if a low-barrier housing option were to become available, Jen said the couple would be open to giving it a try. "I might not need a safe injection space, but having a clean place where you can come and go as you please would be great," she said.

Nyrop, the outreach worker, said, "It's often mentioned that Seattle is well-known for harm reduction. We're also well-known for process, for coming up with a solution, then complimenting ourselves and not acting."

Duchin said limited data about 1811 and similar models is a reason for policymakers to "move slowly and cautiously."

If something like 1811-for-opiates were recommended, Malone said he didn't think it would be hard to find homeless people wanting to move under its roof.
"We had to talk to 79 people to get 75," he said of 1811's first wave of residents. "I think the same phenomenon would occur if we had enough housing for people sleeping under I-5 and using substances."