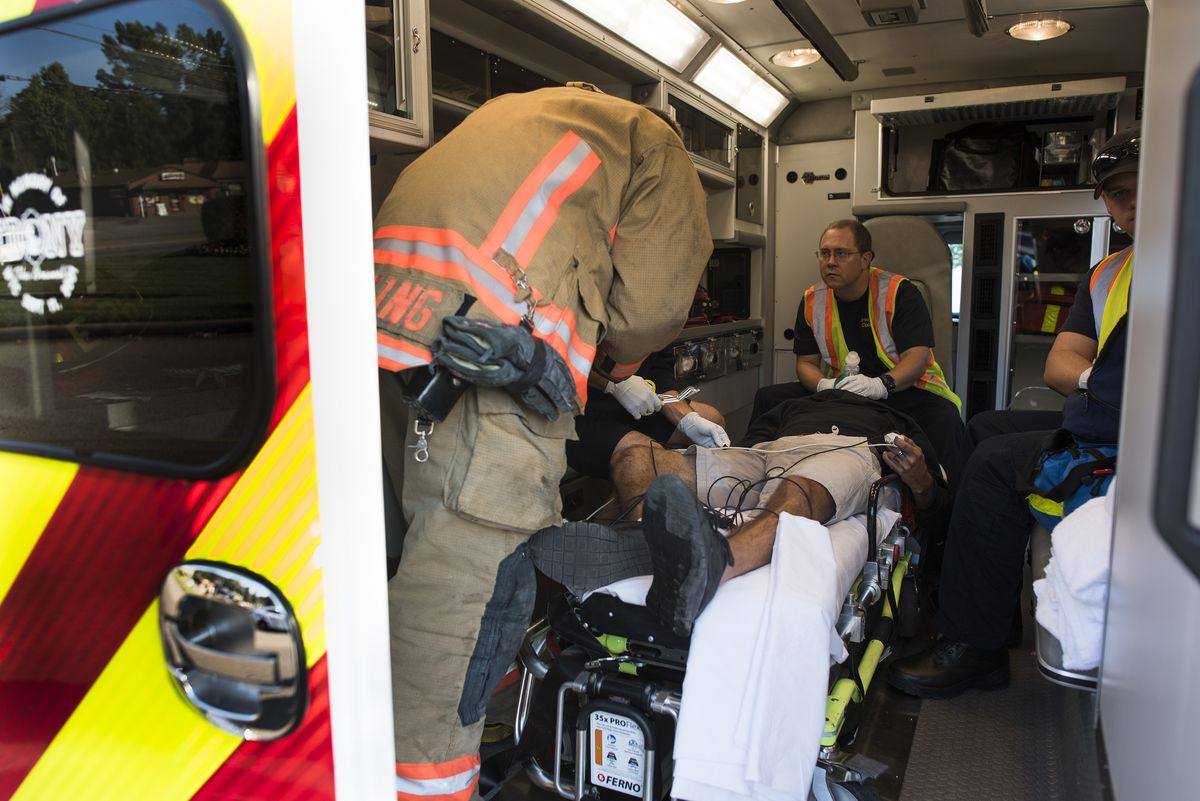 CINCINNATI — On the day he almost died, John Hatmaker bought a packet of Oreos and some ruby-red Swedish Fish at the corner store for his 5-year-old son. He was walking home when he spotted a man who used to sell him heroin.

Hatmaker, 29, had overdosed seven times in the four years he had been addicted to pain pills and heroin. But he hoped he was past all that. He had planned to spend that Saturday afternoon, Aug. 27, showing his son the motorcycles and enjoying the music at a prayer rally for Hope Over Heroin in this region stricken by soaring rates of drug overdoses and opioid deaths.

But first, he decided as he palmed a sample folded into a square of paper, he would snort this.

As he crumpled to the sidewalk, Hatmaker became one of more than 200 people to overdose in the Cincinnati area in the past two weeks, leaving three people dead in what officials here called an unprecedented spike. Similar increases in overdoses have rippled recently through Indiana, Kentucky and West Virginia, overwhelming ambulance crews and emergency rooms and stunning some anti-drug advocates.

Addiction specialists said the sharp increases in overdoses were a grim symptom of America's heroin epidemic, and of the growing prevalence of powerful synthetic opiates like fentanyl. The synthetics are often mixed into batches of heroin, or sprinkled into mixtures of caffeine, antihistamines and other fillers.

In Cincinnati, some medical and law enforcement officials said they believed the overdoses were largely caused by a synthetic drug called carfentanil, an animal tranquilizer used on livestock and elephants with no practical uses for humans. Fentanyl can be 50 times stronger than heroin, and carfentanil is as much as 100 times more potent than fentanyl. Experts said an amount smaller than a snowflake could kill a person.

"We'd never seen it before," Sammarco said, while toxicologists and drug specialists on the third floor of the coroner's office tested blood samples and small bags of white powder. "I'm really worried about this."

Officials suspect the carfentanil is being manufactured in China or Mexico and is making its way to the Cincinnati area in heroin shipments that flow north on interstates 71 and 75. The drug has shown up in Columbus, Ohio, the Gulf Coast of Florida and central Kentucky, according to local news reports.

Fentanyl is widely used in hospitals as a fast-acting painkiller, but Sammarco said carfentanil is rare. She said she had to call zoos, rural veterinarians, federal law enforcement authorities and a licensed manufacturer in Canada to find a sample that her office could use to calibrate their drug-testing equipment.

Around Cincinnati, police officers and sheriff's deputies are so concerned about the potency of carfentanil and other synthetic opioids that they carry overdose-reversing naloxone sprays for themselves, in case they accidentally inhale or touch the tiniest flake.

Because of its potency, law enforcement agents have stopped field-testing the powders they find at the scenes of overdoses. When regional drug enforcement officers in Cincinnati pulled over two men on Aug. 26 and found an unknown pink substance, they sent it directly to the county coroner's office; it tested positive for heroin, fentanyl and carfentanil.

And as ambulance crews and the police rushed to respond to this recent wave of overdoses, answering 20 or 30 calls each day, they said they sometimes had to give people two, three or five doses of naloxone spray to revive them. Usually, one quick spray is enough to block a person's opiate receptors and immediately jolt them out of an overdose. Some hospitals have had to give overdose patients intravenous drips of anti-opioid chemicals.

"Our antidote, our Narcan, is ineffective," Sheriff Jim Neil of Hamilton County said, using a trade name for naloxone. "It was meant for heroin. It wasn't meant for fentanyl or carfentanil."

Like much of the country, officials here along the Ohio-Kentucky border have been straining to cope with the toll of opioid use.

Accidental drug overdose deaths in Hamilton County doubled to 414 last year from 204 in 2012, according to the county coroner, most of those involving fentanyl or heroin. There were an average of 92 overdose reports each month during the first six months of 2016, up from an average of 40 during the last half of 2015, according to numbers collected by the Greater Cincinnati Fusion Center, a regional law enforcement and public health group.

As deaths mounted, officials formed anti-heroin coalitions and task forces. Police officers and addiction experts visited the homes of people who had overdosed to try to persuade them into treatment. The Cincinnati Enquirer even has a heroin beat reporter.

Nan Franks, the executive director of the Addiction Services Council, the Cincinnati affiliate of the National Council on Alcoholism and Drug Dependence, said the problem was made worse by scarce bed space at the area's lone publicly funded detox center and a constant lack of money for treatment services.

Franks said drugs were so cheap that addicts said they can walk through one housing project and get four free samples from dealers.

"People are waiting for treatment," Franks said. "We need a better response to keep them safe."

Five days after Hatmaker overdosed, a police car pulled up outside his home in Norwood, an independent city of 20,000 inside Cincinnati. Lt. Tom Fallon, the commander of the county's heroin task force, was there to take Hatmaker to treatment.

As they drove, Hatmaker thought back to how he had gotten there. He said he started selling pain pills in 2012 after being laid off from his job at an online retailer's warehouse, then started taking them, then turned to heroin. Cycles of withdrawal, jail and treatment followed. Some of his friends died or went to prison for selling drugs.

He said he does not remember much from this latest overdose — only waking in an ambulance and feeling the pain where medics had pounded his chest to keep him alive. The medics who saved him told him he was minutes from death, Hatmaker said.